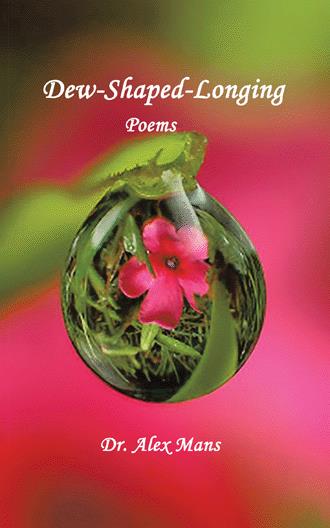 To burn all dullness
All idleness and idols
No still fear of death
Peace in soul and universe
Let's chant all together
No self-esteem
I have work to do
The sun will embrace the night
My worship is working enthusiasm
Collectively we repeat
Good, good, happy, happy
Joy, Joy-gotta, gotta
Yes, Yes, hi, hi

Dr. Alex Mans has different dimensions in his life; scientific side, the literary side, philosophy, religion, political and human rights supporter side, business, industry side, healthy lifestyle, and sports side. He was born in Iran and later had become a Belgian citizen. He had finished his first Ph.D. in philosophy and religions. When he was 26 years old, he had written his Doctorate (Ph.D.) about the analogy between religions and Indian philosophy. Then he had gotten a second doctorate (Ph.D.) on management strategies and organizations from the University of Istanbul in Turkey when he was 31 years old. He has three M.S in Financial Analysis, Marketing new brand, and Project Management. He wrote a book about comparing export models worldwide, offered a new export model for underdeveloped countries, and offered an original export method from Turkey. He had received the first honor and pride medal from Turkey's deceased president Mr. T. Ozal for developing country export. He also wrote other books named model of control for top management and comparison between five hundred (500) biggest companies and associations in all the world. He has been teaching in multiple universities in different countries since 1989, such as Strategy Management, Market, Finance, The Control Mechanism for Top Management, Stock Exchange Market and Organization lessons. He had written many leaflets on these subjects and has organized many management sciences, literary and self-uplifting seminars in different countries. He became chairman of many scientific, academic, business, and human rights supporter committees and organizations. He had gotten many sports cups in tennis and some other activities. He was active in the Ecology Party in Belgium during the 2006 election. He continued his activities as a human rights supporter. He had established his own business in 1990 in different countries, such as producing air compressors and pneumatic tools in Turkey, folded glasses business in Belgium, UPVC double face windows in Azerbaijan, and an international trade center in Iran. He is an expert in the stock exchange market, project management, financial analysis, and creating a worldwide brand. He recently started the BCDEM path for a healthy lifestyle and opened Spa, Gym centers in Belgium. During his five years living in high isolated security prisons alone in Israel, for a false accusation, he has been developing new methods for learning languages in a short time which; he has been testing this method with others in ten weeks period since this idea had sprouted, so he has prepared books about learning in ten weeks for the following languages: English, Turkish, French, Persian, Azari, and Arabic. As he knows several languages, he wrote poems in many different languages with experiences that had started from childhood, and philosophy novels, which are in English, then became more than four thousand pages of poems and three thousand stories. According to the English chapter, he translated and illustrated the Holy Quran to English and a dictionary of the Holy Quran. As he knows all the philosophies, religions, and management science, he develops some methods for increase human ability, incredibly usable in industries based on Taylor and Fayol's theories. Also, he creates a new theory on tax payment for underdeveloped countries. He believes humans are a gerund of God and have possibilities till Divine, so he established many progressive self-uplifting and ability-discovery centers in different countries. He is called a scientist and professor by everybody with great respect for all his efforts for science, human rights, and developing centers in many countries.