DESECRATORS OF THE SACRED TRUST

The Apotheoses of Donald J. Trump and Isaias Afwerki. Two Preening Would be Kings and Their Dark Agendas 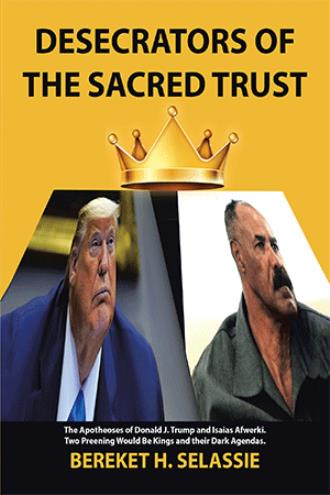 We are concerned with two different leaders of two different countries, with more contrasting rather than comparing characteristics. Perhaps the contrast may even justify such study. I owe the reader a word of explanation why I chose to do a comparative study of these two leaders - one American, the other African. Comparing two leaders from two countries with striking contrast in size, history and government structure may seem strange. America is the most powerful country on earth with a population of over three hundred and thirty million; Eritrea is a small African country with a population of under six million. America is a democratic republic with a constitution two hundred and thirty years old; Eritrea is a dictatorship ruled by an unelected former guerrilla leader who suppressed a ratified constitution and rules by decree. Aside from the fact that common traits of character constitute a proper ground for such a comparative study, there is a specific reason for my choice of Isaias in comparison (in contrast) to Trump. The contrast relates to the historical and socio-political context in which the two leaders operate. The source of power and conditions of operation of Trump’s presidency is grounded in one of the best (if not the best) constitutions ever designed in human government systems--the Constitution of the United States. One of the most important questions this study seeks to answer is whether President Trump has lived by the promise of the constitution in his behavior and performance as a president. Indeed, his impeachment supports a presumption (yet to be tested) that Trump has done things that provide prima facie evidence that he has not lived up to the promise of the constitution. As a student of constitutional law and one-time practitioner of law and government, I am deeply interested in the raging controversy concerning the impeachment of president Trump and his abnormal "unconventional" behavior toward people who did not do what he wanted them to do as demonstrated by his denigration of Senator Mitt Romney for being the sole Republican senator to vote finding him guilty of the impeachment charge of abuse of power, in violation of the constitution.

Two different leaders, with more contrasting characteristics. Comparing the two leaders from two countries with striking contrast in size, history and government structure may seem strange. America is a democratic republic with a constitution two hundred and thirty years old; Eritrea is a dictatorship ruled by an unelected former guerrilla leader who suppressed a ratified constitution and rules by decree. However, both leaders are dedicated to the destruction of, or at the very least, the demeaning of the primary values of the democratic epoch, namely, democracy and rule of law.

Bereket H. Selassie is an Emeritus Distinguished Professor of African Studies and Professor of Law at the University of North Carolina at Chapel Hill. His Memoirs, The Crown and the Pen (2007), relates the story of a man who straddled two worlds—a progressive lawyer and Attorney General of Ethiopia’s Emperor Haile Selassie. He thus struggled for justice within an archaic system, bedeviled with imperial Court intrigues. He was banished to a distant province, and eventually escaped to his native Eritrea where he joined the armed struggle for independence. His Memoirs as well as his novel, Riding the Whirlwind (1993), paint a dramatic picture of a tumultuous life saddled with tension involving opposed ideas and forces. Out of Africa, Selassie settled in America and began an academic life, writing over a dozen books, including works of fiction. Defiance…is his third novel. He was appointed to head a Constitutional Commission that drafted a new Constitution of Eritrea.