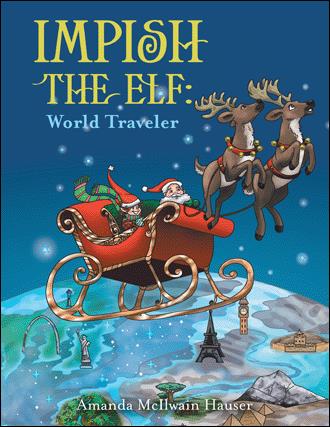 The thought of an adventure, brought light to her dull cheeks, A scarf around her neck and feeling warmer than in weeks, Impish boarded and she buckled up; she held on super tight, Santa coaxed his reindeer, “Ho! Ho!” and glided through the night. Continents and wide oceans, mountains and vast plains, Flashed silently below them as Santa pulled on the reins. The Serengeti, Great Wall, the Pyramids too, The rainforest, Mt. Everest, and Timbuktu, The Eiffel Tower and grand Lady Liberty, Big Ben himself, the Opera House in Sydney. Each wondrous destination marked on Santa’s map, Which lay like a quilt across Impish’s lap, Was a miracle, a gift, to the wrapping elf’s heart, As she spied children there who had each been a part, Of the tricks and the clues and the gifts she prepared, To bring light to the darkness, to show how she cared. Their smiles told stories she never before knew, She listened to their whispers; her joy slowly grew, To the top of her throat and out through her lips. Ideas flashed through her brain like the crack of a whip! 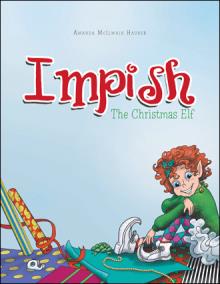 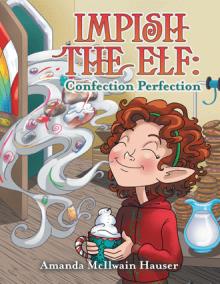 Impish the Elf is not your traditional gift-wrapping elf! Sure, she wraps gifts for Santa to place under the tree, but she never puts nameteags on anything. Rather, Impish leaves her clue-of-the-year in children's stockings to help them discover which presents are whose on Christmas morning! In the second book in the series, Lil' Impish travels the world looking for inspiration in the faces of those children whom she has delighted with her gift-wrapping antics. To which magical lands will she take you this Christmas? She left you the clues...!

Amanda McIlwain Hauser makes magical childhood experiences her mission. As a mother of eight children, an elementary teacher, and an author, Amanda spends most of her time creating ways to engage children. Keeping magic a part of childhood has always been her passion. Growing up on a farm in rural Indiana, she spent all her free time crafting, experimenting, creating, imagining, writing, and exploring, and those expressive threads have followed her through all seasons of life. Earning writing awards throughout her childhood, Amanda continued her education at St. Joseph’s College in Rensselaer, Indiana, where she graduated valedictorian of her class with a degree in elementary education. She went on to earn her Master of Education degree in Curriculum and Instruction from Indiana Wesleyan University. After teaching nearly fifteen years in the public classroom, Amanda homeschooled her children with a self-created year-long curriculum that immersed the family in various learning experiences across the United States. But, learning didn’t end during holiday breaks for the Hausers! Impish has visited the family for nearly fifteen years, bringing challenges, clues, and riddles to encourage imagination, collaboration, and excitement on Christmas morning. But, most of all, Impish’s antics heighten the anticipation and magic children feel during this important time of year. In her first book, Impish the Christmas Elf, Amanda began sharing the tradition of the creative gift-wrapping elf with the world. In Impish the Elf: World Traveler, the second book of the Impish series, the world itself is Impish’s clue-of-the-year. Join Amanda and the Hauser family in this unforgettable Christmas gift-giving tradition!