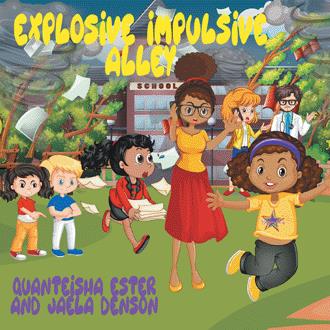 Alley is an energetic 9 year old girl who often gets told that she is hyper and impulsive due to her being diagnosed with Adhd (attention deficit hyperactivity disorder) and Odd (oppositional Defiant Disorder) seems like Alley makes trouble everywhere she goes and everyone feels like there is no hope. Explore how Alley overcome her challenges with the help of her mom in a fun, funny, energetic, impulsive, explosive way.

Quanteisha Marie Ester is a mom who wanted to give children a voice, a platform, and an outlet. She thought writing was the best way to convey these things. Quanteisha and her ten-year-old daughter Jaela have written many books together as a family. They wanted to raise awareness of mental disabilities and shed light on the effects they have on families and the community.Quanteisha Marie Ester was born and raised in little Rock, Arkansas. In 2002, at age fourteen, Quanteisha and her family moved to Kansas City, Kansas. She graduated from high school in 2006 with a basketball scholarship; she then went to college, where she studied criminal justice. After college, Quanteisha put her abilities into going to school to be a train conductor. In 2008, she began a career at BNSF Railway, where she currently works.In 2009, Quanteisha gave birth to an amazing little girl by the name of Jaela. Early on, she knew Jaela was a beautiful, special gift. Jaela was diagnosed with attention deficit hyperactivity disorder (ADHD) in 2015 but showed signs as early as three years old.After exhausting all her options, Quanteisha founded Infinite Stars Incorporation, a nonprofit organization for children who have mental, behavioral, and learning disabilities. The organization raises awareness for children and families who share similar unique diagnoses. Quanteisha furthered her knowledge and educated herself on mental and behavioral health in ways that benefit her, Jaela, her community, and families all over the world. She is a holistic health practitioner certified in meditation, crystal therapy, detoxification, and aromatherapy. She is an herbalist, spiritual guided counselor, life coach and speaker. She is certified in reiki I and II and much more.Quanteisha Ester is a vegan woman who possess a heart of gold. She is very ambitious and has innate abilities, talents, and many spiritual gifts. She believes in systematically transforming the minds, beliefs, and environments of children and families who have mental, behavioral, and learning disabilities. She is instrumental in introducing and igniting endless possibilities by implementing holistic alternatives, effective programs, and educated and resourceful environments for the success and growth of our children.With love, positivity, encouragement, motivation, confidence, and compassion she guarantees the individual growth and success of our children in a life-changing environment with Infinite Stars Inc., where we ignite endless possibilities.

Jaela Marie Denson was born in Overland Park, Kansas on August 18, 2009. She is in the fourth grade and enjoys spelling, reading, writing, and playing with friends. She enjoys playing video games, music, roller coasters, theme parks, fun, adventure, and doing fun activities with her mother. Jaela has a heart of gold; she is very inquisitive and wants nothing but to shower everyone with love. Jaela dreams of one day becoming an entrepreneur, as she wants to make a difference in her community and the world!Jaela wanted to share her story of having ADHD with the world by writing a book on her everyday struggles and difficulties and the influence it had on her life, her mom, and her community. She hopes to help children and families all across the world know that there is an answer and that they are loved, valued, worthy, and wanted. You are her friend, and she accepts you for you.