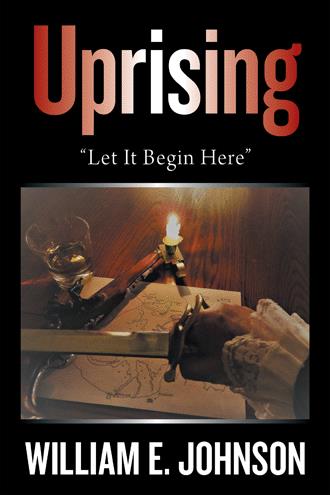 It was a common sight to see those in chains escorted toward Boston Neck; hence, the main guard ignored the small entourage. Teezle found himself breathing easier as they finally turned east on Milk Street. He glanced over his shoulder at Imp. “It worked. We’re almost home, where we can—” “What do we have here?” came a booming voice from across the street. Two redcoats, one a sergeant, on their way to relieve the Province House guard, rushed across the street. Both soldiers were chuckling. “Where are you taking these prisoners, Corporal? The Queen Street gaol is the other way.” Zeke’s eyes grew larger as his lips tried to form an answer. Ben Edes quickly blurted out a response. “They just dragged us from gaol on a night work detail…er…down on Griffin’s Wharf, it is.” The two redcoats stepped closer. “What in hell is this? Prisoners don’t ever speak, exceptin’ in court.” The sergeant advanced so he was eye to eye with Zeke. “Let me see your orders, Corporal.” Teezle stepped back and lowered his musket, praying his bayonet would keep his interrogator at bay. The other redcoat interrupted, a tone of alarm in his voice. “Come here, Sergeant. This private is wearing the coat of the 29th. They ain’t been here since—” In an instant, John Gill used all his strength to swing his chains at the redcoat sergeant’s head, propelling him into Zeke’s extended bayonet. The other redcoat shuddered in disbelief. “Sergeant, what is—” He never finished the question, as Imp’s bayonet found its mark in the man’s chest, silencing him forever. Meanwhile, the redcoat sergeant slid slowly off Zeke’s bayonet and fell quivering in the middle of the street, blood gurgling from his lips. In moments, he, too, was quiet. The seconds seemed like hours before Imp broke the silence with a soft whisper. “What do we do now, Mr. Teezle?” “Teezle? Teezle!” muttered Ben Edes. “Zeke Teezle—holy mother of God. It is you!” John Gill, little more than the size of the candlemaker, glanced up and down the street. “Now that we know we’re among friends, I suggest we get out of sight.” Zeke licked his lips, his mind dancing. He was three doors away from his shoppe, and it was clear he couldn’t leave two dead redcoats near his home. “You’re right, Mr. Gill, but we gotta get these two redcoats out of sight.” Imp leaned on his musket. “Just where do you put two dead redcoats, if you don’t mind my askin’?” Teezle closed his eyes for a moment, trying not to visualize the killings and dead men he had seen before. “My shoppe is just three doors down. Let’s drag them to the rear by my privy, just like we did before the…er… That will at least hide them for a time.” Fifteen minutes later, Edes and Gill were sitting in Teezle’s workshop, free of their shackles. The two dead redcoats had been covered with old sailcloth at the rear of Zeke’s privy. Ben Edes sat back, rubbing his chaffed wrists and relishing the warmth of the hearth. He stared at the candlemaker in wonder. “You stuck your neck out for us this evening, Mr. Teezle. Why?” Zeke stowed the tools he had used to break the shackles and sat down in seeming exhaustion. He rubbed his eyes. “Why I did anything ain’t important because we ain’t finished. I still gotta get you out of Boston.” Gill glanced at his partner. “Out of Boston? How in hell do you propose to do that? You just killed two redcoats and—” Teezle waved his hands for quiet. “You gotta understand, and don’t ask about who or why. The fact is, I have a pass to get out of Boston Neck. I just gotta hide you two on that wagon out back and drive you out. It’s that simple.” Edes gazed about the workshoppe. Finally, his eyes rested on Imp. “What about Imp here? What is he supposed to do in that redcoat uniform? And for that matter, what are we supposed to do once we’re out of Boston?” Gill began pacing, thinking aloud. “If we are headed to the countryside, Ben, we should take our press with us. That way, we can tell the whole colony what happened here.” “That wagon can hold our small press, inks, type, and everything we need to set up shop,” said Edes. “And I know just the place—in Watertown. I have friends who can—” Zeke jumped to his feet. “Wait, just a minute here. My job is to get you men out of town. No one said nothin’ about movin’ presses and such. Besides, my Gertie will be back and—” Edes folded his arms across his chest, towering over the candlemaker. “We don’t leave this workshoppe unless we first head to the Gazette for our press. There’s no other way.” Zeke paced in circles, his arms waving. “How in hell did I get in this…? There is no way to…” He stopped and jabbed his finger at Imp. “Pvt. Imp! I have one more mission for you tonight, but first…come with me.” To the printers, he added, “Just sit tight. We’ll be right back.” Imp followed Zeke as he rushed out the rear door. Minutes later, they returned, and Teezle tossed two redcoat uniforms on the floor. “Mr. Edes…Mr. Gill, put these on over your clothes. They might not fit exactly right, but in the darkness, it shouldn’t matter.” John Gill’s eyes widened. “But aren’t those the uniforms those two redcoats were—?” Zeke rubbed his hand over his face. “Yeah! It’s theirs, but they ain’t got no use for ’em. Besides, I don’t need anyone findin’ dead redcoats near my privy. Right now, all they are is two naked dead men under a sailcloth. Now, hurry! I don’t need my wife findin’ four redcoats in my workshoppe.” 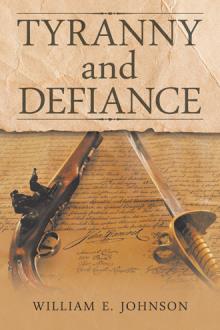 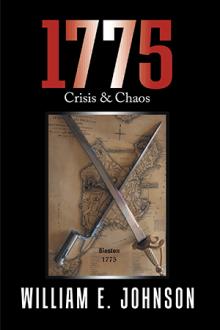 A single gunshot had shattered a sinister silence and eight bayonet-bludgeoned militiamen lay dead on Lexington Green in the early dawn of April 19, 1775. So begins William E. Johnson’s fifth in a series of six historical novels about British subjects discovering they had become Americans. It is another mug of colonial intrigue brimming with sex, scandal, spies, and soldiers. More than ten thousand colonists lay siege to nearly four thousand British soldiers in Boston. Meanwhile, John Hancock and Sam Adams join the Second Continental Congress in Philadelphia where they connive and conspire against the blatant tyranny of the British Crown. When spies and assassins invade Philadelphia, American history stands at a defining moment. Once again, the heart of this saga lies in the bosom of the common man — candlemakers, cobblers, sailors, soldiers, silversmiths, tailors, trollops, bartenders, ropemakers, doctors, and drunks. Every tyrannical declaration made in London had a disastrous impact on every American colonist. This is their story…and ours. Travel back in time as you settle back near the hearth in the Snug Harbor Tavern taproom with a mug of hot buttered rum or dark ale. You now witness the bloody beginning of the American Revolution in Lexington in the first page of UPRISING.

William E. Johnson, with a commission in Naval Aviation, was stationed in Boston, MA, where he became absorbed in the rich colonial history of the region. More recently, he has enjoyed acting in the role of John Hancock in the stage play “1776”. These events led him to write his first novel, Snug Harbor Tavern: Shaggin’ for a Shillin’, based on the activities of our nation’s first patriots in colonial Boston. This was followed by The Seeds of Love—and War, Tea and Tyranny; Still Shaggin’ in Boston, and Tyranny and Defiance, The saga continues with Uprising: “Let It Begin Here”. He lives in Latrobe, PA where he conducts seminars nationwide on safety, OSHA Compliance, and leadership. In the persona of John Hancock, he speaks nationwide providing a living history of our nation’s founding. His website is www.history1776.com.