FROM WHERE I SIT

Poems and Sketches from later years 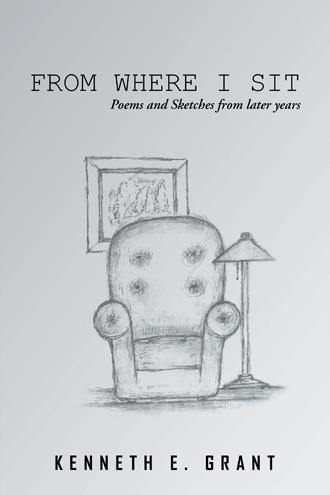 The author has described the poems in this book as the “songs in my heart” since they reflect the many varied experiences life has offered and the colorful variety of people he has been privileged to know. They also reflect the profound impression the natural world has left upon him. Through his poetry he seeks to share these experiences with others. Through his sketches he shares his keen observation of people and nature as seen through the eyes of a mature and sensitive soul.

Ken Grant, a retired Presbyterian minister, lives with his wife, Beverly, in Pasadena, California. Born in Los Angeles and raised in nearby Glendale, he was a “movie moppet” (bit player and extra) during his teen years, then served with the U.S. Navy in the South Pacific during World War Two. Returning afterward, he completed his education at the University of Southern California. Following seminary training, he spent nearly forty years pastoring churches in California and the Midwest, including parishes in Iowa, Arizona, Missouri, and Colorado. Ken’s interests are broad, and his sympathies wide as his poems written over many years suggest. Some reflect his experience overseas, others a brief time in the business world. Many others, however, were born of his years spent pastoring various churches and the fascinating people met along the way. Ken’s previously published books include Ponderings (1986), a collection of stories about country folk and their relationship with “The Almighty” as told by an old cowboy. The second book, Thunderhead (2014), takes its title from the first poem in the book and is followed by several subjects, then ends with a poem from the old cowboy. The present volume, From Where I Sit, embraces five sections of poetry: the product of a long life and richly varied experience of a sensitive soul who continues to write and stay very much alive in his senior years. The sketches that conclude this book are by the author, whose hobbies include sketching and painting scenes and faces.