The Tavern where evil gathers for a cold beer 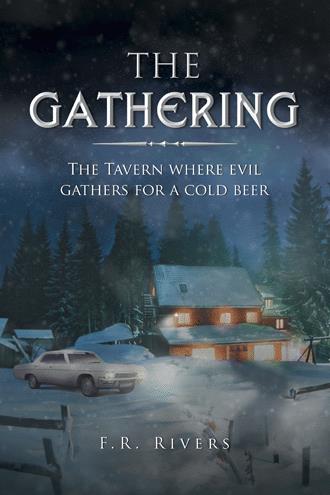 It was during their trip to the garage that Ken found himself squeezing the crowbar in his right hand between the seats and next to the emergency brake. Once the vehicle was between two street lights, and the cab of his vehicle almost black, he cocked the crow bar back and swiftly swung it as hard as he could toward his passenger’s head. The bar struck his passenger cleanly on the bridge of the nose, and before the young man knew what was happening, he had been struck two more times with bone shattering results. The second strike made a strange sound, almost like glass breaking, as it struck the top of the young man’s mouth. The third strike made a sickening sound like a rug being beaten with a long stick. The striking of this young man was exhilarating for Ken. Just after striking his passenger a third time and using his peripheral vision, Ken could not tell if the man was dead or alive. If his passenger so much as twitched, he’d wallop him again. To Ken’s disappointment, there was no movement. Ken pulled over in a dark, deserted rest-stop and briefly admired his handiwork. As he restarted his vehicle, he said to nobody in particular, “The fucker sure made a mess, I better pack a tarp next time”. As Ken completed the short trip home, he chortled at the thought of getting pulled over and having to explain a dead guy in his passenger seat. However, he was not truly concerned, because the two officers on duty at this hour were sleeping in their cruiser several miles away. One of the positives (or negatives, depending on how you look at it), of living in a small town is that everyone knows what everyone else is doing. It is true from my observation that small town people are the most predictable people in the world. As Ken drove into his long, dark driveway, he realized the body would have to be buried the next night as he would have to use his backhoe to dig the hole during the day. It certainly would raise suspicions from his nosy neighbors if he started the backhoe at this time of night. He would have to wait until tomorrow evening to move the body under the cover of darkness. Ken moved his vehicle close to the garage and rolled the body out of the passenger seat and onto a large blue tarp. He had always kept a tarp on his second garage bay floor just in case he had some work to do. For some reason, the second garage bay was kept immaculate; he hardly ever worked in that section, other than to store some seldom used tools. As he admired his handiwork once more, he maneuvered his victim down onto the center of the tarp. To his amazement, he realized that Pancho was somehow still alive. Ken heard a faint gasping and whistling sound coming from his victim’s face, although it was hard to tell exactly from where. This guy’s face was a mess, and it was hard to tell where his nose ended and his mouth began. Ken looked carefully and saw that blood was bubbling and he heard a faint but steady gurgling sound coming from somewhere in or near his chest. Ken was extremely fatigued from his unplanned attack on this unknown man he’d nicknamed Pancho, so he procured his sledge hammer, took aim, and promptly finished the job with just one swing to the head. To Ken’s extreme dismay, this made a large and gory mess on the spotless side of his garage. He didn’t look forward to cleaning up the gore as Pancho’s brains exploded outward. It made him think of when you step on one of those plastic ketchup packages from a fast food joint. After a short sigh, thinking of what a mess he’d made, beleaguered, he entered his house through the connecting door, took off his boots, walked to his bed, and fell immediately into a deep sleep. The next day, he awoke with neither joy nor dread but curiosity… or anticipation might be the better word. Did last night really happen? If it didn’t, the dream was surreal. He soon realized, when he saw the gruesome mess in his vehicle and in the garage, this was clearly not a dream.

James Riordan is driving through a Connecticut town in the midst of a horrendous winter storm. After hours of stressful traveling, he spots a run-down bar and despite grave misgivings, stops in for a drink. In a very ominous way, he learns that the four patrons currently in the tavern are regulars and that they all have one dark thing in common. He’ll also soon discover that not only the regulars share this bond, but the young dishwasher and the bartender do as well. While learning about this group of eccentric, sometimes likable, but extremely dangerous individuals, James, will learn how the mind can hide past sins and that the road to evil can range from a long twisting build up of rage - to one that is unprovoked and soon forgotten.

A first time author driven to tell a story that he had conjured up during a trip home during a snow storm. The book idea from beginning to end was immediate. It was completed a couple years later. He believes the readers will find the characters in this novel amusing, eccentric, and most of all, deadly.