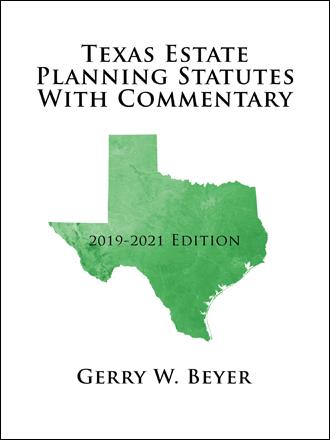 Statutes in Context Chapter 201, Subchapter A Early in the evolution of civilization, societies developed customs and laws to control the transmission of a person’s property after death. Our modern intestacy laws are traced originally to the Anglo-Saxons. The Norman Conquest of 1066 A.D. played a significant role in the development of these rules. William the Conqueror was irritated that English landowners refused to recognize his right to the English Crown after his victory. Accordingly, William took ownership of all land by force and instituted the Norman form of feudalism. Under this system, the Crown was the true owner of all real property with others holding the property in a hierarchical scheme under which lower-ranked holders owed various financial and service-oriented duties to higher-ranked holders. As a result, real property became the most essential element in the political, economic, and social structure of the Middle Ages. The Crown and its tough royal courts controlled the descent of real property. The basic features of descent included the following rules. (1) Male heirs inherited real property to the exclusion of female heirs unless no male heir existed. The reason underlying this discriminatory preference for male over female heirs was based on the feudal incidents of ownership. One of the primary duties of lower-ranked holders of property was to provide military service to higher-ranked holders. Under the then existing social climate, women were deemed unable to perform these services and thus were not able to inherit realty if a male heir existed. (2) If two or more males were equally related to the decedent, the oldest male would inherit all of the land to the total exclusion of the younger males. This is the rule of primogeniture. Primogeniture was applied because the Crown thought it was too impractical to divide the duty to provide military services as well as to subdivide the property. (3) If there were no male heirs and several female heirs, each female heir shared equally. Before the industrial revolution, personal property was of lesser importance. There were no machines or corporate securities about which to worry. Instead, most chattels were of relatively little value such as clothing, furniture, jewelry, and livestock. Thus, the Crown permitted the church and its courts to govern the distribution of personal property. The ecclesiastical courts based distribution on canon law which had its foundation in Roman law. In general, personal property was distributed equally among equally related heirs. There was no preference for male heirs and the ages of the heirs were irrelevant. After centuries of movement toward a unified system, the English Parliament passed the Administration of Estates Act in 1925 which abolished primogeniture and the preference for male heirs as well as providing uniform rules for all types of property. Most intestacy statutes in the United States make no distinction based on the age and sex of the heirs nor between the descent of real property and the distribution of personal property. However, Texas and a few other states retain this latter common law principle and provide different intestacy schemes for real and personal property under certain circumstances. The intestate distribution scheme in Texas is derived from §§ 201.001–201.002 (distribution of property of a single decedent and the separate property of a married decedent), § 201.003 (distribution of the community property of a married decedent), and § 201.101 (determination of the type of distribution). Below is a summary of these sections assuming that the decedent died on or after September 1, 1993. 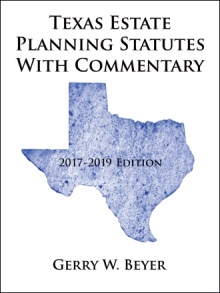 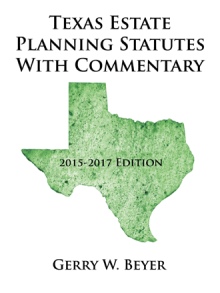 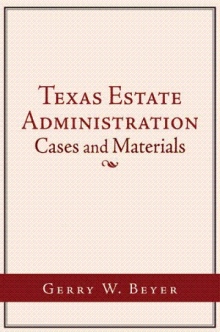 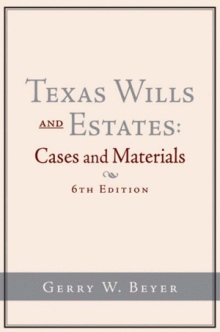 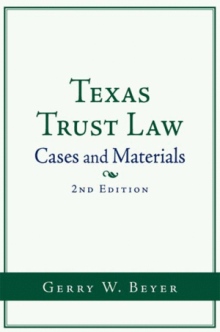 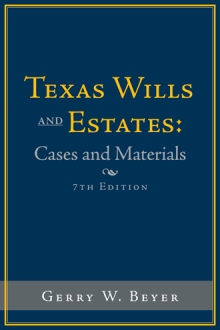 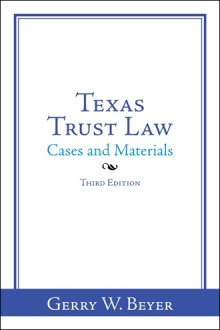 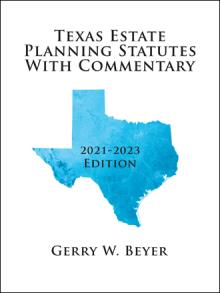 Texas Estate Planning Statutes with Commentary: 2019-2021 Edition is a compilation of Texas statutes that are significant to law school and paralegal courses related to estate planning, such as wills and estates, trusts, estate administration, probate, elder law, and guardianship. Changes made by the 2019 Texas Legislature are printed in red-lined format to make the revisions easy for the reader to locate. Many sections include carefully written commentary entitled Statutes in Context. These annotations provide background information, explanations, examples, and citations to key cases, which will assist the reader in identifying the significance of the statutes and how they operate.

Prof. Gerry W. Beyer joined the faculty of the Texas Tech University School of Law in 2005 as the first holder of the Governor Preston E. Smith Regents Professorship and has served as a professor at many law schools since leaving practice in 1981. He is the recipient of many outstanding and distinguished faculty awards including the Chancellor's Distinguished Teaching Award, the most prestigious University-wide honor. Texas Tech also named Prof. Beyer as an Outstanding Researcher in both 2013 and 2017. Prof. Beyer is an Academic Fellow and Regent of the American College of Trust and Estate Council and was inducted into the Association of Estate Planning Council’s Estate Planning Hall of Fame in 2015. He is a highly sought after lecturer and presents at dozens of continuing education programs each year for state and local bar associations, universities, and civic groups coast-to-coast. Prof. Beyer is the editor of the most popular estate planning blawg in the nation which was awarded ABA Blawg 100 Hall of Fame status in 2015. Prof. Beyer is the Editor-in-Chief of the Real Estate, Probate, and Trust Law Reporter of the State Bar of Texas, the editor of the Keeping Current—Probate column for the ABA's Probate & Property magazine, and is a member of the American Law Institute.