THE PLIGHT OF AFRICAN-AMERICAN MALES

WE CAN'T BE SILENT 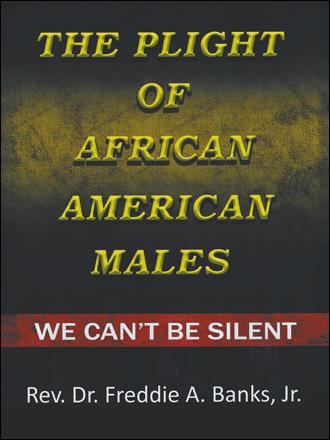 As a result of this and other life experiences I felt compelled to author this book with the intent of inspiring and sharing any gifts of wisdom to other African Americans who may have grown up with the same patterns of life that I experienced. It is our hope that the examples/experiences presented in this book which will able them to know that being African American does not prohibit one from being successful if one places the right ingredients in it. Therefore, in this book I turn my attention to the plight of the African American male and his transformation into manhood. You will discover that there is a way to overcome "this plight" and become all that they are capable to become. Now just look at what is happening in our society in the 21st century. We are witnessing not just the participation of multiply parties in this conspiratorial concoction of chaos and corruption, but entire systems are taking part in this ploy. The educational system is severely flawed, producing an alarming dropout rate and leading to an alarming African American male unemployment ability in an economy. Built upon having the competitive edge to those who are educated or have a skill to perform. This forces African American males to seek unlawful alternatives to make ends meet which may further enhance and fuel the cradle to prison, and through an unfair justice system, this new pipeline results into mass incarceration what is known as the new Jim Crow or lynching system of African American males. The African American males are exposed in increasing numbers to dangers imposed by those (Police Officers) who misuse the privilege of bearing firearms as opportunities to kill the very individuals they are commissioned to serve and protect. All one has to do is walk down memory lane at the recent killings of unarmed Blacks indicates that we should be fearful of whether we will be the next casualty of a traffic stop, broken taillight, or some law enforcement mistaken identity. Perhaps the most heart wrenching realization is our complicity as African Americans in this conspiracy. You see, failure to comply with societal norms and the alarming rate of crimes committed against even each other, causes us not to have clean hands. We can do this for our African American males if we help them transform in the way that we have described in this book. Many believe that male children are considered a prize in most societies. In ancient society, women and girls were considered to be property and thus were owned by men. Sick children and female babies were often carried outside the city and left to die. Please don't get me wrong, I am not saying that this is right or good, but it is a fact. Fathers often want boys and mothers are also guilty of the same desire. Male children are given a certain place, a special place in the hierarchy of our respect. Even in the training of children, this sense of a double standard is evident. Girls are taught to be chaste and pure, while boys are told to use protection and be cautious. We want male children to learn to be tough, competitive, smart, aggressive and prepared. We do not want them to be weak, shy, or bashful. There is an image of which they must aspire and which many parents try to reinforce. Yet, as we look at the boys of our society today, as we look at these youngsters on the doorstep of manhood, it is hard to conclude that they are the valuable assets that our culture has declared them to be. There are so many young men whose lives are tornadoes spinning widely out of control. There are too many young men caught in the grip of ghetto gunfights and community crime. Those assets, these pearls of tremendous price, have seemingly been devalued and depreciated. So, grave is this trend that a whole new type of manhood has grown up in our community; a whole new rite-of-passage program has been developed and implemented right under our noses. Being African American has never been, nor will be easy. Every time we take a step forward, we are pushed three steps backwards. For many Black men, being a man is not attainable. We must remember how we were enslaved, lynched, castrated, humiliated, emasculated and discriminated against as he has always faced an uphill climb. This raises the question of how has the Black make survived and, in many cases, prospered in a land that seeks to deny him everything that gives him pride? How could so many Black men be good fathers and husbands that they are, when there has been so much to diminish and discourage them. Maybe there is no clear answers to these questions, but this we do know, that the hearts of many Black men have shared an unyielding faith in God, which is the key of transforming boys to men. As they face challenges of each day, many Black males have come to know that when we are unable, God is able and when he showed up, he showed out. When we believe that there is no way, the Lord was on our side, made a way out of no way. When we found ourselves weak, God was strong and this is how the Black male survived. While the Black male individual struggle may differ, we are united in the struggle for humanity as we are transformed from boys to men and become empowered men, knowing that love is the social instinct which binds man to man together and makes them indispensable to one another, know this that whoever demands love, demands solidarity, and whoever sets the love of many first, sets fellowship at its highest point.