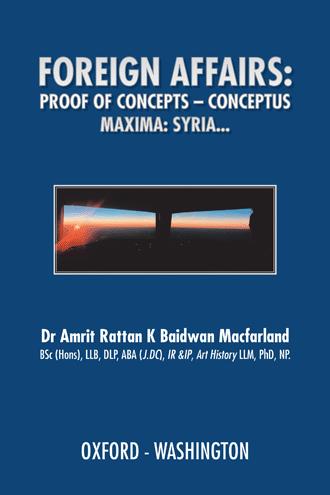 Dr Amrit Rattan K Baidwan- Macfarland presents her essays and research in foreign affairs and international relations; the causes behind the development of the Syrian civil war and its impact on the wider regions of the Middle East. How does the Syrian civil war conflict involve the thesis of the cold war paradigms, the balance of power, and containment, with Russia and the USA for the first time, since the global conflicts began, now engaged in Syria. The concepts of foreign affairs and IR have since been activated, are discussed as are major military events, peace initiatives conducted by Russia and the USA, and other regional, national concepts as well as prior conflicts, Iraq, Libya, Israel-Palestine, Arab Spring in Egypt; which expanded to become a violent civil battle in Syria and that has the potential to change the Middle east paradigm, and to reshape the Arabian Peninsula. By focusing on the global history of conflicts, this century, and the proxy cold wars in the Indo-pacific regions, between two global powers, she takes each unique topic and examines through this novel lens, the development of Syria’s war. The exploits of the Islamic state of Iraq, Syria, and that of the Islamic states of Libya (ISIL) and Nigeria (ISWAP), their role in the development and escalation of unrest, and devolution to a civil war and a larger conflict ultimately embroiling the entire Arab world, most key Western nations, and Indo-Pacific Asiatic nations. Multinational Oil companies, (MNE), operating in conflicts zones, such as the above, is examined, the stakeholder enablement principle re-examined, and amendments to current legislation suggested. She further explores the role of AI in conflict zones and NASA space research, as presented by Washington, and the United States legal systems. How will granting legal personhood to AI impact on the near future for the purposes of Intellectual property law and other areas, and explores the ideas of intelligence from models moved forward by eminent philosophers, and jurists of our times. What models in existence could grant AI an existential presence as an intellect and therefore as a Legal person. This raises questions of infringement, as AI evolve to becoming persons that create, invent and paint, and even at times, have killed. What happens when they evolve into a super intelligent entity, how then will the laws, get involved through the common law, the civil tradition, and equally the criminal laws? Patent law and copyright laws are addressed along with moral rights, as they impact evolving technologies and their engagement in conflict zones. She addresses the first concept of the Holy war, Jihad (2001- present of the Arabian peninsula) taken from the Sanskrit text Mahabharata and then delivers it conceptually as a dialogue between a Sanskrit Christos and his beloved disciple before the commencement of the Jihad. Selected paintings of a Commander and Captain are also presented in her final chapter. AUTHORHOUSE - ACADEMIC PRESS

Dr Amrit Rattan K Baidwan Macfarland – studied, Public law and administration, foreign affairs, international relations, diplomacy, Intellectual property laws, copyright, patents, trademarks, design rights, confidentiality agreements, international business and corporate law, Technology laws, artificial intelligence and theories, and applications, as part of Masters of Laws (LLM), as well as a undertaking a highly specialised course, in International relations, as adjunct to her Public law (LLB) degree. In her thesis in IP Laws, and her elective in International relations, she obtained a first with distinction, in her submitted thesis to the University of Aberdeen in Scotland. She gained deep insights in theoretical and pragmatic foreign policy, relations, and affairs from her academic studies and enjoyed her research in conflict studies and peace and security as part of the contemporary living history modules. Through these subjects the evolving character of global and supra national institutions could be gleaned, as well as the interpretation of civic societies and international diplomacy, exploration of juristic constitutionalism at national and international levels, peace, conflict, religion and Middle east politics in North and West Africa, and in the Arabian peninsula. Furthermore she studied and undertook advanced research (2012- Present) on the principles of American, Russian, Arabic, Indo- pacific and far eastern foreign policies including the foreign affairs policies and strategies in Syria and the wider region, impacted by Syrian politics. The impact of Syria on the balance of power and containment doctrines was the same as seen in wider Arabia and in the Indo Pacific during the cold war, with the USA and Russia taking opposite standpoints. The defence strategies, international law paradigms were dramatically changed through the civil war in Syria and altered the international relations, diplomacy and legal perspectives as a whole in the entire Middle East region. She attended many conferences, presentations, debates in key areas of foreign affairs and comparative legal theories practice and constitutionalism lectures, as it pertained to the current paradigms of international laws and foreign affairs. She with her team debated in various venues in universities far and wide in Scotland, and in England, and even as far as New Delhi in India. The institutions of defence, European council, courts of justice, in Brussels, strategic initiative, FCO, Washington schools of law and , institutes, diplomatic institutions, arbitration protocols and tactical diplomacy teams contributed much to the debate, of the unfolding crisis in Syria and the surrounding regions, since 2011 to present. She has since 2011 attended many diplomatic affairs forums, and has written many articles and books on Middle East conflicts and peace initiatives, as part of her contemporary living history series and projects spanning the years 2001 – present. Her writings cover all the conflicts, from Afghanistan, Libya, Iran, Syria, Ukraine, Saudi Arabia, Qatar, Yemen, Iraq, Kashmir, North Korea, Israel-Palestine, Egypt, Tunisia, West Africa, and Nigeria, which occurred under the US administrations of President Barack Obama and President Donald Trump (2012-present), as well as the Russian administration under President Putin. The official documents released by the Russian embassy and foreign Minister, Sergey Lavrov in Syria and from US embassy in Syria and Foreign Ministers, John Kerry, Phillip Hammond, Boris Johnson, Rex Tiller son, Michael Ratney, Michael Richard Pompeo, as well as United Nations Secretary General Ban Ki Moon and Antonio Guterres; were painstakingly collected to make sense of the reasons and key causes for the civil war in Syria which spanned the years of 2011 to present, and with no conclusion in sight in the near future.