“I HAVE KEPT THE FAITH” 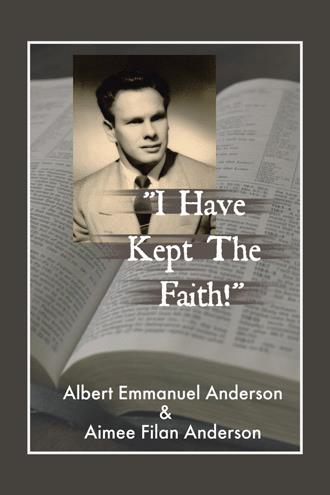 As the oldest of the six children of Albert E and Aimee D Anderson, I have always seemed to carry the torch for our family legacy. I have “great” and “awesome” memories of the many sermons my dad preached throughout his years of ministry in the pulpit, as well as the “many” sermons that were preached to us kids before and during our times of discipline after doing something we were told not to do! Both were invaluable in my upbringing; and I will always be grateful for that.

I know beyond a shadow of a doubt that this book will be an invaluable tool for the “new” Christian just beginning his journey, the “seasoned” Christian wanting a deeper walk with the Lord, or the person that is simply “searching” for something that is missing in their lives! Jesus wants to be sought after by all humanity; and it is only after finding “HIM” the giver of life, that true happiness lies. May you be as blessed reading this book as I was living it day in and day out!

Aimee Filan Anderson, daughter of Olaus and Minnie Filan, was born near Hay, Washington, in Whitman County and grew up on a wheat ranch. After high school graduation from Wa Hi in Walla Walla, Washington, she attended Northwest College in Kirkland, Washington.

Albert Emmanuel Anderson, son of Albert and Hazel Anderson, was born near Crocker, South Dakota, in Clark County and graduated from Clark High School. In 1952, he graduated with a B.A. degree in Bible from Central Bible College in Springfield, Missouri. After graduation, he began evangelistic ministry.

Albert married Aimee Filan, April 9, 1954, in Walla Walla, Washington. While on their honeymoon, he was ordained as an Assemblies of God (A/G) minister in his home church at Clark, South Dakota.

With his wife, Aimee, they traveled together for almost three years, holding evangelistic meetings until taking their first church in February 1957 – shortly after their first child Deborah Dawn was born.

Sectional District offices Albert has held: include Sunday School Representative, Youth Director, Camp Speaker, and Presbyter. On June 19, 1994, he resigned as pastor of the Ellensburg First Assembly of God, after a ten-year pastorate there.