by Marianne Worth Rudd 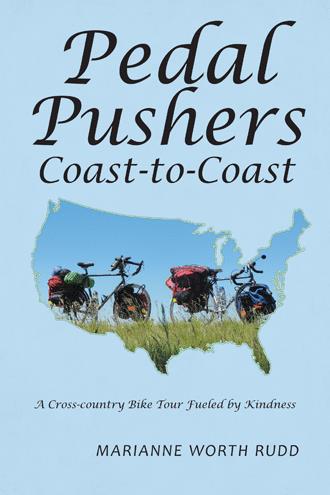 They expected snow, lightning, heat, and wind while bicycling cross country. That happened. They did not expect a car collision, a broken arm, or Hurricane Sandy. That happened, too.

For thirty-two years, Marianne Worth Rudd dreamed about cycling cross country, almost as long as she’s known her husband, Terry. She thought the bike trip was about getting to the Atlantic. She discovered she was mistaken about both.

Pedal Pushers Coast-to-Coast is her story of their 2012 cycling quest from the Pacific to the Atlantic, chronicling the challenges, joys, and surprises of their 4500-mile, twelve-week bicycle journey. Personal quirks became quirkier. Pain and grief unexpectedly seized the trip mid-way with a car collision and broken arm for Terry, but three months later, their quest resumed- on a snowy October day in northern Minnesota.

From once coast to another, Marianne (Mari) and Terry experienced not only the changing terrain and state borders, but an elation far more gratifying than just reaching destinations—they discovered the curiosity and kindness of strangers, and the lasting impact. From simple gifts of root beer and oranges on a hot day, to shelter from a lightning storm and random invitations countrywide for meals and lodging, strangers offered unexpected generosity and care throughout their travels.

Pedal Pushers Coast-to-Coast chronicles a transcontinental cycling adventure marked by challenge, resilience, and hope, and illustrates the outpouring of kindness and generosity from strangers across the continent.

Marianne Worth Rudd is a veteran of self-supported bike touring in North America, Europe, and New Zealand. She’s completed three cross-country U.S. bike trips—two with her husband, and one as solo cyclist. With a passion for language and youth camps, she often works at camps in the United States or Switzerland, either teaching language or working as a camp nurse. She received her Bachelor of Science in Nursing from Pacific Lutheran University, and her Master’s degree in International Education with a focus of Teaching English as a Second Language from Endicott College. When not on her bicycle or at camp, Marianne can frequently be found in Portland, Oregon, where she lives with her husband. She can be contacted at www.thepedalpushers.net.