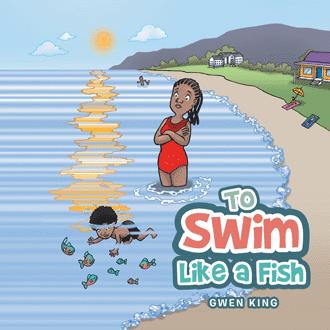 The beach is his most favorite place in the world. He loves to feel the waves splashing on his feet. He likes to see the many fishes swimming next to him. They even brush his legs as they swim by. The water so clear he can see right down to the bottom. He tried many times to catch a fish, but it slips through his fingers. He would like to swim like a fish. But he must figure it out how. Now that’s a puzzle. When he is swimming in the sea his Mom always tells him to keep his above water. But how come the fishes do not drown when their heads are always under water. He wonders and wonder. If he can swim like a fish, then his Mom will not keep reminding him to keep his head above water. Thinking very hard about the puzzle he told himself that if he studies the fishes, he may be able to discover their secret. He watched, and he watched as the fishes swim. He notices that they wiggle their tails and flutter those things on the side that look like wings. He remembers when he asked his Dad what they were called, and he was told they are fins. Now he must figure out why the fish keep their heads under water and do not drown. He must figure it out.

Gwen was born in the village of Old Road on the island of St. Kitts in the Caribbean. Her interest in story telling was ignited by her own childhood experience. Every night before bedtime her grandmother told stories. Those nighttime stories are one of her fondest childhood memories. As an adult Gwen continued the practice of storytelling with her son. Gwen feels that every child should take that mythical journey of hearing a story being told before bedtime. In her writing she captures the nuance of her Caribbean upbringing and its culture— life in a village and the questioning attitude of a young boy growing up on an island. Gwen is an avid reader who loves to travel and takes great pleasure in gardening.