Where Imagination and Reality Are Woven into the Fabric of Life 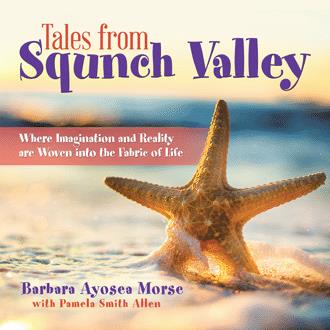 Shell Poem If you could have a shell of your own Where you could hide Deep inside When you are scared, Or sad, or mad, Or just when you feel like dreaming alone, What would it be like? How big, how small? How short, how tall? Would it be bright and sunny Or shady and funny Or dark and still? Would it feel soft and smooth Or scratchy Or lumpy and bumpy? Would it feel hot or cold Or comfortably enfold? What color would it be? One or many, Or maybe not any? What would it smell like? Something nice, like cinnamon and spice? A garden of flowers, The ocean, Or rain? Fresh mountain air, a forest, A country lane? A favorite room, someone's perfume? Your old teddy bear, Or cookies baking? What sounds would there be? Singing or humming? Bells ringing, Drums drumming? Imagine that shell, Whether dark or light. Squnch into that shell. Be a Squnch, curled up tight. Wherever you are, whether near or far, All is well. You’re safe in your shell. Rocking and floating… Rocking and floating… Rocking and floating… Adrift on the lavender sea of tranquility. The Arrival in Squnch Valley Somewhere, not very far from here, there is a valley. The valley is surrounded on three sides by purple velvet hills, with a lazy lavender sea on the fourth side. The valley is covered with soft, green grass and flavorful flowers that are very good to eat. There are magic rocks and poet trees and a tiny, shiny puddle that reflects all it sees. In a corner of the valley there is a whispering waterfall that knows all the secrets in the world. In the purple velvet hills, there lives a gentle Wind. Every day the Wind blows down from the purple velvet hills and dances in the valley. She rolls in the soft green grass, nibbles the flavorful flowers, and swims in the lavender sea. The Wind plays with the magic rocks and picks the poems from the poet trees. She listens to the secrets from the whispering waterfall. And every evening, she looks at herself in the tiny, shiny puddle that reflects all it sees. But all she sees are the ripples she makes. One day the Wind grows tired of being so nice and gentle. The Wind is angry because she has no one to play with in her beautiful valley. So, the Wind blows itself into a gigantic storm. She knocks over the trees and throws the magic rocks. The rocks crush the soft grass. The Wind boils the water of the sea into tremendous waves, which crash across the valley to the purple velvet hills. The Wind tears up the flavorful flowers and blows them away. The waterfall weeps. When the Wind stops and looks around and sees what she’s done, she feels very sad. The valley is a mess. The Wind straightens the trees and sweeps the water back into the sea. The Wind pushes the rocks back into place. On the crushed grass are shells which the sea has left. And in the shells are the Squnches, curled up all tight and afraid. They are afraid because they’ve never been out of their shells and they miss the lullaby of the sea. The Wind calls to them because she knows here are the playmates she has wanted in the valley. But the Squnches are too scared to move. They stay very still in their shells, and close their eyes and ears so they cannot hear the Wind. But the Wind still wants to play, so she begins to tickle the Squnches in their shells and the Squnches begin to wiggle and giggle in their shells. The more the Wind tickles, the more they wiggle and giggle. And the more they wiggle and giggle, the more their shells shake. Suddenly, from each shell, out pops a head! The eyes on the heads move all around. The ears on the heads hear every sound. The noses on the heads begin to twitch. They smell the flavorful flowers. The Squnches are hungry! So, from each shell, out pops a hand! And another hand! The fingers on the hands explore the air everywhere. Sometimes they come together and then spring apart. They explore the shells and they touch the grass. Then, each and its own way, the Squnches slowly move out of their shells. Some roll. Some crawl. Some creep very low. And some are so scared you can barely see them moving at all. The Squnches creep and crawl in the soft grass. They roll in the grass. They discover the flavorful flowers in the grass, and eat and eat until they are full. And then they stop and look up and see the poet trees. Oh, they want to pick the pretty poems. Slowly, they move to stand on their feet for the very first time. Then they reach up and up, stretching and stretching toward the poems. They jump, trying to reach the poems. They can’t quite touch them, but they can reach the branches. They grasp a branch and start to swing, forward and backward, and side to side, gently swaying, feeling the Wind moving all about them as they swing and sway in the poet trees. Letting go, they land—PLOP—in the lavender sea, which tosses them this way and that. They are surprised, but soon begin to swim. Sometimes they swim forward on their stomachs, and sometimes they swim on their backs, or just lie very still and float. Tired at last, they crawl out of the sea to rest on the sand. They lie down on the sand. They feel the warm sand under their feet and legs and hands and arms and backs, and they feel the warm sun on their faces and all around them. They hear the gentle Wind singing a lullaby to lull them to sleep as they sink deep into the sun-warm sand. 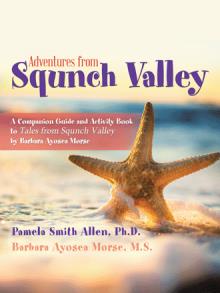 This book blends fantasy and reality to tell the story of childlike characters called Squnches. They emerge from their shells in a safe, wonderful valley where they grow and develop under the guidance of the Wind and other wise, colorful characters. Eventually, they evolve into loving, compassionate people, ready to leave the valley in bubbles and share their gifts and talents with the world. Children will identify with the Squnches as they face similar developmental challenges in their lives. The eighteen stories are meant to be read aloud to young children up to seven or eight, who may also enjoy acting them out. Children from nine to twelve and older can read the book for themselves but may also enjoy listening to the stories presented as guided imagery exercises that inspire creative expression. Teachers, parents, and therapists will find the stories delightful and useful as teaching tools for all ages.