More Than One Storm Coming

Women Will Decide Elections from Now On—2020 Guide 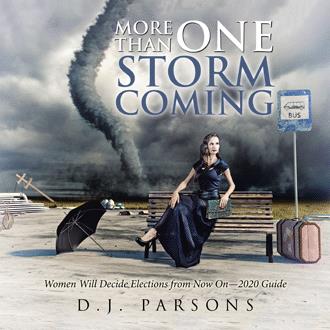 My grandmother born in 1903 must have been right in the thick of it. I regret I was paying more attention to Disco than taking the opportunity to ask her about those times. Born in 1925 now in her nineties my mother didn’t speak about the Wall Street Stock Market Crash of October 24, 1929 or the Great Depression that loomed over her divorced single mother with two small children. It was left to a relatively small number of women to sacrifice and fight to secure all women the right to vote; representing and including those who vehemently fought against them. It appears one hundred years later it will be the same. Only some of us will do the heavy lifting to keep our daughters out of Russian or any other brothels. You will be asked in my closing argument on which side of the ledger your name will go. • What the woman’s story is about – Part One • What are our biggest obstacles – Part Two and Part Three • What is the worst and best case outcomes – Part Four and Conclusion Readers and movie-goers alike would be surprised to know a formula is used in all scripts. More Than One Storm Coming is non-fiction as real as it gets.

The day of the gentleman is over. Good manners are of the past. Brutality and barroom talk is in. It’s OK to grope. It’s OK to lie. I am thankful for the husband I have. Are there only a few decent ones? What about yours? Does your husband fight for your rights? Sons? Take an informed look at policies being made for women and children today. We’re not going to let men make the rules for women anymore. We’re going to make our own rules and laws. Read about the following:   ● Women are getting America’s groove back.   ● Some men are saying, “I’m in.”   ● Birthing pains are getting harsher and closer together. What will come forth?   ● What are the stakes?   ● Job opportunities for girls in the twenty-first century. If you are a quiet revolutionary and don’t know what to do, this book is for you.

One of America’s concerned citizens; D.J. Parsons has worked for decades to inform ordinary women and girls their future and basic freedoms are being threatened by men again. She argues because men have shown for millennium money and power has proven to be what is ultimately valued most over wives and children, the two trains crashing is not geographic or economic, but biologic. Parsons foreshadows several outcomes for the female of the species immediate future in this 2020 Election Guide. Parsons wrote about ascribing responsibility of Abortion to men in 2009, a Christian fiction mystery introducing retired church secretary sleuth, Mae Lancaster in 2012, then returned to Non Fiction in 2015 warning us of the Failed Patriarchal Systems.