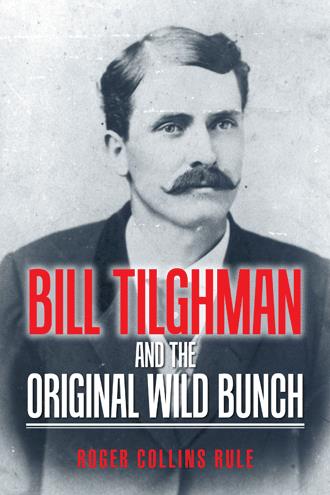 Bill Tilghman, as a Wild West lawman, was the most underrated in history but not by his peers. Bat Masterson said, “Of all of us, he was the best.” Bat included Wyatt Earp, himself, and other famous lawmen. From the long-lasting TV show, Gunsmoke, Matt Dillon was the personification of Tilghman, the Dodge City marshal. After appointed US marshal, he was mainly responsible for the demise of the notorious original Wild Bunch (not the hole-in-the-wall gang later): Bill Doolin, Billy Dalton, Bill Raidler, Red Buck, Arkansas Tom, Tulsa Jack, Dick West, Dynamite Dick, Charley Peirce, Bitter Creek Newcomb, Little Britches, and Cattle Annie. Tilghman was one of few men that lived during the time that spanned hunting buffalo to stopping narcotics flown in from Mexico. He became the chief of police of Oklahoma City and was elected as one of the first senators of the new state. Happily married to his second wife, Zoe, he was prosperous, owned a Kentucky Derby winner, founded a movie film company, and had a starring role. Even at seventy, he continued his law enforcement, cleaned up the oil boom town of Cromwell, and was killed in action. He was the first lawman to have his casket lie in state in the capitol rotunda with an honor guard. This novel contains actual dates and events.

Although Roger Rule wrote his first book thirty years ago, and six others published since, Bill Tilghman and the Original Wild Bunch is only his second novel. According to literary critic Chris Wolcott, Mr. Rule is “a very talented writer and [has] a very distinctive style of writing.” Rule is a graduate of Mizzou and a published author of authoritative books recognized as the reference source in their respective fields. These include: The Rifleman’s Rifle (Alliance Books), Twentieth Century Winchester (Alliance Books), The Franchise Redbook (First and Second Printing, PSI Research), No Money Down Financing for Franchising (Oasis Press) and The Rule Book of Business Plans (Oasis Press). After serving as an infantry airborne officer in the U.S. Army, he started a real estate development business in California where he met and married, Eileen, a California real estate broker. Mr. Rule is past president of seven companies and is acknowledged in Who’s Who in California, Personalities of America, Who’s Who in Finance and Industry in America, and International Businessmen’s Who’s Who. He built the first assisted living facility in Hawaii and after selling his interest, retired and resumed his writing interests writing screenplays, business books, professional business plans for world-renown companies; and most recently, the novels Sarah and Bill Tilghman and the Original Wild Bunch.