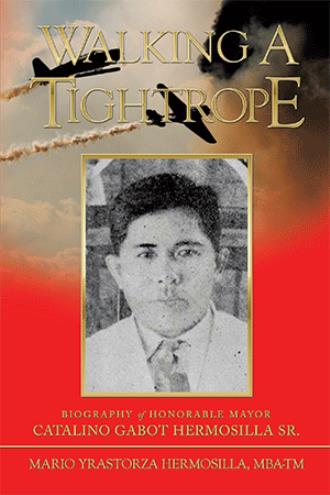 This book contains the biography of Mayor Catalino Gabot Hermosilla, Sr., a Filipino politician, who was the mayor of Ormoc, Leyte, Philippines during World War II from 1941 to 1943 during the occupation of Ormoc by the Imperial Japanese military. His term of office was characterized by danger in the hands of the occupying military force where he demonstrated uncommon valor with the skillful and diplomatic handling of the affairs of the government under the yoke of the oppressors while cuddling with his Filipino brother-in-arms who were fighting the Japanese as guerilla warriors in the town and around the hills of Ormoc while at the same time, “played ball with the enemy” in order to save lives and protect the population under the detriment of his own safety…a fete that he later called “walking on a tight rope.” It also contain numerous historical accounts and records of Ormoc that is a “must read” to every fellow Ormocanon. Mario Yrastorza Hermosilla, MBA-TM Author

Mario Yrastorza Hermosilla Mario Angelo Yrastorza Hermosilla, MBA-TM, is the grandson of Honorable Mayor Catalino Gabot Hermosilla and Maxima Teberia Militante. He was born in Ormoc City, Leyte, Philippines, on May 31, 1953, where he was mainly raised and educated. Mario is the fourth child of Romeo Militante Hermosilla and Cecilia Torres Yrastorza. He attended school at St. Peter’s College (formerly St. Peter’s Academy) from kindergarten through high school graduation in 1969. Mario subsequently pursued technical training at the former Cebu School of Arts and Trades—now known as the Cebu Technological University and formerly known as Cebu State College of Science and Technology—from which he graduated in 1971 with an associate’s degree in automotive mechanics. He eventually joined his father’s business and became a management apprentice under his father’s tutelage. While in training, he continued his college studies close to home at St. Peter’s College, majoring in business management (commerce). While in college, he indulged himself with multiple extracurricular activities. He was elected president of the Commerce student council, served as associate editor of the school organ (The Key), was a member of the dance troupe and the school choir, and was the captain in the Army Reserve Officer Training Corps (ROTC). He was also a delegate of multiple seminars for the youth. In 1971, while seeking career opportunities, Mario responded to military recruitment ads and enlisted in the US Navy at the former Subic Bay Naval Station in Olongapo, Zambales, Philippines. He took the oath in July 1973 and underwent recruit training at the Naval Recruit Training Center (boot camp) in San Diego, California. He later underwent technical training for the Aviation Structural Mechanical-Hydraulic “A” school at the Naval Air Technical Training Center (NATTC) at the Memphis Naval Air Station (NAS) in Millington, Tennessee. He also volunteered and became qualified as a naval aircrewman and was assigned to the Fleet Logistics Support Squadron-30 based in the former naval air station in Alameda, California, where he performed duties as a flight attendant and cargo loadmaster of the C-9B Skytrain medium-range, fixed-wing cargo transport aircraft, logging more than one thousand flight hours of operational and training flights. Subsequent duty stations included NAS Barbers Point, Hawaii; NAS North Island, San Diego, California; Naval Air Facility (NAF) Atsugi, Ayase Shi, Kanagawa Ken, Japan (about forty-five miles southwest of Tokyo); and NAS North Island, San Diego, where he finally retired in 1997. During his active naval service, he served in the following operational navy aircraft squadrons: VR-30, VC-1, HS-2, HC-3, HS-6, HS-12, VAW-115, and HS-10. Additionally, he made several major deployments onboard the aircraft carriers CV-61 (USS Ranger, 1982), CV-63 (USS Kitty Hawk, 1984), CVN-65 (USS Enterprise, 1986 and 1989) and CV-62 (USS Independence, several cruises from 1993 to 1996). Moreover, he was a qualified CNET Navy Instructor (NEC 9502) and Master Training Specialist (MTS) (NEC 9506), with Naval Air Maintenance Training Detachments (NAMTRADET) in North Island as a navy instructor teaching SH-3 helicopter airframes and hydraulics systems maintenance and as a Pilot Familiarization Course Instructor. After serving honorably for twenty-four years, Mario retired from US naval service with the rank of Chief Petty Officer (E-7) in 1997, and he then pursued a career as a logistics engineer, logistics analyst, technical writer, and training curriculum developer for several defense-contracting companies in southern California, in support of military weapons programs for SPAWAR, US Navy, US Army, US Air Force, US Marine Corps, and Military Sealift Command for the T-AKE, MLP, ESB, and T-AO New Ship Construction Programs. Mario holds a bachelor of science degree in aviation management from Southern Illinois University at Carbondale, Illinois (1991), and a master in business administration-technology management (MBA-TM) degree from the University of Phoenix, San Diego, California campus (2005). He is married to Virginia Pajaron Conopio of Ormoc City, Leyte, Philippines, and they currently reside in San Diego, California. They have two wonderful children: Marvin Conopio Hermosilla and Melissa Conopio Hermosilla. They are also the proud grandparents of Makaeil “Mackie Boy” Hermosilla, Mason Emmanuel, and Miles Evan, children of his son Marvin and gorgeous wife, Maria Edlyn Añonuevo Lalas of Pagsanjan, Laguna, Philippines. Besides writing academic papers, Mario also served as an article contributor and associate editor of the St. Patrick’s College school organ called The Key in 1972–1973. He has also written articles for US Navy magazines. The author spends his spare time with his community of expatriates from Ormoc with a registered nonprofit organization called Ormocanon Circle, USA (OCUSA), of which he is the current president and has served as president for two previous terms (2009–2011 and 2011–2013). The organization made significant contributions toward disaster relief in Ormoc, particularly during calamities like the Typhoon Haiyan (Yolanda) disaster and the Ormoc earthquake disaster of 2017. Other recipients of OCUSA’s much-needed financial assistance are the children of Operation Taghoy of Uplift Internationale (UI), which provides free operations to correct cleft lip in the Philippines. Also, the Hayag Foundation provides shelter to abandoned children in Ormoc. OCUSA also provides financial donations in support of Ormocanon International Inc. projects such as the renovation of the Ormoc District Hospital and the Ormoc Catholic Parish Church children’s playground. The author is also a member of the Free and Accepted Freemasons of California and the Scottish Rite Freemasonry as a 32nd Degree Freemason, San Diego Valley, Orient of California. Asked what his most rewarding experience was in his life, he simply shared the following quotation from John F. Kennedy, thirty-fifth-president of the United States: I can imagine no more rewarding a career. And any man who may be asked in this century what he did to make his life worthwhile, I think can respond with a good deal of pride and satisfaction: “I served in the United States Navy.”