‎ Greatest Tips about Pool You Need to Know 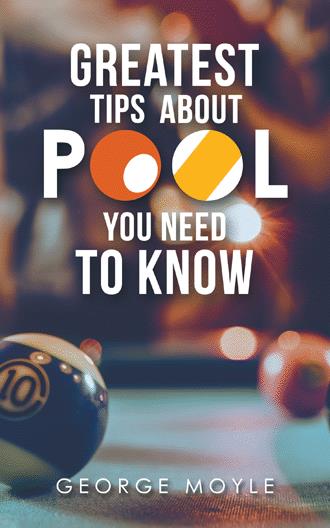 Greatest Tips about Pool You Need to Know makes various shots using English easy for beginners, but it leans closer to those players who want to excel in the game of pool as semipros. It details a system that will show you every angle on the table. Also, it makes massé shots simple and contains diagrams of kick shots. In addition, it contains the best information on the quarter system for those who have a hard time with angles.

George Moyle is seventy years old and still playing tournaments locally. I have also played in a nine-ball tournament in Lincoln City, Oregon, where there were two hundred players in my bracket. I was one match from the finals when I was beaten. I still made some money and had a good time. I have yet to be back to Lincoln City because of health problems, but those problems are all behind me now. Since then, I have played local tournaments. I have won every tournament I have entered within a fifty-mile radius of my home. I grew up in a small town where there wasn’t really much to do, so my mom got me into baseball at a young age. That was my game at the time. Little did I know that I also had the desire to play pool. Little League was my passion then, and I was good. Then came basketball, football, and other sports, but hardball was the sport at which I excelled. Then one day after church, everybody got together at a friend’s house for a potluck lunch. Under the homeowner’s three-car carport was a pool table. I was fascinated. At that time, I was twelve years old, and I asked if I could play. One of the guys said sure and that I could be on his team. This was my first encounter with a sport that I knew nothing about, and it was so much fun. Just hitting those balls around was thrilling. Every time we had potluck at the same house, guess what I wanted to do? Play pool. It got to the point that pool was addictive. I wanted to play more and more. So I asked the homeowner, whose name was Mary, if I could come and play once in a while. She said, “As long as you put things back where they go.” She had no problem with my playing pool, even when they weren’t home. So when I wasn’t playing baseball, I was playing pool. When I got into my teens, I started going to the local pool hall where I would meet a few friends, and I started learning more about the game. But I had a lot of questions. What would happen if I hit the cue ball like this? That was something I had never tried before. The cue ball didn’t even come close to the object ball that I was trying to pocket. I missed the pocket by a mile. This started me thinking: What just happened? So I tried the same thing again, but there was different action on the cue ball this time. Talk about trying to use English. I was lost from the get-go. But later in my teens, I starting learning more and more about English and some of what English can do. I asked for help from some of the better players, but they either didn’t know how or didn’t want to teach anyone. After spending thousands of hours on the pool table, I taught myself about English and why it is so important to the game. Without English, you can get yourself in trouble. English will keep you out of trouble, but English will also get you into trouble. English will get you back in line also. It’s a wonderful game. Be patient with yourself, but have some fun. I hope this book has answered some of the questions that you have. I hope to see you out there. Practice, practice practice! Never give up on yourself.