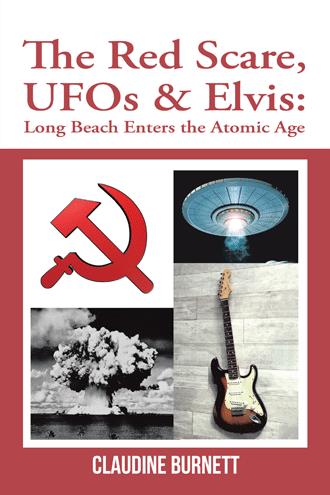 Throughout America UFO clubs were formed to study the unexplained phenomena. Some were serious researchers, others a bit nutty. In Long Beach, two groups were founded by Long Beach UFO enthusiasts in the 1950s – the UFO Research Society and the Long Beach Interplanetary Research Group to discuss the phenomena. The UFO Research Society was led by Reverend Carl Anderson, who claimed to have been contacted by beings from outer space. The Interplanetary Research Group wasn’t sure about Anderson and his claims, and they wanted to distance themselves from his preconceived notions about UFOs – they considered themselves open-minded and were anxious to hear all points of view.

One of the Interplanetary Research Group’s first speakers was Truman Bethurum, a former Long Beach resident, who addressed a skeptical audience in September 1954. He told how space men led him into their 300-foot flying saucer not just once, but eleven times! The crew appeared human, and was headed by a female captain, Aura Rhanes. All spoke colloquial English, Bethurum claimed, and came from the planet Clarion on the other side of our moon, which could not be seen from earth. Bethurum revealed they took him on trips across country and were here to end war without killing anyone. Bethurum, the author of Aboard a Flying Saucer, revealed that President Eisenhower had also talked with one of these space men.

Bethurum apologized for lack of photographic evidence, saying he had made photographs of the disc on two occasions, but all he got were reflections of metal. He did, however, show an artist’s conception of the 300-foot disc he said came from Clarion, the mysterious planet beyond the moon. Bethurum did have some reassuring news. He told the audience of 250 that he believed there would never be an atomic war “because people from outer space will see to that.” He went on to say the aliens had the power to nullify the bombs and would do so if it became necessary. Mankind would never gain the secrets of flying saucer power, Bethurum added, until humankind lost the desire to fight each other. Bethurum achieved a bit of notoriety after his story came out. He even started a religious commune near Prescott, Arizona, after the space aliens told him to do so.

Another speaker was Calvin C. Girvin who addressed the UFO Research Society in September 1956.

Girvin had an interesting story to tell, claiming to have spotted about 75 flying saucers in the past eight years. He said his first encounter was in November 1954 when he was stationed at Hickham Field, Hawaii. He was just about to go to bed when he saw a blue-white light streaking through the night sky, leaving a trail of red sparks. Figuring it was a just a jet the sergeant fell asleep. What happened then could have been a dream, he admitted, but it was like no dream he had ever had. He felt himself leave the house and over the yard, about three feet above the ground, was a ball shaped object approximately 35 feet in diameter. Its pearl-like cover glowed blue. A voice told him to enter the craft; after he did so he was whisked to another bigger violet colored space ship.

Taken to a UFO conference room, he saw 30 or 40 earth looking creatures dressed in earth style clothing; they identified themselves as being from outer space. They chatted amiably for about 45 minutes about Girvin’s future before he was transported back to his room at Hickham Field. When he woke up the next morning he was already dressed. Not only that – a circle 35 feet in diameter was burned into the lawn.

Girvin later described his encounters in a book The Night Has a Thousand Saucers published in 1958. It differed greatly from what he told the UFO Research Society in 1956.

In the book Girvin said he became interested in flying saucers after reading about UFO sightings in 1947. He soon began to have dreams, and joined the Air Force because he was told to do so by his Venusian friends, Cryxtan and Ashtar, to act as their spy. They wanted him to use every opportunity to inspect any files, reports, photographs or other evidence the Air Force held on flying saucers. At first he only remembered his encounters through dreams, but on September 15, 1952, while driving to Washington, D.C., he saw a Venusian saucer land and got to ride up to the alien mother ship which was orbiting the earth. He did what the aliens asked him and joined the Air Force. He was delighted when he was assigned to the Pentagon, even if it was only in food services, and used every opportunity to strike up conversations about saucers with top military officials. After a few months, Pentagon officials, tired of his incessant banter about UFOs, transferred him to Hawaii.

The baby boomer generation (1946–1964) grew up in a time of dramatic social change. Their experiences in the Cold War were very different from those of their parents. While adults perceived communism as a threat to the American way of life—to their health and well-being and those of their families—their children learned to fear the loss of a future they could grow into and inhabit. These kids of the atomic age wondered if they might be the last children on earth. They were raised on civil defense films, tales of nuclear annihilation, and a world taken over by communism. America had entered the atomic age. Flying saucers were big news, communism appeared rampant, a war in Korea erupted, teens turned to murderers, and there was fear the world might end. It was also a time of transition. Rock ’n’ roll entered the scene, space flight became a reality, and the public learned not to blindly accept what the government told them, especially when it came to atomic radiation and waste.

Claudine Burnett has written several books and articles on Southern California history for which she has received numerous awards. Her credentials include a B.A. in history from the University of California, Irvine; A Master’s in information science from the University of California, Los Angeles; and a Master’s in public administration from California State University, Long Beach. Several of Ms. Burnett’s books have been used in the production of PBS and CSPAN documentaries. She has also appeared on television and spoken on radio. Named one of the city of Long Beach’s most influential people in the cultural arts by the Long Beach Business Journal, she has also been described by the Long Beach Press-Telegram as “one of this town’s finest historians.” Ms. Burnett’s latest book is sure to live up to her reputation as “the expert on all things Long Beach.”