The Unholy Ghost of Hitler in Pentagon 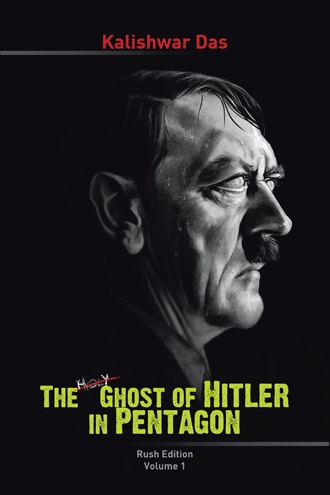 "Hello, can we talk? I’m sorry, I called you Hitler but you know what, -you really look like Hitler! Don’t get offended. I’m sorry again! But aks anybody, they will tell you the same."’ I kept trying to turn him back to talk. He suddenly turned back but replied rudely. “ "Ugh! I’m not Hitler owl!"” He stopped walking, and shouted on my face and moved ahead again. I saw him closely; he was only Hitler but none for sure. “"..I just look like him because I killed him while I was in him so got caught in his damn getup. I’m leaving Pentagon for some reason. It’s urgent! Dhamma challenging me to legalize Caliphate to enjoy peace with ISIL otherwise face them inside the America. I’ll never let it happen. I built Caliphate, and preserved them for urgent turnouts on Dhamma but he sneaked on them to incite against me instead. Islam has no divinity and it cannot claim the rule of Dhamma in its name even so how Dhamma can control them? Only I’m supposed to control them because they are my creation. If Dhamma doesn’t leave and keeps inciting them I’ll even nuke them. Do not stop me for him!" ***** "Republicans will hate to do this but even then I need someone like a businessman President among republicans who will suddenly stop accepting refugees and will take business as strategy to settle American problems seriously."” He started again telling me to continue the topic he wanted me to tell but suddenly in a different mood. I started hearing a weird sound from some corner and he smiled on it. He took the pose to dance, smiled cunningly and started moving his toes on bits scherzo. "See they are composing now!"” I didn’t know whom he was pointing to. I was focused to learn which tone he was dancing at. Lines were well versed and tuned to match pronunciation making it melodious. I can’t remember everything but.. …” 'It ain't no mystery, ..if it's politics or history; the thing you gotta to know izz ..everything iz showbizz!!' "Sso sweet swo sweet."” He cried on lines and started dancing fast. I put my jaws on my punch and started thinking like confused again; ..So the German dictator knew how to dance too and he claims he is not the ghost of Hitler hiding here in Pentagon. He is a liar, no doubt about that now. He suddenly stopped like he again caught me in my feelings. Music turned like muted with his anger, --quite for a moment. ” ***** 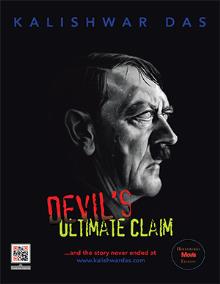 You're reading this back flip cover page assuming you'll get a quick answer to your curiosity '..why this book is in the name of Hitler with his disappointed caricature and with the Pentagon named with?' Reason to all this rest in a hidden sarcasm to remind, the greatness of America, particularly to those who for some reason has stopped loving it like their own homeland. A great nation indeed, which is getting ruined by its own people and by the undeserving new and motivated people from overseas. Solutions of all these, were never told before in this kind of fascinating sarcasm, -all to conclude wars and to stop getting terrified to promote love, peace and prosperity. Knowledge is the source of all solutions. Honesty is its path to stream with and Truth is the power to let it retain. Denouncing these founding principles will simply mean you agree to denounce your good future, -the coming generations. No matter where you're, who you are or which kind of topic you are dealing with, this rule applies to all or any of them without exception. Check it out in the book!

Kalishwar Das (47) is a Business Analyst in a men’s apparel business in South Carolina. He is also a modern age philosopher and fiction writer on religion and international politics. His devout Hindu ethics kept him active in experiencing this changing world differently, which he kept composing since long. He finds a clear conflict between Godly and Devilish power in the human civilization since beginning, which he proved in the book, as the natural steps of evolution. He believes, the History, the world knows yet, is the explanation of one side of past, which creates confusions in mankind to rattle on unending conflicts because other side of the past is never exposed so the understanding of problem never get completed. As a solution to this, he suggests: strong and honest steps to awake entire world to learn how to expose that dark side which kept them confused yet to fight forever. Understanding the other side of the history paves the way to foresee most of the major upcoming events also and mankind must get this urgent expertise to avert further mistakes, writer suggests. Kalishwar Das has three books ready for publication now. This is his first volume of Book-I out of four volumes. His second book is the answer to the Ghost of Hitler of the first book, which is in the format of divine revelation and third book is about his real life experience on romantic encountering in his teenage. To publish the GhostTrack to let readers learn foreseeing upcoming major world events, which he claims that only he knows about it currently, is under trial on web. His web magazine: www.ghpmagazine.com, which is currently merged with his personal website www.kalishwardas.com is trying hard to train people to know this weird GhostTrack to foresee upcoming major world events. This site will turn fully functional after June 2016.