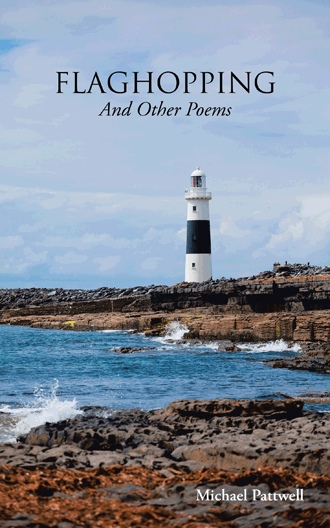 This is the title poem of the book: FLAGHOPPING In Baile an Mhóthair there 's a smell of fried fish from a house on a corner tucked into a hill beneath the walls of Dún Fearbhuí. A cock-robin, who must have been very old indeed, puffed up his faded grey-tinged breast and sang in a potato plot below the road beside a weed-free cabbage patch lately planted where onions had been harvested and now were laid to dry under a south facing wall. Swallows gathered on the wires and starlings fed in noisy whirring flocks on purple-headed thistles, grass, yarrow and meadow-sweet while two old ladies proud parade in island garb their mothers wore. Flag-hopping like town teenagers the ladies now perambulate from evening Mass, meandering in divers directions amongst breast-high parallel grey stone walls that shelter primroses and harebells in seasonal succession. In fissures in the stony crust I saw discarded trappings of modernity half hidden by folds of once green fern turned gold and rooted in sparse soil trapped in crevices zig zagging across the limestone slab now damp and shining in the island mist, itself a mystery medium, like pooled quick-silver lately wrung and spun from bright red cinnabar. Some hydra-headed thistles grew near Ceann Gainimh bristling like crew-cut American tourists in Galway while three-toed tracks of a solitary herring-gull, come to feed on stranded flotsam, left a straggling trail across the sands wet from the receding tide. A pattern like coal-black flames was left imprinted on the shore formed by the rills of wave remnants as they back-flowed across the sloping beach washing the light layer of silver that thinly lies upon the blue-black grains piled up like dust around an old coal pit. Black-tipped feathers tumble before a soft breeze off the sea from whence their source, a drowned sea-gull, was washed ashore and left there high and dry. Near Calamore a startled pair of skylarks swoop up over a stone wall and dip behind a pair of pillars in the shape of tar barrels and clearly moulded by them, their encircling cement ribs leaving me wondering how they got the barrels off again when set. Between the two unfinished piers a beached currach stood on it's keel - a wooden slat to save the stretched tarpaulin in it's coat of pitch - while a pair of men in yellow oilskins stood beside the gunwales untangling skeins of tangled net from fresh caught rust-coloured rock-fish, brown pollock and shark-like dog fish and a few pink gurnet which they deftly skinned and gutted with short sharp knives and the skill of surgeons washing the harvested white meat in the waves lapping at their feet and discarding the inedible to the wheeling clamorous gulls that circled over-head and cried in high pitched hungry calls as they swept with swift wing-beats like cirrus cloud in mare's tails in evening skies across the surface of the sea to snatch the visceral tit-bits from the waves to swallow them in one greedy split-second gulp. The white moon of early evening ascending over Inis Óirr, bespoke a hymenopterous communion bread, a cotton ball in the sky. The Cliffs of Moher were but a dark shadow as the sun sank behind Inis More and moonlight enshrouded Inis Meáin.

“The late Bryan McMahon in his short story, “The Crossing”, said, through one of his characters, that writing is “a compulsive venting of the fermenting cask of my passion”. I have always admired McMahon anyway but I have never found anything that so expertly defines ‘writing’. Many of my poems in this book were written at times in my life over the last twenty years when my head was literally exploding with feelings of one kind or another, from intense love through to dejection and near despair. If the person who casually takes up this book takes the time to read the poems within I think this will become very obvious. Starting with my Inis Meáin poems right through to poems about family and relationships at the end of the book I am only too well aware that I have probably exposed more of myself than many would care to do. I think I have a reputation for direct, no nonsense, plain talking and I believe I have done that in this, my first, collection. One thing that I hope does come through is my huge love and admiration for my late wife, Mairéad, who passed away since these poems were first published, for my parents, now sadly deceased also and for all of my children and grandchildren.”

MICHAEL PATTWELL was born in 1945 in Clonakilty, Co. Cork, Ireland. He has worked as a bakery worker, a Customs Officer a Court Clerk, a businessman and a lorry driver before he took up the study of law as a mature student in 1971 and qualified as a solicitor in 1976. He was appointed a judge of the District Court in 1990 and retired in 2011. He is also a woodturner and photographs of his work, as well as newer poems, can be seen on his website: www.michaelpattwell.com