The General Theory of Eco-Social Science

The Theory and Road Map for Comprehensive Reform 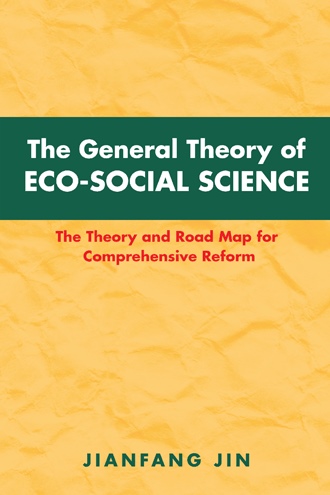 General Theory of Eco-Social Science originally in the Chinese language, has received the widespread attention of not only the Chinese media, but the leaders of China as well. The book first came out in 2011 and a second revised edition in 2012. The Chinese media has gone so far as to describe it as being of “epochal significance,” while some have even hailed it as “the blueprint for future reform in China.” The depth of its significance can be seen from the fact that already, its influence is evident in new policy changes made by the Chinese leadership, the political system rebuilding, and while the theory of “profitable currency” has clearly been adopted by the central banking authorities of China.

The General Theory of Eco-Social Science has made fundamental changes to Social Science; it introduces five new theories to the field of humanities and social science. ECO-ENTITY—An Entirely New Sociology It lays out an all new system of ecological theory integrating the social and natural sciences. At its core is the new concept of the “eco-entity,” its roles and inner systems, its rules, operation laws and operating mechanism. ECO-RESOURCES—New Philosophy and Management It advances the concept of “eco-resources”, expanding to the social relations of human beings, and puts forth the new theories of the monist world outlook of eco-resources, the dichotomy between positive and negative eco-resources, and the strategic management of eco-resources, through which it reveals a new dimension to humanities and social sciences. ECOLOGICAL SOCIETY—A Brand New Political Science It introduces the doctrine of an “ecological society” where the rule of law is replaced by the “rule of organicism,” and explains the operating principles and governance of the future ecological society. ECO-ECONOMICS—A New Economics It demonstrates with flow charts the economic growth cycle. It depicts the laws of commodity value and “eco-value.” It stresses the organic inter-relations between the government and the market. The author systematically expounded the economic growth cycle, the starting point, the methods, the principles, the mechanisms and the formulas, in his eco-economy growth theory. ECO -CURRENCY—A Complete New Theory of Currency It creates the new theory of Eco-currency, three basic attributes of currency and three major functions of currency. The author proposes a new eco-monetary policy: management of role currencies, or a “visible hand” in adjusting the economy. In addition, he also illustrates the elements of eco-currency, a new currency, in detail.

Mr. Jianfang Jin, the author, received his B.A. in economics at one of China’s elite universities, Nankai University. Upon graduation, he was assigned to an administration and policy department of the Chinese State Council, where he was able to observe the overall political and e conomic developments in China. In 1985, he went to the U.S. on his own and earned a M.S. from Purdue University. Thereafter he engaged extensively in business in the U.S. and China, and was an eager student of the great social and economic changes occurring in the world in our times. Mr. Jin currently works as the CEO of a public company in Vancouver. Mr. Jianfang Jin is the director of the World Association of Eco-Social Science.