A thesis being submitted for the partial fulfilment of the requirements of the Cardiff Metropolitan University in collaboration with the London College of Commerce (an associate college) for the degree of Doctor of Philosophy. 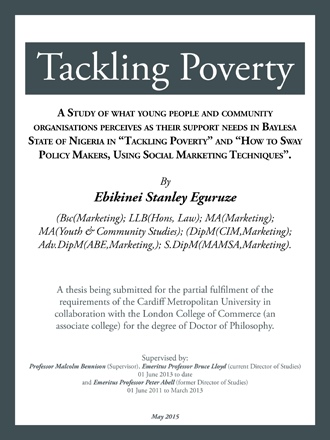 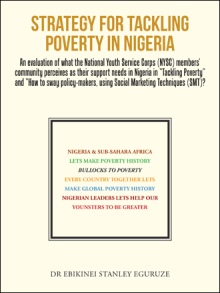 This study investigates what young people and community organisations see as their support needs in Bayelsa State of Nigeria in “tackling poverty. It also examines the process of influencing policy makers, using social marketing techniques. It seeks to expand understanding of the poverty elimination processes: not only within a developing country’s rural environmental context, but also endeavours to generalize the findings more broadly. It seeks an inclusive approach to policy determination driven by involving grassroots levels. A mixed-methods research design was adopted engaging a quantitative approach in which 300 young people were surveyed using self-completion questionnaires. In addition, a qualitative study in which policy-makers as well as young people and community organisations were interviewed. A discussion group methodology was adopted. Following the data-analysis, a strategy conference was organized in Nigeria, in which the major findings were presented and debated. This research has improved on the previous Multi-dimensional Poverty Index by enlarging it and combining it with a current Social Marketing Technique model. The new Multi-dimensional Poverty Index - Implementable Joint Programme of Action model is user friendly and retains the multidimensional paradigm. This extension was achieved through the literature research, the development of methodology, adopting mixed-methods approach and the strategy conference. The main findings of the research show that young people and community organisations’ support-needs in Bayelsa State of Nigeria are far from being met. A great deal of additional support is required. The most significant causes of poverty amongst young people and community organisations are corruption of government officials, absence of jobs, low wages, oil pollution and IMF/World Bank conditionalities. It was also found that the main experiences of poverty include a high youth unemployment rate, lack of money to go to school, lack of money to start small businesses, less food to eat, no money to treat sickness, no money to buy clothes, no money to afford decent homes, prostitution, and absence of a public transportation system. The research considers the ways in which this additional support might be provided. Importantly, the research also revealed how extreme poverty could be alleviated, and by persuading policy-makers to create real jobs and job opportunities as well as developing employability skills and improving agriculture. In addition, there is a need to attract investors/oil companies to Bayelsa State and to increase investment spending. The lack of social infrastructure and access to free education, steady electricity and free healthcare are also seen as problems. Finally, the research revealed that actively involving young people and community organisations in policy-decision making and policy-implementation processes, including setting new priorities, or re-directing, is likely to enhance the probability of ending extreme poverty.