Too Many Sparrows In Zaragoza 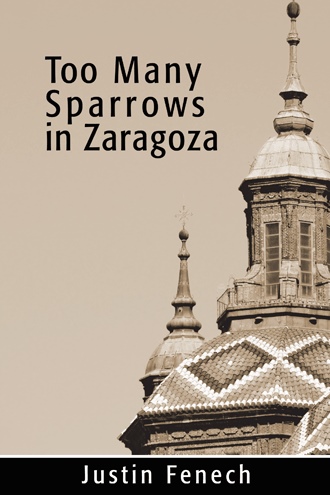 What a wonderful thought! Wasn’t it true that the meaning of life that philosophers argue over, if looked at from a natural perspective, was reproduction – sex? Wasn’t that the one urge all life shared, from single-celled bacteria, to giraffes, to humans? If life wasn’t programmed with the will to reproduce, and for its genes to remain immortal, it wouldn’t be here now. Luis was right, our will to immortality, whatever form it took, was a biological one. It united us with the whole of life on earth. What a grand thought. We spoke very casually again over our glasses of Port. Ironically we spoke about Portugal in a very relaxed, easy going manner like two students on a break in their canteen. Luis held his glass so elegantly, his little finger poking out into the air whenever he took a delicate sip, so much in character. Soon after we had finished Luis asked the waiter for the bill. It was almost midnight now, yet the place was busier than when we came in! A reminder, if ever one was needed, that one was still in Spain. Luis paid ever so confidently by credit card, with slow motions and a casual, concentrated look on his face that betrayed its modest origins. He thanked the waiter with glaring smiles, like those of electioneering politicians and took another sip from his Port as he waited for the waiter to return. “So where are we off to tonight?” I asked to break the noble, awkward silence, and to ease myself into the fact that the quiet night was now over. “Somewhere where it’s very difficult to behave ourselves.” I gave him a disapproving, frustrated look which he quickly remedied. “Which will make it even more admirable when we do behave.” He winked, perfectly in time with the waiter's arrival. Luis put his wallet into his pocket, paused, looked at me, and announced: “Shall we?” At that we got up and slowly made our way out of the still-packed palace of luxury that the restaurant had come to represent for me. Was it silly for me to find this insignificant restaurant more luxurious than all the old palaces of Valletta, Rome and London? It was obvious, for this luxury was still breathing, still enjoyable, whilst those touristic palaces were an archaic, historic luxury, as hard to enjoy as mould on a book. We emerged into the night. The now cleansed Plaza was busy with youthful energy, fashionable semi-gypsy girls and boys uniformed in their chic scruffiness. The night air had become far colder than when I had last felt it, though the sky was still clear and the stars were out in force. The stars and the sky itself somehow felt vaster than what I was used to, as if even the sky over Malta was smaller than the rest of the world. I was overtaken by a sense of vertigo, looking up at the stars, imagining the vastness of the universe. It gave me a headache pondering infinity. I felt like the daughter of a famous father, in awe of her father’s sheer brilliance. For weren’t we children of the universe, borne of sperm and stardust? I followed Luis to our destination, still a mystery to me. Luis now walked with his hands snuggled into his coat pockets, which now served more practical purposes. From the Paseo de la Independencia Luis took us into a narrow yet luxurious street which I'd never ventured into. Calle de Alfonso I was a long, pedestrianised street brilliantly lit by a river of streetlights, whose old character betrayed the New York-esque light they produced. The street was quite wide and full of shops, most of which were closed save for a few cafes with bus

How far can the good life go before it turns bad? This is the moral issue Nadi, the young psychologist from Malta, is made to face when she visits her old friend in Zaragoza. What starts off as a relaxing holiday soon becomes a revelation. The charismatic Maltese ex-pat Luis, her host in Zaragoza, has stumbled upon a lifestyle replete with eccentricities and the imagination. He is living a hedonistic, aesthetic, liberal life with a group of like-minded Spaniards. A group of young people rebelling against life's boring routine. They want to enrich their lives with constant beauty, inspired by Romans, Greeks, nature, al-Andalus, theatre and everything else life has to offer. Nadi is instantly taken in. She adopts Luis' lifestyle. But at what cost? In a time when traditional values and modern principles are colliding more and more, this is a relevant examination of moral values in the 21st century. All in the backdrop of rich, charming and regal Zaragoza.

Justin Fenech is a young Maltese writer, who is here releasing his first novel. A burgeoning poet in the local scene, with poetry known for its modern verse and naturalistic themes, here takes his next logical literary step. He has given talks about the role of science in art, has had poems published on various online journals and books, and was one of the winners of the 2010 IEMed Sea of Waves contest. He has also written several essays on the merit of the imagination in art, always with the aspiration to inspire new genres in literature. Among the styles he conceived are Imaginationism (a lot of these ideas feature heavily in this book), Chessboard Poetry, and the eclectic Muralism.