From Interrogation to Liberation: A Photographic Journey Stalag Luft III

The Road to Freedom 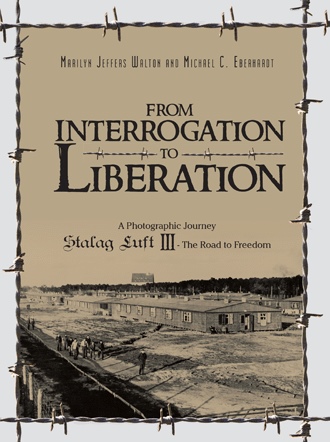 ….. As the German gefreiter (private) watched, Irv started to fill in the blanks. After he wrote his mother’s address, he skipped to the religion line. He traced a J for Jewish, but before he could continue, the young gefreiter quietly caught his attention and slowly shook his head, no, in a very discreet manner that would be unnoticed by others in the room. Irv was puzzled, but he assumed that he should have written an H for Hebrew instead, as it showed on his dog tags. His hand moved close to the card again to continue. But just then, the gefreiter stopped him. Where Irv had clearly written the J, the German wrote over it to turn the J into a P. Then he wrote Prot., to abbreviate Protestant. Without a word, and greatly endangering himself, the man felt a higher calling in a country whose official policy was the elimination of the European Jewish population, a policy equal to the madness of war.

….. With enthusiastic support from eight of the “early birds,” Clark decided to establish the first all-American room. In September, Dunn, Draper, Tovrea, Inghram, and Newton joined Clark along with three other Americans who had been flying with the RAF, Bill Geiger, Arvin McDaniels (at just age 18, one of the few teenagers), and Bernard Meyers. They called their room “Little America,” and it was in the same block with the Polish officers. Wing Commander Stanford Tuck and Squadron Leader Roger Bushell moved into the end room and joined the Americans.

….. Scharff took carefully-selected prisoners to the local cinema and out for beer. He was known to bring in his chief, who played the guitar, and would sit with his prisoner singing “Home on the Range” and “Lili Marlene,” the song much loved by both sides. He allowed selected prisoners, namely fighter aces, to swim in the local pool, and he set up meetings with German fighter aces so the opposing pilots could compare notes.

…..On one occasion, with a simple and casual remark indicating Scharff believed the Allies had run out of the chemicals needed to make white tracer bullets, as the planes were seen shooting red ones, he teased a rapid response from his subject, who stated with some bravado that there was no way the Allies were out of chemicals. The red tracers simply warned pilots that they should return home since their guns were empty. It was understood by the prisoner that Scharff and the German fighter pilots already knew the function of red tracers. Unwittingly, the prisoner had just supplied a vital piece of information to German fighter pilots, who seeing the red tracers, would from then on know the Allied fighter planes were defenseless.

…..Major David M. Jones, a flight commander on the Doolittle Raid against Japan in April 1942, soon came into the camp. He immediately began building secret hiding places for the camp’s growing inventory of civilian-type clothing and other escape items. He was well liked by all the men and went on to dig tunnels in the camp. Jones was shot down in Africa in December 1942 and was the first block commander in the camp.

…..The Germans flew the three to Sicily on a JU-52 stopping over there before flying on to Naples, Italy. At the airport in Sicily, the captured men saw a great commotion. Prisoners who had been aboard a German ME-223 transport flown out of Africa after capture, had landed just before the JU-52 and were being harangued by their German guards, who were threatening to shoot them when they arrived in Naples. As they deplaned, one paratrooper, who had smuggled aboard a timed-delayed thermite fire cartridge hidden in the arm sling of a captured doctor, dropped it down a hole in the plane’s floor. As he and the doctor were driven away from the German airport, the ignited plane burst into flames and burned to the ground. The unlikely saboteur was legendary paratrooper and Scottish military chaplain, Murdo MacDonald, who was with British parachute forces captured in North Africa.

…..The hard reality of war had not fully extinguished the humanity and compassion of the men who fought in that war. One day Lt. Col. Clark noticed that a lovely young woman had showed up near the wire and walked slowly around the camp. The attention of one of the Czech officers imprisoned in the camp was riveted on her. He slowly followed her around the camp from inside the wire without any conversation between them. After the war, Glemnitz told Clark that he had allowed her to do that and notified the officer that she was there, knowing that she was either his wife or fiancée. Her love had brought her to the camp. The kind gesture was even more poignant since the man she came to see was POW Arnost Valenta, one of the fifty killed after the “Great Escape.”

…..Meanwhile, three months passed as von Lindeiner’s subordinates in the camp were interrogated by the Gestapo. One of them knocked at his door and warned him that he must leave immediately to avoid being arrested and imprisoned in Berlin. Fearing what would happen to his family if he left, he decided to publically confront his accusers. He knew that the Gestapo preferred to do their dirty work before dawn, so he quietly packed a small suitcase and waited for them to come for him.

…..Towards dusk on February 6th, a German doctor from the hospital came in with orders for the patients to move out on foot, taking only what each could carry. He had treated them well despite losing his home and several members of his family to Allied bombs. That night the doctor was highly agitated and the prisoners learned he had been ordered to march west with them leaving his young wife and newborn baby, whose cries were so new to the world, to the mercy of the Russians.

During World War II, 300,000 United States Army Air Corps airmen were shot down. Of that number, 51,000 were prisoners of war or listed as missing in action. Bombardiers, positioned in the vulnerable bombardiers’ compartment at the front of the aircraft, were in high demand. The authors’ fathers were two such bombardiers, one on a B-17 and the other on a B-24. Like so many of the post-war generation, the authors traveled on their own emotional journeys to reconstruct their fathers’ WWII experiences. Their fathers fought in the flak-ridden “blue battlefield,” and like thousands of other airmen shot out of the sky, became prisoners of war. They would endure deprivation, loneliness, and great peril. Held at Stalag Luft III, where the Great Escape of movie fame took place, they, along with the British, were eventually force marched 52-miles in the dead of winter to Spremberg, Germany, and loaded onto overcrowded, filthy, boxcars, the Americans to be taken to Stalag VIIA in Moosburg, Germany, or to Stalag XIII-D in N rnberg. Languishing until their liberation in barbaric conditions with nearly 120,000 international POWs, they witnessed the death throes of the Third Reich. With many sons and daughters trying to explore the wartime histories of their loved ones, the authors supply crucial information and insight regarding the World War II POW experience in Europe. Often times, by necessity, that experience reflects the co-existence and tenuous relationship with the Germans holding them. In this book, there are stories that up until now have not been heard, and there are hundreds of pictures, many previously unseen, illustrating the prisoners’ plight. This book is a documentation of riveting history and a chance to vicariously live the war, told through their voices --echoes now fading with time. Their sacrifices to ensure precious freedom should never be forgotten.

Marilyn Jeffers Walton is a graduate of The Ohio State University, an editor, and author of six children’s books and World War II nonfiction. This collaborative endeavor is her tenth book. She has written two non-fiction books about police K9s and numerous magazine articles for World War II and Police K9 publications. As a World War II researcher, she has visited Stalag Luft III and re-enacted her father’s 52-mile winter evacuation march through Poland and Germany. She is the mother of three sons and lives in Columbus, Ohio, with her retired university professor husband. Michael Eberhardt is a lawyer in private practice, having previously worked for the U.S. Department of Justice, U.S. House and Senate Committees, and the Department of Defense. He is married with two children and resides in Dallas, Texas. His interest in the subject of this book stems from a 2011 trip to Stalag Luft III, where his father was held as a POW, as well as meetings and correspondence with ex-POWs, surviving crew members from his father’s B-17, and descendants of German camp personnel.