100+ Year-Old Hotels East of the Mississippi 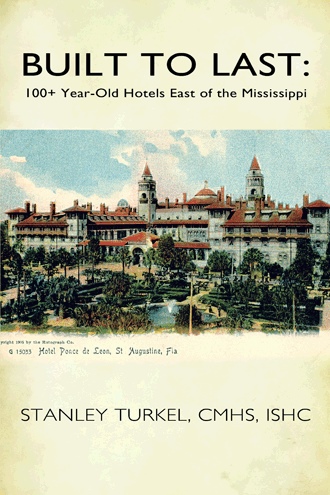 Willard InterContinental Hotel (1904) Washington, D.C. (394 rooms) American author Nathaniel Hawthorne observed in the 1860s that "the Willard Hotel more justly could be called the center of Washington than either the Capitol or the White House or the State Department." From 1847 when the enterprising Willard brothers, Henry and Edwin, first set up as innkeepers on the corner of 14th Street and Pennsylvania Avenue, the Willard has occupied a unique niche in the history of Washington and the nation. The site upon which the Willard stands was originally part of the farm of David Burnes. In 1816, John Tayloe built a row of six two-story-and-attic houses as an investment. By 1818, the corner was being used as a hotel. In 1847, Benjamin Ogle Tayloe leased the establishment to Henry A. Willard and his brother, Edwin who was replaced by his brother Joseph C. Willard in 1849. In 1853, the brothers purchased the entire row of houses from Tayloe's heirs, uniting the buildings architecturally in a major remodeling. In 1858, the Willards expanded again, purchasing the mansion of Col. James Kearney on the southwest corner of 14th and F Streets which they demolished and built a six-story addition to the hotel. Next an adjoining Presbyterian Church on F Street was acquired and converted to an auditorium known as Willard Hall. At the beginning of the twentieth century, a new Willard Hotel was built by the George A. Fuller Company to the designs of the famous architect Henry Janeway Hardenburgh. In 1922, a major fire caused the evacuation by Vice President Calvin Coolidge, several U.S. Senators, composer John Philip Sousa, movie producer Adolph Zukor and other attendees at the annual Gridiron dinner. Presidents Taylor, Fillmore, Pierce, Buchanan, Lincoln, Grant, Taft, Wilson, Coolidge and Harding stayed at the Willard. Other notable guests have included Charles Dickens, Buffalo Bill, David Lloyd George, P.T. Barnum and countless others. Walt Whitman included the Willard in his verses and Mark Twain wrote two books there in the early 1900s. It was Vice President Thomas R. Marshall, annoyed at the Willard's high prices, who there coined the phrase "What this country needs is a good 5-cent cigar." Situated just two blocks from the White House, the hotel is replete with the ghosts of the famous and powerful. It was at the Willard that Julia Ward Howe composed "The Battle Hymn of the Republic." Gen. Ulysses S. Grant held court in the lobby and Abraham Lincoln borrowed house slippers from its proprietor. Mark Twain, Charles Dickens, Nathaniel Hawthorne and Jenny Lind were all part of the parade of celebrated Willard guests. Even the uniquely political term "lobbyist" is said to have been coined at the Willard to describe those 19th-century special-interest promoters who cornered politicians in the opulent Willard lobby. The Willard sat vacant and in danger of demolition until 1986 when it was restored to its former glory. A $73 million restoration project was carefully planned by the National Park Service to recreate the hotel as historically accurate as possible. Sixteen layers of paint were scraped from the woodwork to ascertain the hotel's original 1901 colors. New York Times architecture critic Paul Goldberger wrote on September 22, 1986: Most restorations of venerable buildings fall into one of two categories; They are either attempts to recreate as faithfully as possible what once was, or they are inventive interpretations that use the original architecture as a jumping-off point. The newly rehabilitated Willard Hotel is both. Half of this project involves the respectful restoration of Washington's greatest hotel building, a distinguished Beaux-Arts structure by Henry Hardenbergh that had been derelict since 1968, a victim of the decline of its neighborhood, a few blocks east of the White House. The other hall is an exuberantly conceived, brand new addition containing offices, shops, public plaza and a new ballroom for the hotel.

“Built to Last: 100+ Year-Old Hotels East of the Mississippi” is a sequel to my 2011 book, “Built To Last: 100+ Year-Old Hotels in New York”. It has 86 chapters, one for each century-old hotel (of 50 rooms or more) east of the Mississippi River and each is illustrated by an antique postcard. The Foreword was written by Joseph McInerney, CHA, President of the American Hotel & Lodging Association. The book has been accepted for promotion, distribution and sale by the American Hotel & Lodging Educational Institute. My research into the histories of these hotels turned up fascinating stories about single-minded developers, brilliant and accidental architects, dedicated owners, famous and infamous guests and even the story of an underground bunker-shelter the size of two football fields built under a hotel to house the U.S. Government in the event of a nuclear war.

Stanley Turkel is a recognized authority and consultant in the hotel industry. He operates his hotel, hospitality and consulting practice specializing in litigation support assignments, asset management and hotel franchising agreements. Prior to forming his hotel consulting firm, Turkel was the Product Line Manager for Hotel/Motel Operations at the International Telephone & Telegraph Co. overseeing the Sheraton Corporation of America. Before joining IT&T, he was the General Manager of the Summit Hotel (762 Rooms), General Manager of the Drake Hotel (680 Rooms) and Resident Manager of the Americana Hotel (1842 Rooms), all in New York City. Turkel is an Emeritus member of Friends of the Tisch Center and lectures at the NYU Tisch Center for Hospitality, Tourism, and Sports Management. He is a member of the prestigious International Society of Hospitality Consultants and is certified as a Master Hotel Supplier by the Educational Institute of the American Hotel and Lodging Association. He served for eleven years as Chairman of the Board of the Trustees of the City Club of New York. Stanley Turkel is one of the most widely-published hotel consultants in the United States. His 250 plus articles on various hotel subjects have been published in all the major trade press outlets and posted on the Hotel-Online, HotelNewsResource, eTurboNews and BlueMauMau websites. His 2009 book “Great American Hoteliers: Pioneers of the Hotel Industry” was promoted, distributed and sold by the American Hotel & Lodging Educational Institute. His 2011 book, “Built To Last: 100+ Year-Old Hotels in New York” was called “passionate and informative” by the New York Times. Stanley Turkel brings many talents and accomplishments to his clients including his broad-based experience, his informed knowledge, his legendary perseverance and research capability and his sterling reputation.