THE DENIAL OF SCIENCE 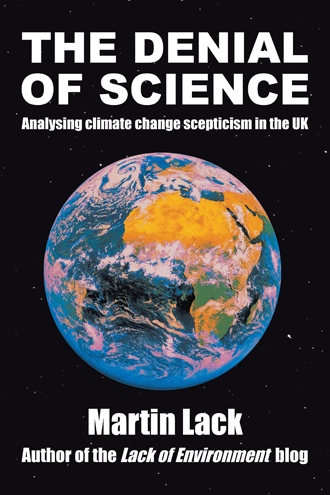 The subject of climate change is rarely out of the news today: whether that be as a result of the apparently-increasing frequency of extreme weather events of all kinds; or the publication of some new research findings relating to flowering plants, migratory birds, or the melting of permafrost, glaciers, and/or sea ice. Therefore, with regard to the latter, it may be pertinent to repeat a comment made by the NASA climate scientist Jay Zwally, as reported in the New York Sun newspaper on 12 December 2007:

In the second edition of The Rough Guide to Climate Change, Robert Henson has summarised what he calls the “climate change contrarian” position in the following way:

The atmosphere may not be warming; but if it is, this is probably due to natural variation; but if it isn’t, the amount of warming is probably not significant; but if it is, the benefits should outweigh the disadvantages; but if they don’t, technology should be able to solve problems as they arise; but if it can’t, we shouldn’t wreck the economy to fix the problem (after Henson 2008: 257).

In isolation, this has the appearance of a so-called “straw man” argument. However, not only does Henson admit that no single “contrarian” believes all of these things (ibid: 258), he then goes on to spend several pages summarising the scientific consensus view that negates each proposition in turn (ibid: 258-66).

With regard to the last of these propositions (i.e. the economic argument for not taking action), it may be significant to note that in the Stern Review: The Economics of Climate Change, Sir Nicholas Stern pointed out that our failure to deal with the causes of climate change may well be “...the greatest market failure in history” (2006: 1).

Thus it is possible that The Stern Review has been highly influential in prompting the UK Government, unlike that in the US, to adopt a proactive approach to tackling climate change. However, despite the likely adverse consequences (both environmental and economic) of any delay in taking action, it is arguable that progress continues to be impeded by those who would dispute the regulatory and scientific consensus; both here and in the US.

Furthermore, although the debate as to whether or not human (anthropogenic) activity is the primary cause of this climate change is well documented in the United States of America, based on the findings of preliminary research for the dissertation on which this book is based, the same cannot be said for the UK. For example:

• Both Betrayal of Science and Reason by Paul and Anne Ehrlich (1996) and Merchants of Doubt by Naomi Oreskes and Erik Conway (2010) are American publications that barely acknowledge the existence of the rest of the world.
• Globally, there are literally dozens of organisations promulgating climate change scepticism; but they are nearly all based in the USA.
• Whereas there are literally dozens of potentially key individuals in the US similarly involved, they are far fewer in number in the UK.

This may be one reason why the proportion of the US population that believes that we humans are changing the climate recently fell from 87% to 75% (Live Science 2010). What may be more surprising is that the equivalent figure for the UK population appears to be lower - at 70% (Dept for Transport 2010: 8). However, an equivalent figure for Earth Scientists is 82%; and for Climate Scientists it may even be as high as 97% (Le Page 2007).

However, in a modern representative democracy, governments need a mandate to act (e.g. Carter 2007: 358-9); whereas in the kind of participatory democracy that many environmentalists would prefer, action (to mitigate avoidable climate change) requires the majority of the population to be motivated to seek change (e.g. Smith 2003: 53-5). Furthermore, in Requiem for a Species: Why we resist the truth about climate change, Clive Hamilton reluctantly concludes that the most likely means to the required end of getting governments to take action will be widespread civil disobedience (2010a: 225).

Therefore, although scientific scepticism is healthy, widespread rejection of scientific authority is dangerous because, either way, it is likely to inhibit necessary action being taken. However, since ‘Climategate’, it would seem that such corrosive anti-scientific rhetoric has become even more visible and strident. Indeed, in Merchants of Doubt, Oreskes and Conway demonstrate that (in the US at least) this scepticism is actually being orchestrated by right-wing libertarian organisations with a vested interest in the maintenance of “business as usual”.

If so, this is very dangerous indeed because residual scientific uncertainty has been turned into unreasonable public doubt, thereby inhibiting progress on international agreement necessary to ensure collective action is taken to mitigate the effects of what is almost certainly a very serious global problem.

However, this is book is effectively the summary of academic research; not a demand for action on climate change. Therefore, although it is necessary to summarise the scientific consensus in order to delimit what it is that sceptics wish to “deny, downplay, or dismiss” (Wikipedia 2011a), care has been taken to do this in an objective fashion; so as to avoid any potential accusation of confirmation bias (i.e. setting out to find evidence for a theoretical position already held).

In light of all of the above, this discourse analysis was focused on the UK.

This is not a book about climate science.
Rather it analyses why some people dispute the reality, reliability and
reasonableness of this science. The validity of the scientifi c consensus
is therefore taken as a given, solely in order to analyse the views of
climate change sceptics who dispute it.

Nevertheless, most biological and environmental scientists do agree
that the scale of much human activity now exceeds the capacity of our
environment to sustain it, or to recycle the waste it generates. Using a
river as a source of water, a laundry and a toilet may be possible if you
live in a sparsely populated wilderness. If you live in a slum, however, it
is likely to lead to your premature death.

As such, many activities have become problematic simply because
of the rate at which we are carrying them out. This includes pumping
carbon dioxide into the atmosphere. Therefore this book addresses
the philosophical roots of scepticism, its possible misappropriation for
ideological reasons, and the psychological causes of denial. It concludes
by suggesting that ending this denial of science is an essential next step
toward a sustainable future in a post-carbon era.

Martin has worked as a geologist and hydrogeologist for over twenty years, including experience as both an environmental consultant and as a regulator. Having recently obtained an MA in environmental politics, he is now focused on trying to help humanity make sustainable development a reality. He currently lives in Cheshire.