The Winds of Barclay Street 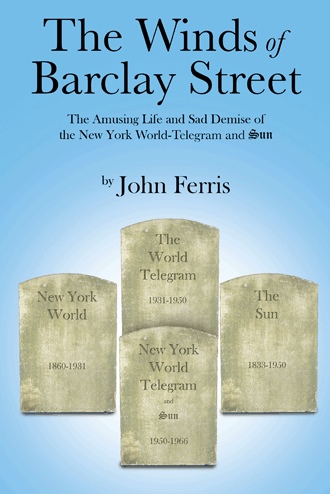 The atmosphere of the city room was buoyant most of the time. People were friendly. There was no open show of jealousy or envy, spite or malice, though these certainly existed. Some men bitched occasionally, some never stopped bitching about the hours they worked and the way MacDonald, and later Mockridge, regarded them. There was justifiable griping about salaries. The new reporter, whatever his experience, was accepted with good will. There were no barriers of age or competence. We always had a few mediocrities, men who showed no sign of ever becoming good reporters or good writers. They came and went over the years, but their presence never affected the paper's excellence. The explosions of words and immoderate laughter around the city desk often nettled the girls on the Woman's Page and their two male copyreaders, and even some of the distant reporters were annoyed; but this was mainly because they didn't know the source of the mirth and felt put upon when they smiled in spite of themselves. One day everybody was drawn into the fun. In the afternoon a man dropped in to see Ed Wallace, the paper's best humorous writer and most-photographed reporter. (A composite picture of Ed in coolie jacket, shorts, and bare feet drawing a rickshaw in which he sat in tourist's kit, pith helmet, and safari jacket, with cigar and cameras, was a staff favorite.) Ed's desk was halfway to the back of the room, an aisle desk on the wide space that separated news reporters from business and financial writers. As we were accustomed to seeing odd-looking callers at Ed's desk, nobody gave this visitor a second look, until he began making strange sounds. Still, we saw nothing unusual. Wallace was his assured, affable self, leaning back in his chair and smiling expansively. The sounds at his desk became more audible --a beep or a grunt or some other not-easily-identified noise. And then the show started, as the stranger let go with the most amazing repertory of imitative sounds any of us had ever heard. Wallace had met the man in the subway, where he was confusing people who thought he was sheltering a whimpering puppy under his coat. The man could imitate song birds, parrots, various beasts, hounds in pursuit of a fox, a snarling lion, a seal; but his best work was with the sounds of machines: fire engines, screaming ambulances, and fog-bound tugs and ferries. We listened but withheld our applause. At last we saw the visitor get to his feet to go. He shook hands with Ed, who waited as the rest of us waited. Vague sounds emitted from the stranger. Then we understood: he had become an old steam locomotive and a train of cars, preparing to leave a station. It hissed as it let off steam. It chuffed tentatively, hissed again, and chuffed. For anyone who had known steam trains, here was heaven indeed. You could see the engineer, hand on the throttle, leaning from the cab. You could see the wisp of steam escaping at the boiler top, the white jets spurting at the sides, the glow of the firebox and the fall of hot ashes, and hear the powerful chuffs that shook the station. ChudnoffUFF! . . .ChudnoffUFF! . . .ChudnoffUFF! Then two short, impatient chuff-chuffs. We were on our way. We were pulling out of the station. We yielded to the dream, as we picked up speed, clickety-click, clickety-click, clickety, clickety, lickety, ickety, ick, and then the noiseless rush, as we rolled over the gleaming rails through a peaceful countryside, where the telegraph poles became a picket fence, and people in fields and farmyards waved, just as they did in old prints. The visitor was walking to the rear of the city room now, trailing the glory of his sounds, watched by everybody; and as he reached the door that led outside, he sent a final salute --the faraway whistle in the night, a loving, lonely whistle that lingered in the air a full minute before the spell broke. Our applause was spontaneous, loud, and sustained. Lee Wood, who sometimes appeared to be in a state of perpetual puzzlement over the behavior of the city desk, came to the door of his office in the far corner of the room on the Park Place side and looked in our direction, as he usually did when the din penetrated his sanctum. He would show himself thus many times, glasses on the tip of his nose, a sheaf of correspondence or financial statements or bills in his hand, gazing across the intervening space of sixty feet, listening for a minute or two before retreating and closing the door.

John Ferris wrote The Winds of Barclay Street on behalf of the men and women who worked on the New York World-Telegram and Sun. After the prestigious newspaper's demise, in 1967, he often reminisced with his former colleagues, fondly remembering the antics and tomfoolery of fellow journalists as well as their reportage of serious news. Their past seemed a wondrous experience that must be preserved before it faded completely, consigning their signiﬁcant if often foolish history to oblivion. The Winds of Barclay Street recalls comical episodes of the reporters on daily assignment for news, as well as the highly-gifted staﬀ writers and editors who enlivened their working hours by writing ﬁctitious, amusing articles not found in straight news. The book covers the heady days of the newspaper's prime through its sad but inevitable decline and eventual demise due to economic and social conditions in New York City of the 1960s. Today the old Barclay Street is unrecognizable, as giant behemoths of architectural stone and granite cover the former location of a once-great newspaper and the small businesses of lower Manhattan. The Winds of Barclay Street recalls a lost era and the individual men and women who wrote a newspaper read by thousands of commuters on subway, bus, train, or ferry, and by subscribers at home.

John Ferris began his writing career as a newspaperman and drama critic for the Associated Press in 1931. He covered the Bruno Haupman trial, for which he wrote nearly 250,000 words. In 1942 he joined Newsweek as a national aﬀairs writer and later education editor. He joined the New York World- Telegram and Sun in 1951 and wrote a syndicated column that appeared in newspapers throughout the country. He was best known for his feature writing and his warmhearted, witty, seasonal weather articles. As a magazine writer, he contributed to The New Yorker, Life, Opera News, Horticulture, The Saturday Review and the travel and Book Review sections of The New York Times. He owned many books and his knowledge and understanding of James Joyce’s Ulysses were evident in his writings. His managing editor of the World-Telegram and Sun called him “a mighty man at the typewriter who savored a well-turned phrase or a deft shaft of whimsy ﬁred at a gloomy world.” At home on Sundays he enjoyed the challenge of the New York Times crossword puzzle, often completing it in ink. He died in 1993.