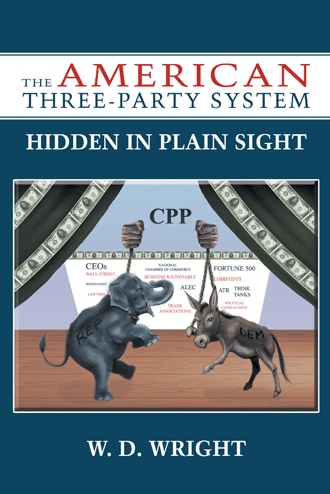 W. D. Wright has identified and provided a provocative discussion of the existence of the Corporate Political Party and a national three-party system, comprised of the CPP and the Republican and Democratic parties. Both the CPP and the three-party system have existed unknown to the American people since the late nineteenth and early twentieth centuries, hidden in plain sight.

The Corporate Political Party promotes the politics of deception, secrecy, and corruption—in short, anti-democratic politics. The CPP has two major objectives. The first is to establish a national one-party system by gaining control over the Republican and Democratic parties, turning them into shell institutions and functioning through them; this would be done, as it is presently occurring, by helping to get Democrats and Republicans elected to office who would be that in name only, while actually being Corporate Political Party candidates and elected officials wearing two labels.

The second major objective is to control the national, state, and local governments and their treasuries through the two shell parties, in order to be able to shift large amounts of taxpayers’ money on a continuous basis to its constituencies—rich and powerful individuals and financial, industrial, and commercial corporations—thereby seeking to create a large discrepancy of wealth on a continuous basis between its constituencies and the American population.

There is an urgent need for the American people to learn about the Corporate Political Party and take action against it for the sake of their own future, wealth, prosperity, and freedom in this country.

W. D. Wright, a Connecticut resident, obtained his PhD at the State University of New York at Buffalo. He taught Black and American history, and the impact of racism on both, for several decades at the college level. Additionally, he has published six books, providing provocative discussions on these subjects.