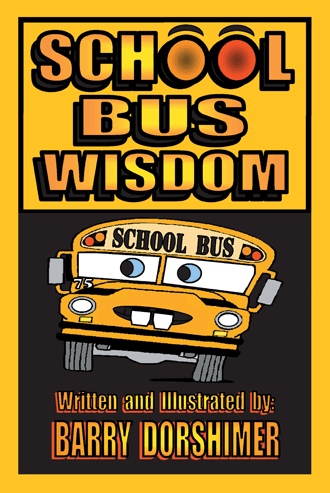 
Driving UNFOCUSED & IMPATIENT has similar effects to Driving Under Influence

The purpose of this book, "SCHOOL BUS WISDOM," is to aid the new school bus driver as well as the seasoned school bus driver in keeping their attitude, skills, safety performance and their interaction with students positive, professional, and sharp.

Every School Bus driver who transports a part of that precious cargo of 24 million students to and from schools across this vast nation every day, of each school year, will benefit from this book.

This book has a massive audience: Every School District throughout this country, as well as the contractors who serve School Districts which do not operate their own School Transportation.

The audience also includes Parents and Guardians of students who ride a School Bus and the combination of material would be valuable information for the students themselves.

Much of the information found in this book is not included in current school bus driving manuals or training materials. This is a collection of thoughts and ideas to help school bus drivers achieve positive results.

This safety tool would make an excellent gift for all school bus drivers who qualify for a safety award at the end of the school year.

Read a blog about the book through this link: http://schoolbuswisdom.com/blog/

In June of 2003, he retired from PPL Electric Utilities Corporation, in Allentown, Pennsylvania, following 37 years of service, as a designer in electrical drafting.

He also served as the Chairperson of the PPL Electric Utilities Corporation's SAFETY and HEALTH Committee, at their General Office Complex in Allentown, Pennsylvania, which consisted of 66 floors including a 23 story tower.

One common thread throughout the book is SAFETY, which is absolutely relative to, "SCHOOL BUS WISDOM."

Unfortunately he required surgery in September of 2007, to repair a detached retina in his left eye. During the four month period of recuperation, he could not drive a school bus due to the loss of some vision in his left eye. In great anticipation of getting behind the wheel of a school bus once again, he decided to write this book, while his eye was healing.

Following three additional eye surgeries, to correct his eyesight, disturbing news of reality was revealed to him, that his vision would never improve enough to drive a school bus every again.

Therefore his enjoyment of being a school bus driver, instantly became history and it became very difficult for him to continue writing to complete this book.

This book project became a brand new and exciting and fun filled learning experience for him and he hopes you enjoy it, and find it useful throughout your driving or riding on a school bus.