A Piece of My Heart 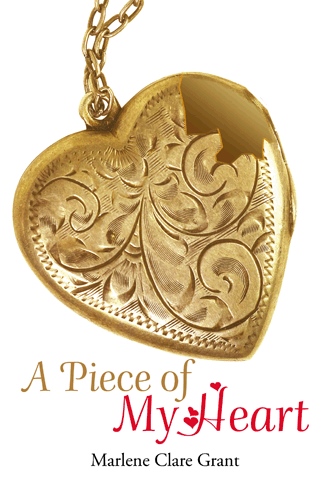 Nervously and with wide eyes Lurlene asked. ‘Joseph? What’s he doing in St Ann? He usually lets us know when he’s coming home. Maybe my father sent for him. I’d better get home Malc. I’m really sorry but something doesn’t feel right.’ She gave Malcolm a peck. It was so quick their lips almost never touched and she walked away. Malcolm gently pulled her back, looked deep into her eyes and said ‘Lurlene I love you very much. You and I are destined to be together. Nothing will keep us apart.’ ‘I love you too Malc. I feel so happy when I’m with you but I must go.’ Fear gripped Lurlene as she didn’t know what awaited her at home. She took a few steps away from Malcolm then returned; she reached inside her blouse and pulled out her heart shaped locket, which had Malcolm’s picture in it, she prised the locket open snapped a piece off and handed Malcolm the half without his picture. ‘Here, you keep this half. ‘Why?’ ‘I don’t know why I’m doing this. Just keep it. Think of it as a piece of my heart’ and with that she hugged him and hurried off home. Before her father could respond Lurlene arrived. As she opened the door and was halfway in the room her father sarcastically said ‘Let me guess why you are just coming home. You had to borrow another book from a friend as you returned Marcia’s – is that correct?’ Lurlene hesitated before she replied and thought to herself ‘I’m not going to lie any more, I’ll tell him the truth and bear the consequence. This has gone on long enough. I’m not a baby anymore.’ ‘Well are you going to answer or not?’ Asked Joseph. ‘No papa - you are wrong.’ She looked away from him and started walking towards her room. ‘Then where have you been?’ He screamed. Without looking in her father’s direction she mumbled ‘I was with Mal-Malcolm papa’. She whispered. ‘You was with who?’ asked her brother. He then raised his voice. ‘I told him earlier to keep away from you.’ Joseph held out his hands and twisted them as if wringing someone’s neck. ‘If I ever get my hands on him - I’ll strangle him.’ Mr Francis stood to his feet and said. ‘Lurlene, the Bible says “Children ought to obey their parents.” Lurlene placed one hand on her hip and pointed as she spoke ‘That same Bible also says “Fathers should not exasperate their children.”’ Mr Francis quickly stood to his feet, took off one of his sandals and flung it at Lurlene but she managed to dodge it. ‘Shut up your dirty mouth and get out of here!’ He yelled. ‘How dare you answer me back?’ When Lurlene was out of earshot Mr Francis calmly sat down shook his head and turned to Joseph and in his Jamaican Patois whispered. ‘A what dat college word she just use pan me. Hexasperate! A what dat mean Joseph.’ They both laughed and Joseph replied. ‘It’s exasperate papa – which is to wind up or annoy.’ Mr Francis then put on a posh accent and said. ‘Oh. I see. Exasperate!’ They chuckled some more. Lurlene stormed out of the room, slammed the door behind her; ran into her bedroom, flung herself onto her bed and began crying. She said ‘Why God? Why? Why don’t they like my Malcolm? He has done them no harm.’ She buried her head in her pillow and wept for some time then sat up and reached for her journal. Dear Malcolm, I stood up to papa and Joseph today. I’m fed up of their threats and also of them not liking you. I pray each day that God will soften their hearts and whatever happened in the past they will let go and look to the future. Our future together. I pray that their eyes will be opened to see that what we have is true love and as you always say “we are destined to be together.” Love is kind and true and so are you; Love is honest and sincere, you are too; Love is caring and comforting, and you are too; Love is you and will always be in you; You are very, very special, considerate, and kind-hearted; That’s why I hold a very special place in my heart for you. Saying ‘I love you is not enough but I’ll say it anyway I LOVE YOU MALCOLM! Your only spare ribs.’ After writing Lurlene drifted off to sleep with the opened journal on her stomach. When she awoke she lay on her back for awhile, pulled her locket out and stared at Malcolm’s photo. She kissed it and placed it back in her shirt. She could hear her father and brother talking softly. She crept up to where they were and listened discreetly outside the door. Her brother said ‘She’ll have to come back to Kingston with me.’ Her eyes widened and she put her hand over her opened mouth.