ACM, My Other Man

In Love With Two Men At The Same Time 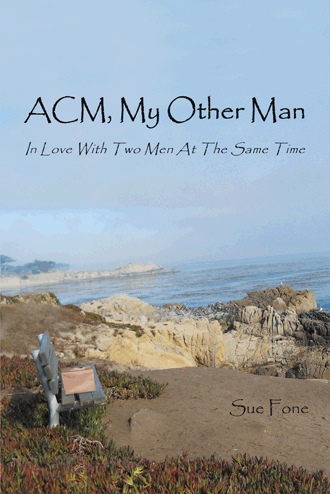 It looked ordinary, like so many boxes delivered in the past; however this one was different. This one wasn’t just a box; this one controlled and overwhelmed my emotions. The tears continued to pour, and I could feel my heart doing that familiar horrible, heavy, achy feeling again. After a forever minute, I wiped my tears and slowly reached down. I closed my eyes and my arms embraced it, and for a wonderful moment I could feel him.
In a state of numb awareness, I unlocked the side door and entered the house. My purse dropped on the bare laundry room floor, and the door slammed shut. I passed through the kitchen and into the living room to the small, empty table that stood against the wall. It was hard to let go. I took a deep breath, and then I placed the box carefully on the table. A perfect fit. I wasn’t surprised. Finally, I understood the reason for that table.
I stood still in a trance-like stare; then slowly my thought process returned and went backwards remembering the day I’d found that table. It had been a lazy, we-have-nothing-to-do afternoon, and my darling man and I were strolling Old Town. We wandered into one of our favorite shops, and I saw the table. It was just a table but as I walked, I kept looking back. I began having a hard time concentrating on anything else. It had a draw, a force that pulled me close.
I walked back to it. “I think I like this,” I said outloud but to myself. My words were like a big red flag being waved… a possible sale. The clerk moved quickly toward me already into her routine, “Interesting isn’t it? It’s a local artist’s idea of a barstool.”
“A barstool?” I was puzzled.
I stepped back to get a better look. It was a simple design—a bit over two feet tall with four straight legs and a top that looked like the lattice crust on a wonderful homemade apple pie but flat instead of bumpy. The finish was a nickel-looking polished and brushed metal. Nothing more, but something made me like it.
“Hmmm, I don’t need a barstool. Actually, I thought it was a small accent table.”
“Well now that you mention it,” went the pitch from the smiling saleswoman, “it does look like a table, doesn’t it?”
I needed another table like I needed a barstool with no bar but something inside of me wanted it, and I purchased without a second thought. We brought it home, and it was then that I took another look and wondered, What had I been thinking and what was the attraction? In truth, I could see it probably was meant to be a bar stool, simply by placing a cushion atop the lattice shelf which probably was in reality the seat, not a shelf.
It fit nowhere and matched nothing. Whatever possessed me to buy it, I had no idea. I wasn’t even sure I still liked it, but I knew I wasn’t going to return it. I felt an unexplainable need deep within to have it. I looked at it again and thought to myself, It stays. I’m not returning it. I’ll figure it out someday. Until that “someday”, I found an open spot where it could just be, and so it was, empty up against the wall for months. But now it stepped from the background and proudly held the box as if it had been waiting, existing for that purpose only. It was a perfect fit.
My eyes remained on the box. I wanted it opened. I wanted past the pain. I’d been rehearsing this moment since the call from his sister. Each time I used a different approach, but now it was real. None of the practice carried with it the true feel of the pain, and I found myself unprepared.
I walked away and tried to cover it all with busy thoughts, but it followed me. I knew no matter how long it took to open and pull out the memories, the pain was going to come. It had to. I knew that before I could smile and remember, I was going to ache for my loss. His name was Alfred Clay Moore. I called him ACM, and he was My Other Man.

The postcard read, “Don’t write no more, I may get a new address. Love U. ACM”

Alfred Clay Moore planned and carried out his suicide.
He needed answers to questions before he could leave, and it was his unaware best friend he turned to.
This is a love story between a young emergency room nurse and her aide, a self-taught man from the hollers of West Virginia, fifteen years older.
The story spans twenty years of their friendship: the games they played, the talks they had and the lessons they learned from each other. This is a heartfelt, poignant tale of a most unique relationship where role of teacher and student continually shifts from one to the other.
Although often touched by death in her profession, when she lost ACM, her other man, she had no coping skills for her own grief; she was empty for months.
In an effort to stay connected and able to feel him, she pulled out years of letters and pieced them together by date. Then with her morning coffee she re-read his words and traveled backward remembering, reliving and holding on to every moment she could.
Finally she understood the urgency of his need to feel completely secure and why he needed to know the answer to, “what would happen if…”
“ACM, MY OTHER MAN” pulls emotions from the heart, soul and mind. It’s funny, sad, even a little bit crazy, but very real to a West Virginia Hillbilly and “his nurse”.
This is one woman’s story of dealing with goodbye and a book for anyone who has ever lost a friend.
If you liked “Tuesdays with Morrie” and “Ghost”, you’ll love “ACM, MY OTHER MAN.”


"A warm, heart-felt story of a different kind of love between two of the most unlikely people you will ever meet. You'll laugh, you'll cry, and you'll think about all the weirdo's in your life that you've met along the way.
Once you start the book it will be hard to put down."
~Andy Petro author of "Remembering The Light Through Prosetry."

Sue Fone lives with her Darling Man and two dogs in Northern California.
With her nursing career behind her, she turned to writing… a passion since childhood.
This is her first offering as a published author.


She kept her promise to her Other Man by writing a story about him.
In doing so she keeps his spirit alive.