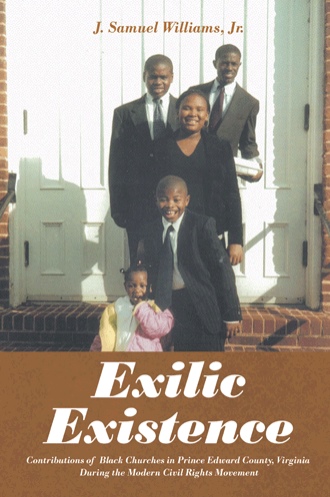 Reflections from Friends and fellow Ministers I met The Reverend J. Samuel Williams, Jr., on the campus of Shaw University in 1959, and I am privileged to call him a friend for more than fifty years. Having known him as I have, I am not surprised – but greatly impressed with the fact that he has seen fit to include the contributions of Black churches to the modern Civil Rights movement. He has chronicled the call of God and the response of humans for the sake of human decency with expertise and exactness in this moving book. It was my delight to have had dealings with his two most meaningful mentors, the late Reverend Drs. Vernon Johns and L. Francis Griffin, and I am sure that you will discover their role in the development of Brother Williams as he made contributions to the civil rights movement with his leadership, articulation and involvement of others in the struggle. In “Exilic Existence”, the reader will find several detailed accounts of the marriage of church and culture for the cause of decency and dignity among those who are too often considered the least and the left out in this society. Percy L. High--Durham, North Carolina It was my pleasure as a young college student attending the First Baptist Church in Farmville, Virginia to make the acquaintance of the Pastor, the Reverend Dr. J. Samuel Williams, Jr. Little did I know that I was in the presence of a Civil Rights activist with his finger on the pulse of the unrelenting, Movement. This historical record, Exilic Existence..., captures for future generations, important details disclosing and preserving the identities of individuals and documenting incidents which have contributed significantly to the report of our story in History. How fitting that the report is set straight by a Prophet from Prince Edward County. A must read for everyone who wants to know what really happened to bring us to this place in social justice and human equality. Dr. Carla E. Lightfoot, Immediate Past President of the Baptist Ministers’ Conference of Richmond and Vicinity (2007-2010) Associate Professor and Director of Undergraduate Studies, Richmond Virginia Seminary

Professional Biography of J. Samuel Williams, Jr. A native New Yorker, J. Samuel Williams, Jr. completed his elementary and high school education in Farmville, Virginia, located in the County of Prince Edward. He received a Bachelor of Arts Degree from the Shaw University in Raleigh, North Carolina and a Master of Divinity Degree from the School of Theology, Virginia Union University in Richmond, Virginia. Mr. Williams began to display early signs of leadership during the 1951 student strike at the Robert R. Moton High School in Farmville. This case, in addition to four other locations in this nation, was used as a “test case” which provided the impetus and foundation for the historic 1954 Supreme Court decision regarding education. His interest in civil and human rights was continued as he actively participated in protest demonstrations in Raleigh, North Carolina and Prince Edward County during the 1960’s at which time he and others were jailed for such actions. During his matriculation at Shaw, he assisted in the founding of the Student Non-Violent Coordinating Committee (SNCC) with Dr. Martin Luther King, Jr. and his staff in 1960. Having worked in the former Federal Office of Economic Opportunity (OEO) under the Lyndon Johnson Administration, his social concerns were extended to that of Head Start teacher, Deputy Service to America (VISTA) in Buffalo, New York and Planner for the Central Piedmont Department of Religious Studies at the State University of New York at Buffalo and Executive Director of the Department of Social Service for the Council of Churches. Mr. Williams has published articles in several periodicals: among these has been a weekly column in the former Richmond Afro-American newspaper under the title, “The Black Church Speaks.” Among his educational and missionary tours, he has traveled to Korea, Japan, Greece, Egypt, Canada, Guyana, South America; Jamaica, West Indies and Italy. The Ecumenical Service Award presented by the Catholic Dioceses of Western New York; and having been elected to Who’s Who in Religion in America are among his many accolades. The Virginia University (formerly Virginia Seminary and College) of Lynchburg, Virginia presented him with a plaque for his outstanding Deanship in the School of Religion, and he was elected to Men of Distinction in Oxford, England. He has pastored five churches including the historic First Baptist Church of Farmville, from which the 1954 Supreme Court Decision was partly launched. Presently, he is minister of the Levi Baptist Church in Prince Edward County, to which he was recalled in 1997 after twenty-nine years of absence. Mr. Williams was also a founding board member of the Robert R. Moton Museum, Inc. and has worked with the office of Multicultural Affairs at Longwood University for over eight years. Some of the activities in which he participated include: being the keynote speaker for the Martin Luther King, Jr. program, African American History month program, and at Longwood’s Citizen Leader Day and Kwanzaa presenter for the Festival of Lights programs. Mr. Williams is married to the former Lyllie A. Blanton of Farmville, Virginia and they are the blessed parents of three productive daughters and the grandparents of five aspiring grandchildren.