Much More Than Just A Game

by Larry A. McKenzie 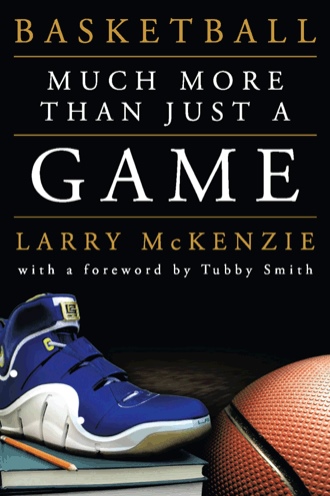 BUSINESS With all the hoopla and excitement, one topic that is often loss in the discussion of the game of basketball is its economics and the fact that it is a business. Like many of this country's early inventions it has experienced many transformations. As a young man growing up, basketball for me was just a game, no different than duck-duck -goose or rock -paper-scissors; it was something that brought friends together for fun and laughter. I t was something that I could do alone, always imaging hitting that winning shot or free throws as the clock was winding down, five-four-three- two-one! It was an opportunity for bonding with my dad who always shared his old school tricks or my younger brother by playing one on one, and of course I always won. We played two on two, three on three, four on four or five on five, always on asphalt or concrete, and without adult supervision. We played half court or full court and we organized the games and called our own fouls. My greatest childhood memory is playing hustle on twenty -one as is known today on a dirt patch next to a train track surrounded by mulberry bushes with a bike rim nailed to a light post, that could never happen today It was about having fun, competing, playing hard, and just simply trying to do and be the best player I could be. Your reward was respect and being picked first when you returned to the court. Traveling basketball for me growing up was going from Liberty City to play a team in Overtown on Dorsey Park. Modern basketball is played with uniforms and always in a gym with two or more courts, organized by youth sports organizations and supervised by adults, who decide when where and who can play. We picked teams by the first two players making a shot from the top of the key, today teams are picked by moms and dads, that usually include their son or daughter, their kid's best friend, and three others that can afford to pay the fees. That game that I once played for fun has blossomed into a mutli-billion industry where kids are used like chess pieces so that adults can be crowned kings or queens. The business of basketball includes selling sneakers, specialized training, traveling basketball, recruiting services, youth associations, and more but it strides on selling pipe dreams through the magic of smoke screens. The Fifth Dimensions used to sing,” You don't have to be a star to be in my show” Today everybody has to be the star! Most recently I was reminded by a mom that her son was ranked as one of the top player's in his class, and that he averaged 30 points a game on his other team, “if he wasn't going to be allowed to shoot when he wanted to, he wouldn't be playing anymore” It preys on adults who live vicariously through their kids, I didn't make it, but you will. Those who careers was ended by that vaulted knee injury or otherwise they would have played in the league, believing that there son or daughter is the ticket that will allow them to escape poverty or simply upgrade their lifestyle to that of the rich and famous. Believing that their son or daughter is the next Big Ticket (KG) or Candace Parker. Finally a chance for them to redeem the injustice of the coach who said they couldn't play or wasn't good enough, the burden that they've had to carry over the years. It begins with the innocent mistake of purchasing that Neff ball and the mini hoop that many of us proud fathers buy within months of our children's birth. We proudly watch and proclaim the great potential exhibited by our sons and daughters. For me it started with the purchase of a pair of fifty dollar Jordan's for my three month old son. It continued with anything advertised or worn by Orlando Magic and Penny Hardaway. Like so many parents with dreams of their kids getting a free college education or playing at the highest level, we begin to invest thousands of dollars in chasing the dream. You eagerly spend money on personal training, tryouts, traveling expenses and summer camps. But so often the return on investment is not what was hoped for. The business of basketball sucks us in, just like the bright light of the big city. No matter what's the age or the level you are playing at, make no mistake is all about business. Look around your community and you will find some type of youth sports organization or association. They operate under the premise of promoting good sportsmanship and quality athletic programs but what they really are organizations ran by youth sports entrepreneurs, and every entrepreneur I know is focused on market share and making a profit. Many of them have salaried staff and require membership fees. They are the creators of pay to play, organizing leagues and tournaments or private teams through which they generate millions of dollars. These major events become our family vacations, which generates dollars not only for the organizers but increase revenues for hotels, restaurants, and malls. It was reported that one small town in California hosting an AAU event generated a million dollar windfall, but the event sponsors made $45,000 in just tournament fees from 100 teams.

Larry McKenzie, the only coach to win four back-to-back state titles in the 100 year history of the Minnesota State Boys Basketball tournament is sharing his success strategies for “winning” on the court and in life. Much More than just a Game is a must read for young athletes and their parents navigating the game. Incorporating 10 life lessons, Coach McKenzie shows why BASKETBALL is merely a metaphor and a tool that can be used to transform lives.

A coach, educator, author and speaker, Larry McKenzie, the only coach to win four straight state titles in the 99 year history of the Minnesota State Boys Basketball tournament is sharing his success strategies for “winning” on the court and in life. Coach McKenzie shows why BASKETBALL is merely a metaphor and a tool that can be used to transform lives.

Larry A. McKenzie is currently going into his fourth season, as the Head coach of Academy of Holy Angels, was formerly General Manager and Head Coach of the Minnesota Ripknees of the American Basketball Association (ABA).


In nine seasons, Coach McKenzie and his staff developed the Patriots into one of the nation's top high school programs.

Prior to the arrival of Coach McKenzie and his staff, the Patriots had not won a State title in 55 years. Under McKenzie's direction, the Patriots established themselves as a team dedicated to hard work, tenacious defense, and a high-octane offense.

McKenzie's mission was to develop a championship program while also using basketball as a tool to empower young men to be champions in their classrooms, families, and communities.

By developing a highly structured program and a group of dedicated young coaches, the team showed tremendous improvement in the classroom, increasing the team GPA from 1.6 to a 3.1. In just two years 95% of the players had made the A or B honor roll.