The Joy of Bocce 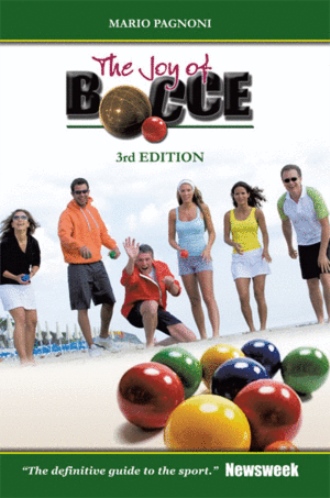 Bocce, though already catching on rapidly in this country, would really take off if it got the proper exposure. Hopefully this book will help. I'm not talking about it flourishing as a tournament event with complicated rules, state-of-the-art equipment, and high-powered authorities running (or ruining) the sport. I'm referring to a simplified recreational version that can be played by anyone almost anywhere. This game doesn't require great strength, stamina, quickness or agility. You don't need cat-like reflexes or the hand-eye coordination of an NBA backcourt man. Men and women as well as boys and girls of all ages can participate and enjoy the sport, making it as competitive or as laid back as they desire. It is well suited as a game for the countless physically challenged individuals worldwide because anyone who can roll a ball can play. Best of all, you don't need expensive equipment. And, played as described here, you don't even need a court - your back yard or neighborhood park will do nicely. You can play recreational bocce on grass or dirt, on level or uneven terrain - even at the beach (on the shore or on sandbars during low tide).

Bocce suffers from an image problem in America. People see it as an "old fogies' game" played at social clubs. The word bocce conjures up images of cranky old coots competing on customized outdoor courts. Arguing and kibitzing (sometimes even cursing - usually in Italian) and generally having a great time, these old-timers seem engaged in some sort of geriatric lawn bowling. It looks about as exciting as watching cactus grow in the desert. But it is a wonderful game, full of skill and strategy - one that requires finesse as well as some occasional brute force. This book attempts to dispel the misconceptions about bocce, and aims to promote it as a backyard game that is an ideal recreational activity for family cookouts, picnics, and other get-togethers. In addition, this book will help guide those who may want to take the game to the next level, whether it be the social club level, tournament action, or international play. Most of all, our goal is to get the word out on what has been called "the best kept secret in sports", bocce.

Bocce is booming! Learn to play the sport that just might be the most fun your family ever had in the backyard.

Mario Pagnoni is the author of several computer, education and sports books. His The Complete Home Educator (Larson, 1984) was a McGraw-Hill Special Interest Book-of-the-Month Club selection. In the foreword to that book, noted author/educator John Holt said of the computer information… “It is by far the clearest explanation of this difficult and rather forbidding subject that I have seen. Indeed, it is one of the best explanations I have ever seen of any scientific subject. Mario is a superb explainer…”

Pagnoni has written for The Boston Globe, REFEREE, and numerous other magazines. He also publishes the highly successful Joy of Bocce Weekly, an ezine connecting bocce aficionados everywhere. He runs bocce tournaments, bocce fund-raising events, corporate outings, and parties with bocce as the focal point. Find out more at