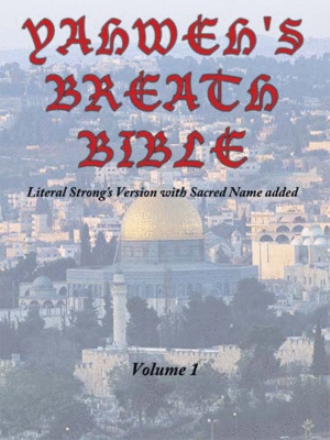 [1] In the beginning of the origin of time, Yahweh created the lofty sky and the firm earth, [2] and the firm earth came to exist like a laid waste like a desert and was empty, and darkness was over the face of the surging deep mass of water and the wind being the Spirit of Yahweh resembling His breath became relaxed like a hen sitting on her eggs fluttered over the face of the waters. [3] Then said Yahweh, “Let exist illumination,” and illumination began to exist. [4] And Yahweh saw that the coming of the illumination was good and Yahweh divided between the illumination and the dark. [5] And Yahweh called out and named the illumination “day” since it had warm hours, and the dark Yahweh called out and named the dark “night” since it twisted away from the illumination. And dusk came to exist and then dawn came to exist and they became unified to make the first day from sunset to sunset. [6] Yahweh said, “Let there exist an expanse being a visible arch of the sky severing like a bi-section in the center of the water, existing dividing between water and water.” [7] So Yahweh made the visible arch of the sky, and Yahweh divided between the waters which were at the bottom of the visible arch of the sky and the waters which were above the visible arch of the sky and it came to exist and be set upright as He had commanded. [8] Yahweh called out and named this expanse “sky” since it was lofty. Dusk existed and came to pass and dawn existed and came to pass. This was the second day with warm hours between sunset and sunset. 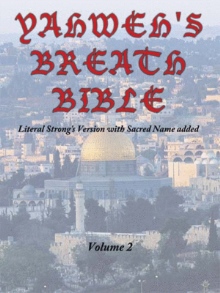 Yahweh's Breath is a unique Bible. In original Hebrew language it would be Yahweh's Nshamah meaning, 'Yahweh's puff or breath of divine inspiration'. It was written in the Literal form of the original languages of Hebrew and Greek and then matched with the New Strong's Exhausitve Concordance of the Bible, a thorough verbal index to the Holy  Scriptures.

It's one of a kind format puts the Sacred Name of our Father/Creator back into the text where it had been removed nearly 6,000 times by the scribes and translators throughout history. An outstanding feature also makes those hard to pronounce Biblical names easy as they were written in the original language of the script with the pronounciation following the name. Also, the meanings of some of the names follows the pronounciation.

Using the wording from the Strong's Exhaustive Concordance of the Bible gives His Word a detailed 'come to life' picture in your mind. At times you can see the glistening green grass or smell the fragrant smoke of spices. If you listen carefully you can hear the vibrating trumpet ram's horns or taste the sticky gummy syrup of honey. You might even be able to feel with your finger the scar from the spikes in the hands and feet of the Messiah.

Another feature of this version of His Word, the Bible, is that any added text by our Romanized translations that was not in the original text languages has been put back into its original form. Above all, this version makes reading and understanding His love letter to us about His Son easy and enjoyable.

Rev. Jerry Ayers is the founder and C.E.O. of Empty Tomb Ministries Foundation, an outreach to help the lost find tehir way home and to guide those without hope to the comforting arms of the loving Father. He has been a bondservant of Yahweh and a teacher in the body of the Messiah for over thirty years. Jerry considers himself a "Yahweh Chaser" who desires to constantly seek the loving face of the Father. His passion for Yahweh and his knowledge of the Word are communicated vividly through his writing. Jerry makes his home in Minneapolis, Kansas.