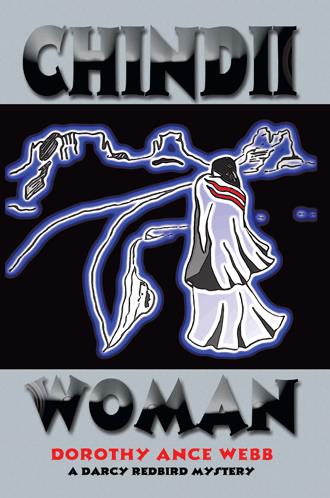 Darcy Redbird, a Lakota raised in Chicago, has come to the Navajo Reservation to find the cause of her brother Joe’s fatal accident in a dangerous canyon. She quickly learns that many similar accidents have also occurred there. The police report that Joe’s and the other accidents were blamed on alcohol, yet Joe didn’t drink. The local Navajos believe the spirit of the Chindii Woman is taking her revenge on the young men who dare to travel through the canyon at night. Darcy lacks knowledge of any Native American culture, and doesn’t believe in spirits. Now, with the help of her Navajo neighbor, Raymond Tsosie, Darcy uncovers disturbing clues that put them in danger and tests her belief in the perceptible.

The dual dim yellow light from the headlights of an old pickup truck pierced the dark night of western New Mexico.  Rocks, bluffs, and cacti were illuminated and cast fantastic shapes.  Native Navajos and Anglos alike were suspicious and wary as the dead bodies piled up.  Darcy Redbird, a Lakota from Chicago, has the vision to unravel the skein of clues, and bring the Chindii Woman into the bright desert sunlight.  David Hoekenga, author of The Hampton Court Murders.

Webb spins a story about the Navajo people much like Hillerman--but from a woman's point of view. A must read.  Judy Cicero Hilbert, Ph.D., Author of The Extraordinary Magic of Everyday Life.

Mystery has always been Dorothy Ance Webb’s first love and this is her first novel. She is an archaeologist of Laguna Pueblo, Chippewa, and Winnebago tribal affiliation. To develop this novel, she drew on my professional and family background, as well as her experiences while growing up on the Navajo Reservation where stories of the supernatural are a part of daily life.