A Collection of Personal Narratives 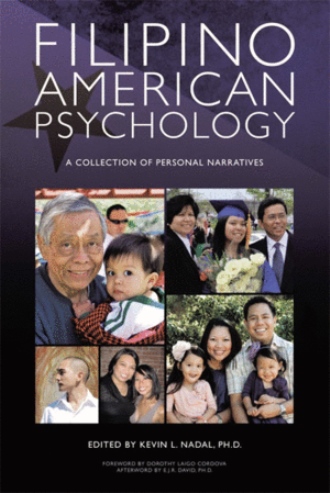 When I first wrote Filipino American Psychology: A Handbook of Theory, Research, and Clinical Practice, I had no idea what to expect. Yes, when I was in graduate school, a comprehensive book on Filipino American mental health issues would have been priceless. Yet, I never realized how many people had also felt that way. My book launched in June 2009, and I quickly embarked on a 50-stop book tour. I spoke in familiar places like San Francisco, Los Angeles, San Diego, Boston, and New York. I visited other places I hadn’t been to in years like Seattle, Chicago, Saint Louis, and Portland, Oregon. I lectured at college towns I had never been before like Burlington, Vermont, Charlottesville, Virginia, and Eugene, Oregon. I lectured in the public library of my childhood hometown of Fremont, California- the same place where I would go after school and read for hours (like any undercover nerdy student would). I had a book talk at the University of California Irvine (my alma mater) at the Cross-Cultural Center—the place where I got my first taste of activism and the building where one could often catch me napping in the middle of the day. I had book readings at college lecture halls, book stores, hospitals, performance spaces, community centers, high school conferences, and even restaurants and bars. And I even traveled to Toronto and London, which made my book tour an international one.

Over the course of these six months, I was both honored and humbled to witness the greater Filipino American community support me, a fellow pinoy, while also supporting the concepts I was presenting to them. I talked about cultural conflicts, the effects of colonialism, and the history of Filipino Americans in the US. Heads nodded as I discussed how we all have colonial mentality, and eyes agreed when I critiqued the discrimination that occurs within our community. I shared personal experiences of growing up in a large Filipino American community where I’d often see friends drop out of college, get pregnant during their teenage years, or suffer from various mental health problems. I talked about my high school that had a majority Filipino American student population, and how despite this large population, teachers never talked about race, nor did students learn Tagalog or Philippine history. I shared the educational, sociocultural, health, and mental health disparities that are negatively impacting our community—from the low college graduation rates of second-generation Fil-Ams, the high prevalence of cardiovascular disease, diabetes, obesity, HIV/AIDS, and gout, and the high rates of alcohol and tobacco use, depression, and suicidality. People of all ages would come to these events, from the lola who shared with the room that she had experienced “crab mentality” to the young college student who tearfully disclosed how she finally felt like someone understood her. In many ways, I related in some way to every single person in the room, and I experienced almost every single concept I presented. I was once a young person who really wished that I was exposed to Filipino culture in more meaningful ways, and not just through food and cultural dance. I was someone who has struggled with identity and still grapples with balancing my Filipino and American parts. I was someone who was probably the victim of crab mentality at some point, while also being the perpetrator of it at other times. I have suffered from colonial mentality myself; there were times when I wished I had lighter skin, there were times when I wished I wasn’t Filipino, and there were plenty of times when I’d feel happy when people would ask me if I was Latino or related to the Spanish tennis player Rafael Nadal. I had also witnessed divisiveness and discrimination in our community from all sides- as a gay person who has battled heterosexism and rigid gender roles, as an educated person who sometimes fails to recognize his privilege and access, as an American-born Filipino who rarely has to worry about immigration issues, or as a second-generation Fil-Am who is often told he isn’t “Filipino enough” for not speaking Tagalog or any other native language fluently.

I share this personal aspect of my life to demonstrate that while we as Filipino Americans do have a culture that binds us together, we also have our own individual stories. Our people have lived in the bayous of Louisiana, in low-income housing in the Tenderloin in San Francisco, in historical homes in the suburbs of Seattle, in the military bases of Virginia Beach, and even in the high-rise buildings in Manhattan. We have experienced discrimination when we tried to marry outside of our race, when we tried to buy our own homes, when we spoke with our strong Pilipino accents, and when we fought for Pilipino American Studies and Tagalog classes in our schools. We have served as soldiers in World War II and Vietnam, as nurses in public and private hospitals, and as professors of social sciences, education, and humanities. We are counselors, activists, doctors, teachers, mechanics, fashion designers, accountants, entrepreneurs, researchers, social workers, public health advocates, artists, athletes, politicians, writers, chefs, and post office workers who travel in rain, sleet, hail, and snow. We speak Tagalog, Ilocano, Visayan, Kapampangan, Aklanon, Ifugao, Maranao, Boholano, English, Spanish, French, and more. We are women, men, and transgender. We are heterosexual, gay, lesbian, bisexual, and queer. We are rich, poor, middle class, and working class. We are immigrants and American-born. We are privileged and we are oppressed. We are comfortable and we are struggling. We are loud and we are unheard. We are proud and we are ashamed. We are united and we are divided. We are parents, brothers, sisters, children, grandparents, titos, titas, nephews, nieces, cousins, grandchildren, kababayan, friends, and sometimes enemies. We are Filipino Americans.

Filipino Americans are projected to become the largest Asian American population by 2010. As the second largest immigrant group in the country, there are approximately 3 million documented and undocumented Filipino Americans in the US. Filipino Americans are unique in many ways. They are descendants of the Philippines, a country that was colonized by Spain for over three centuries and by the US for almost 50 years. They are the only ethnic group that has been categorized as Asian American, Pacific Islander, Hispanic, and even as their own separate ethnicity. Because of diverse phenotypes, they are often perceived as being Asian, Latino, multiracial, and others. And contrary to the Model Minority Myth, Filipino Americans have experienced several health, psychological, and educational disparities, including lower college graduation rates and higher levels of cardiovascular disease, diabetes, obesity, teen pregnancy, HIV/AIDS, substance abuse, depression, and suicide. Despite these disparaging statistics, Filipino Americans have made significant contributions to the US, ever since their first arrivals in October 1587- from their involvement in the United Farmworkers Movement to their roles in hip-hop culture and their presence in medicine, education, and the arts. However, Filipino Americans have also been referred to as the “Forgotten Asian Americans” because of their invisibility in mainstream media, academia, and politics. Filipino American Psychology: A Collection of Personal Narratives offers an intimate look at the lives of Filipino Americans through stories involving ethnic identity, colonial mentality, cultural conflicts, and experiences with gender, sexual orientation, and multiraciality. Writers courageously address how they cope with mental health issues- including depression, anxiety, post-traumatic stress, and suicide. Theories and concepts from the book’s predecessor, Filipino American Psychology: A Handbook of Theory, Research, and Clinical Practice can be applied through the voices of a diverse collection of Filipino Americans.

Kevin Leo Yabut Nadal, Ph.D., is a professor, performer, activist, author, and pinoy who received his Ph.D. in Counseling Psychology from Columbia University in New York. As an assistant professor of psychology and mental health counseling at John Jay College of Criminal Justice- City University of New York, he is the author of Filipino American Psychology: A Handbook of Theory, Research, and Clinical Practice. A California-bred New Yorker, Kevin is also a stand-up comedian who was named one of People Magazine's hottest bachelors in 2006. He is known for his activism within the Filipino American community and his advocacy for lesbian, gay, bisexual, and transgender rights. He was awarded a fellowship with the Robert Wood Johnson Foundation and he has been featured on The Filipino Channel, the History Channel, Fox News, Philippine News, and Filipinas Magazine. In his spare time, he enjoys walking the streets of Manhattan with his dog, Christiano Tomas, while soaking in New York nightlife, theater, art, and activism.