Kyle Oaks: Fight for the Throne, Unknown Threat and A Traitor on Nighta; Now all in one book!! 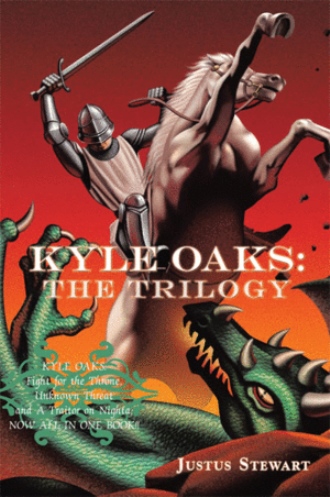 It has only been about a month since the war ended in Meepa and King Kyle is sitting on his throne feeling like a ruler again. He could not get everything out of his mind. King Kyle thought so much of Earth, the friends that helped him and how he missed them. He even kept thinking of that dragon he saw after he got back to his castle in Droegled after the war. King Kyle knew he needed a plan so that Nighta could stay in peace, but how? Well, he made Jordan his General Knight but what about the rest of the knights in other countries? What would his father have done in this situation? King Kyle's tired mind was running with thoughts; so he decided to go to bed and call a King's meeting to talk about how they can keep peace on Nighta.

King Kyle was sitting on his throne. It was a great throne with a high back and a very comfortable seat. The King would almost always fall asleep every time he sat in it. On the back and sides of the seat was a design of dragons that looked as if they were holding up Nighta, which was located at the top of the throne. King Kyle looked out across Droegled and just look into the sky at night. He stared out the window and saw a few dragons flying in the sky. Then he saw a mighty dragon. He thought, I wonder if that could be my dad or maybe even King Blanc, or maybe….he kept thinking. When a Nightan dies defending their country they get a second chance at life and comes back as a dragon, so it is usually hard to tell who the dragon was after he dies. King Kyle, by now, was very tired and started down the long hall and to the stairs to his bedroom.

"Finally, my bed!!” King Kyle said almost in a whisper.

He was very glad to see his bed and did not bother to take off his clothes; he just crawled into bed and fell right to sleep.

Later that night he had a dream. In his dream there were very bad things going on. Droegled was being attacked; there were fires across the land, knights dying and dragons falling everywhere. Yet King Kyle could not see who the enemy was. The scary part was no one could fight back because they did not know who their enemy was. In his dream he was looking all over for Jordan, yet he could not find him anywhere. He runs up to the castle's balcony to see if he could find Jordan or see who the enemy might be. He leans out more because he thinks he sees something on the ground down below. He looks harder and thinks it could be Jordan. “JORDAN!!” King Kyle leans over more and looses his footing and begins to fall. He starts falling off the balcony and sees the ground coming closer and closer. Finally he sees just what was on the ground. IT WAS HIMSELF!!! Just before he hit's the ground, King Kyle wakes up in a sweat, throwing his blankets everywhere screaming. Then he realized it was just a dream but it seemed so real. Jordan comes running in.

“Are you okay Kyle?”

Kyle replies, “Yes Jordan, but I had the worst dream ever. You will never believe what it was about.”

“Look Kyle,-” said Jordan, “-you had a rough few weeks and maybe all you need to do is to go on a vacation and relax.”

King Kyle then told Jordan, “I think you are right, maybe I should go to Thrypa for a day or two.”

“Or Kyle, maybe you can go to the third planet from the sun and visit your new friends. That way you can get away and not worry about Nighta for awhile.”

King Kyle thought that was a great idea.

“What about Droegled? I do miss my new friends and would like to let them know I am okay but I need to know everything will be okay on Nighta.”

Jordan replied, “I will take care of Droegled and we can tell the Kings you are away and will return soon.”

“Sounds like a good idea, but how can I get to the Earth?” asked King Kyle.

“I have more of the potion that Larry had but changed it with the help from King Placido so you can go and keep your memory.”

Well it seemed that everything was all set.

"Okay, I will go tomorrow as long as everything will be okay,” said King Kyle.

The next day King Kyle was ready to go.

“Thank you Jordan, you sure will.”

King Kyle opened the bottle and drank the purple liquid, and this time there was no green puff from the bottle. With a bright purple light, King Kyle was gone, gone back to the third planet from the sun.

King Kyle is a young King on the planet Nighta. After being sent to Earth and losing his memory by Larry, the evil dentist, King Kyle not only have to get his memory back, but also must make it back to Nighta and save his throne. Can King Kyle's new Earth friends help him out? All through the 'Kyle Oaks' trilogy, King Kyle, his brother and his Earth friends face many obstacles while protecting Nighta. In the 'Unkown Threat', they have to figure out how to defeat a powerful dragon. Who sent it? How can it not be killed? Where did it get all it's power from? Can they figure this all out before it is too late? In the 'Traitor on Nighta'; who would want to take over Nighta? Jordan, his own brother? Is he jealous of King Kyle? Is he even an Oaks? Who told him his family history? Is it Placido? He was once a great king and then imprisoned!! Who let him out, what does he know about the Golden Griffin? Maybe it is his Earth friends!! They are not Nightans. How can they trust an Earthling anyways? All the answers to these questions and more are right here in this trilogy!! Follow the adventure and enjoy 'Kyle Oaks' filled with magic, dragons, knights and kings.

Justus Stewart lives in upstate New York. He has two and two sisters. Justus started reading when in the hospital for several weeks with an illness when he was 6 years old. He started writing 'Kyle Oaks' at age 8 and was first published by age 9. 'Kyle Oaks' was a vision Justus had when he noticed kids his age was not reading books he enjoyed, such as Harry Potter, Narinia and other novels. Knowing how it also felt about being in a hospital for a period of time, a portion of sales from the 'Kyle Oaks' trilogy was donated to the St. Jude's Children Hospital, by money and care packages. At age 10, Justus also wrote a poem about the Iraq War which is included in this book. It is a view about how he thought kids felt about the War. He has been awarded a 'Shining Star' award from ACAP and a Proclamation from the New York State Senate. He also received letters from President Bush and Senator Little for all his efforts for writing. Today, Justus still enjoys reading but also enjoys playing the piano, guitar and drums and has a band with his friends. Justus is proud of 'Kyle Oaks' and hopes you enjoy reading 'Kyle Oaks' as much as he has writing it. ENJOY READING!!!