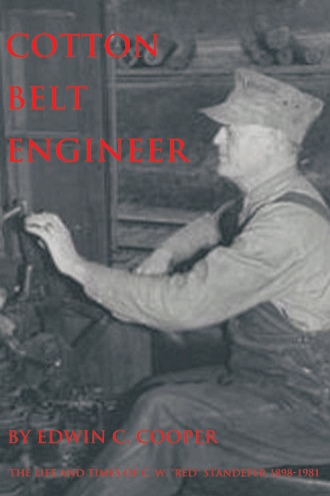 The very serious consideration to complete dieselization by Cotton Belt started in 1950. At the close of 1949 the Cotton Belt still had 110 steam locomotives with 55 new diesels keeping them company. The 110 steam locomotives were 14 Ten Wheeler 4-6-0s, two 0-8-0 heavy switchers, one Atlantic Type 4-4-2, 61 Consolidation Type 2-8-0s, 12 Mountain Type 4-8-2s, and 20 Northern Type 4-8-4s. The four Electro-Motive Corporation gas electric motor cars were retired in 1949. There were 32 diesel switchers, 28 were Baldwin built and four were EMD machines, the Baldwin double ended roadswitcher #260, 18 FT freight units, two additional FTs were on their way back to EMD for a rebuild, and two ALCO PA passenger units. , The Cotton Belt bought 19 diesels in 1950. All were from General Motors’ Electro-Motive Division. Four SW7 diesel switchers #1054-1057 were delivered, eight EMD F7A cab units #925-939 odd numbers only and five F7B booster units #926-934 even numbers only were delivered in the first half of 1950. The freight cab F units wore the Black Widow colors of corporate parent Southern Pacific. The two new passenger units, an FP7 #330 and a GP7 #320 were delivered in the Southern Pacific Daylight passenger colors. The Cotton Belt retired eight steam locomotives in 1950. The new diesels had a labor cost saving efficiency as compared to steam. The diesel did not need the amount of servicing that the steam locomotive did, or the water to make the steam for power, or the ash pits to clean the fire. In fact quite a bit of railroad real estate was taken up in steam locomotive servicing areas that the diesel simply did not need. The roundhouse was an example of what the steam locomotive needed for its care and what the diesel could do without. What was being considered by Cotton Belt was the outright displacement of the steam locomotive by the new diesel locomotive. Red Standefer had started with steam when he first saw Ernest Hickey driving that SN&ST construction train in 1907. That was the magic moment for Red. His entire railroad career was based on engine service with steam locomotives. He stubbornly stuck with steam until almost the very end of it on the Cotton Belt. Another foreign war had started in a far away place called Korea. Communist North Korea had invaded democratic South Korea on Sunday June 25, 1950. Once again young American men answered the call to arms along with many other United Nations countries on the Korean peninsula. A total of 2355 transportation employees worked for Cotton Belt in 1950.

This is the story of a Texan. This is a TEXAS story. We spell it big here because it is a big story. A big story about a man from TEXAS. A story about a man who as a young boy saw what he wanted to do, set out to do it and accomplished his life’s ambition. The man’s name was Cecil Standefer. The events in this book primarily happened in Texas between 1898 and 1981. He struggled some; had some personal losses and he overcame them. He grew up in a time when the United States of America grew to be recognized as a world power. His part in all that was that of a railroad employee. And not just any employee as Cecil Standefer was in engine service. He was in engine service for the St. Louis Southwestern Railway Company and he was in this service for 50 years. Cecil Standefer wanted to become a locomotive engineer from the very first time he ever saw a train. He achieved his life’s ambition by becoming a Cotton Belt Engineer.

Edwin Cooper became interested in railroads and their history at a very young age. His interest in the Cotton Belt stemmed from an article about that railroad by the late Jim Boyd in Railroad Model Craftman. C. W. Standefer's youngest grandson Mark lived in the same dormitory as the author. During his first year in college at East Texas State University in Commerce, Texas the author was introduced to C. W. Standefer by Mark Standefer. Years later while writing an article for The Cotton Belt Star, a publication of the Cotton Belt Rail Historical Society, the author renewed contact with Mark Standefer and found out about C. W. Standefer's photo album. The idea for the book Cotton Belt Engineer proceeded from that point. The author operates his own consulting business in Kentucky. He consults with public housing authorities and has worked with HUD programs since 1990. The author has been married to his wife Cindy since 1977, they have four children and eight grandchildren.