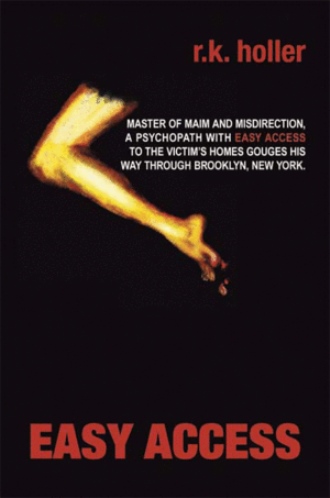 No break-in. No robbery. No rape. Just murder … by invitation only.

Knock-knock-knock. Expecting someone? Yes, but not a psychopath with Easy Access to your home.

Detectives face a crossword puzzle with all blackened squares. Is an article deliberately placed - a clue? A deception? Did that cause the NYPD to set in motion a series of merry-go-round theories?

Protagonist Steve Waldtrip is placed is placed on administrative leave from the NYPD pending an investigation into the death of his ex-wife. Problems escalate with an ongoing media battle, and his implication in the death of undercover cop, Joanne Newcombe. Another shadow is cast over Waldtrip when two DA investigators are gunned down. Not a good month for our colorful, headline-grabbing, ex detective.

The press dubs the killer, "Popeye," immediately giving the monster hero status. A highly intelligent adversary, systematic and ice-cold, has the law and our protagonist painted into a clueless corner.

In the end, Waldtrip figures out the WHY. And along with some luck … the WHO presented itself. That gave way to a gut-wrenching, see-saw finale.

R.K. Holler's fresh witty style offers readers an inside look at the attitudes associated with New Yorkers. They feel genetics give them the exclusive right to the sarcastic humor market. Holler … born in Brooklyn, N.Y. now resides in Orange County California, but his ghost is still roaming the streets of Brooklyn. Easy Access is his debut novel.