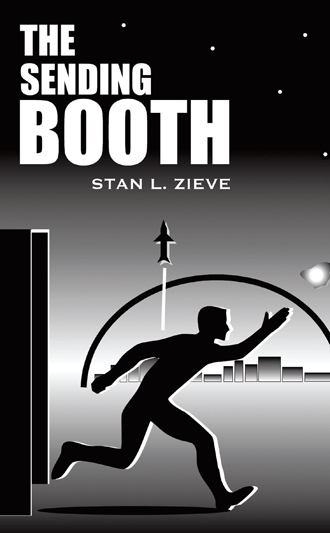 Jon asked Max, over the vid, if they were ready for her to commute back to him. He responded in the affirmative.

She walked back to the control box and once again, placed her palm onto the contact plate. At that same instant, contact J89 fell from its terminal point in chassis AO1 and shorted across the power supply! There was an instant flash of light!

When the light diminished, Jon was still standing at the control box at Tingle Weave! She was rooted to the spot, her hand still resting upon the palm control! She didn't move! A brilliant glob of light hovered near her head, tumbling and spinning over and over!

“Someone, quick!” Maggie shouted. “Turn off the power!”

The techs were already rushing to do so as Max peered into his Rad Ore view. “For pitys sake,” he shouted. “What's happening over there?”

No one took the time to answer him. They had rushed to Jon's side and were slowly pulling her body away from the now powerless contact point.

The glob of light continued tumbling over and over, until it hit the window of the room, and bounced back away from it. No one in the room noticed the strange happening.

“Get her into a chair, someone, please,” Maggie cried. “Get a Medic in here! Someone! Please, do something!” Tears were streaming down her face, with the realization that once again she may have lost her Jon, this time possibly for good.

As someone in the group yelled for a Medic, others were gently settling Jon's body into a chair. Although it had been stiff enough to have remained frozen at the control box, they were still able to bend her arms, like a life-sized doll, and her legs too, so that her body could be seated.

Maggie was on her knees, embracing the body. It was warm yet, as Jon's lifeless eyes still stared into space, just as if she were still about to commute on her return trip. Maggie sobbed unconsolably. When the Medic arrived a few moments later, he pulled Maggie away from Jon, to attempt a revival. Maggie continued sobbing uncontrollably, while the Medic took his readings.

“I can't find a pulse or a heart beat,” he said. “She's dead!” With those words echoing in her ears, Maggie again burst into violent tears and frantically tried to break loose, to again embrace Jon's body, but she was held firmly and couldn't do it. She continued her uncontrollable crying, while the mysterious light glob floated overhead.

“What is that thing?” How did it get up there?” What's it doing?” were some of the questions pouring from the confused workers as they noticed the weird light effect.

“It seems to be some form of energy,” one of them suggested. “Better not let it touch you; it might burn or even kill you. Stand clear of the damn thing, whatever it is!”

The glob continued tumbling through the room until it touched the corner of a desk. “It disappeared,” someone yelled. “Where did it go?” It re-appeared shortly afterward, from the other side of the desk.

“What the hell is going on over there?” Max yelled over the vid. “Won't someone tell me?”

Maggie finally broke loose from the grip of those holding her and rushed over to the vid. “You've killed Jon with your stupid machine!” she shouted at the view. “He's dead, and you're to blame!”

“I've killed who? Jon? Jon who? What happened to Marnie? And what's that damn glob of light, floating in the air? I can barely see it, at the edge of my view.”

Maggie regained enough composure to realize what she had just said. Calming down ever so slightly, she told Max that Marnie had been killed, when a flash of light occurred, just as she had been about to commute back to them. No one knew what the glob of light was. It had just appeared, at about the same time as Marnie was killed.

The glob continued to tumble about the room. Whenever it touched anything other than the window glass, it disappeared, only to reappear shortly afterward. The curious ones, at least the brave ones anyway, had followed its antics quite closely, mumbling to each other as it appeared and disappeared, time after time. Finally, it hovered over the still body of Jon, for a moment, before descending to it. When the glob touched Jon's head, it disappeared. And Jon opened her eyes!

“I'll be damned!” were her first words spoken, as she got up from the chair. Maggie, seeing her lover come back to life, fainted dead away. The techs couldn't believe their eyes, nor could the Medic who had just pronounced her dead. Max almost fell over his vid screen, as he watched Marnie Cooper's return to life.

“I can't believe it,” Jon was mumbling. “It's impossible, but yet it happened.”

“What happened?” Max yelled over his vid. “If someone doesn't give me some straight answers and quickly, I'll take the chance and commute over there to find out for myself!

“Calm down everyone,” Jon immediately yelled. “Everything's going to be all right; just settle down and go back to your duties, and Max, don't you dare try a commute over to here. I forbid it! No one, absolutely no one, is allowed to touch any part of the commuter here. If anyone does, I'll fire their ass on the spot!”

Jon Ryan's suspended animation flight into the 100-year future almost ends in disaster when his craft crash-lands on a deadly forbidding, radioactive planet.

Just managing to activate one of his cargos sending booths containing a mechanical robotic ABEX figure, he is able to receive help from Earth before the radiation can finish him off. In turn, Jon uses that magic booth to teleport himself to the safety of that future Earth.

To him, the wonders of this new world are mind boggling, as he is assimilated into it, praised and revered by the people of a power-starved world, for succeeding in reaching a radioactive ore supply that promises to power the world's fusion processes for eons to come.

An inadvertent booth body switch gives Jon a whole new set of problems to contend with. If that weren't enough, a former lover heats up the pages of the story, he invents a miracle cloth that responds to ones body temperature, new booth technology creates instant body transport, a chase for his rightful body goes beyond the domes where the reader meets the Clan, a fast, revolutionary cloning process is introduced and the most startling turn-of events of all, one's essence, one's very being, is freed from it's body to soar to the stars!

As his camera recorded births and deaths, disasters and happiness, presidents and paupers, sunspots and eclipses and love and hate, his brain was busy too, remembering it all.

Stan's imagination soared when using a computer keyboard, as he continued telling stories with “The Sending Booth”, a fascinating, open-ended, science fiction saga set 100 years into the future.

Now retired after 37 years with NBC News, Stan and his wife Felice, along with most of the offspring, reside in , where he no longer has to shovel any snow.