A Comprehensive Alternative to Supernaturalism and Mysticism 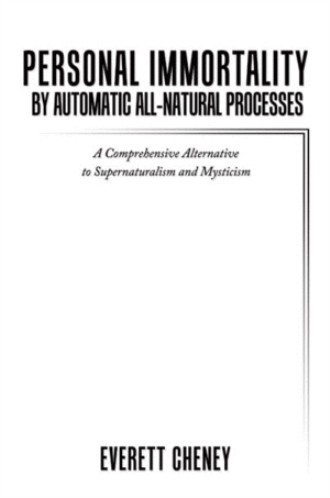 This book is about a unique whole world view from an all-naturalistic viewpoint. It sets out in a bold new direction toward a better human realization of personal happiness, freedom, and immortality.

The main content of this book describes and explains a comprehensive and coherent system of thought that is based on a simple but strong premise and faith that the entire Universe is a phenomenon of all-natural processes. This all-naturalistic premise and faith indicate that the Universe consists entirely of all-natural material, is driven entirely by all-natural forces, and is guided entirely by unchanging all-natural laws; and that every real thing, every real event, and every real condition of this or any other time has some kind of known or yet to be discovered all-natural explanation for its existence or occurrence. A person who subscribes to and has faith in such an all-naturalistic view of Reality is a Naturalist.

This all-naturalistic system of thought is presented in this book as a much more realistic, more believable, more rational, more accurate, more beautiful, more people friendly, and in every way a superior alternative to any and all of the many traditional systems of thought that are based on strong premises and faiths which indicate that the entire Universe is a phenomenon of supernatural or mystical processes; more or less designed, created, sustained, and presided over by one or more completely invisible and inaudible, but fully real, totally powerful, totally wise, and totally Supreme Supernatural Spirit God Concepts that have and use genuine supernatural, mystical, miraculous, or magical powers. A person who subscribes to and has faith in such a Supernaturalistic view of Reality is a Supernaturalist.

There are a lot of Naturalists in the world, but as far as I know, none has ever attempted to produce a really comprehensive and coherent all-naturalistic system of thought scenario that adequately describes and explains the all-natural Reality concept in its entirety, clearly telling how and why everyone lives forever by automatic and unconditional all-natural processes. The intent of this book writing effort is to do just that.

I am a totally sincere believing and subscribing Naturalist, and as such, I don’t believe that anything Supernatural actually exists or has ever actually existed outside of the prolific human imagination; i.e., all of the many claimed-to-exist invisible and inaudible magic working Supernatural Spirit God Concepts, along with all of the many lesser invisible Spirit Being Concepts, and their respective religion accouterments, consist of nothing more than human invented fantasies that date from ancient primitive times when invisible spirits and magic powers were commonplace in even the most advanced human thought.

But this book is not a proselytizing effort. It’s not my purpose to destroy personal religious faith nor make conversions, and I have little interest in doing so. Neither should this work to describe and explain an all-naturalistic alternative to supernaturalistic theism be considered an attack on any religion. It just consists of my sincere personal attempt to tell it like it really is.

But since so much is not yet known for sure about Reality, admittedly the all-naturalistic system of thought presentation in this book should be considered as only tentative; and of course, for the same reason, all of the many traditional Supernaturalistic Spirit God centered religion systems of thought should also be considered as only tentative as well; no matter what claims of certainty are made by their inventors, promoters, and subscribers. They don’t know for sure about much of anything either. Honest!

Even sincere natural scientists tend to agree that absolute certainty is so elusive that most of their amazing and painstakingly derived scientific findings should also be considered as only tentative. The simple fact is that sooner or later, nearly all human findings of every kind are subject to change and revision, as new human learning progresses. But don’t despair. As long as a finding seems consistent with observations, doesn’t violate recognized physical laws, and harmonizes with human reasoning, it’s probably valid enough for use as a guide for living one’s personal life at the present time. But everyone should always remember that just because a person says that something is so doesn’t make it necessarily so, no matter who that person is; and realistically, that’s the way it’s always been, throughout history and throughout the world.

The herein described and explained naturalistic life stance of All Things By Natural Processes puts all superstition, invisible spirits, and miracle and magic aside; and simply does not need any of the many claimed-to-exist invisible Supernatural Spirit God and Angel Concepts, nor any of their claimed-to-exist all-encompassing knowledge and unlimited magic powers, to describe and explain the phenomenon of Existence, give value, meaning, and purpose to our lives; guide us toward self-reliance, personal responsibility, right, and good; and assure personal immortality for us all; i.e., each and every one of us lives forever by unconditional automatic all-natural processes.

Naturalism, as described and explained in this book, leaves nothing for any kind of magic working invisible Supernatural Spirit God or Angel Concept to do.

Worldwide, more than a billion people already share all-naturalistic world views and values, but many lack an adequate chart to help navigate the rough and uncertain waters of personal living existence. This book is an effort to provide information to help the interested naturalistic reader formulate such a chart, and in the process, also explain how and why everyone automatically and unconditionally lives forever by forever ongoing all-natural processes.

The concept of all things by natural processes that is described and explained in this book, could give some people a whole new understanding of Reality, and change their lives for the better in important ways. And it might also inspire some people to more fully and enthusiastically participate in the celebration of life, and when their end times near, help them make their final peace with the darkness.

Everett Cheney is an older author with many years of observation, study and thought about the whole world scene.