The Only Prescription For Healthcare Reform

A Physician's Inside Perspective of the Real Problems Plaguing the System 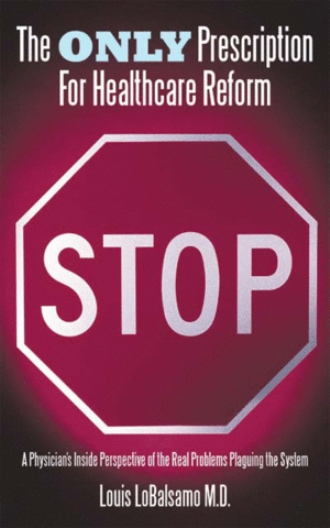 The state of the medical profession these days is in such disarray that unfortunately it appears that the demise of the real Primary Care Physician is inevitable.  I say the "real physician" because society now appears to accept non-M.D.'s in the role of the Primary Care Provider.

Much of what I want to say will be somewhat autobiographical but is also intended to educate the reading public as to what an experienced M.D. from a humble background has to say about what they need to know during these troubled times.  I have seen and experienced it first hand and it is now difficult for me to continue to sit back and not awaken this country to the reality of what they are experiencing everyday in the Medical Profession.

This unlengthy, yet concise narrative is meant to shed light to our leaders and the general public on the major issues crippling our healthcare delivery system here in the United States.

Stop!  You have found it!  This is the one.  Your search for the answer to Healthcare Reform is over.  This book is the one to read.  Why?  It is unique, concise, an easy read, informative, educational, and not bogged down by extra bulky text that only serves to thicken the book and confuse the reader.  It doesn't waste your time with meaningless or superficial material.

This book is written by a Board-Certified Physician specializing in Internal Medicine with many years of experience, an impeccable record, an analytical mind, and a lot of common sense.  Instead of wasting time discussing the secondary and peripheral features of the chaotic ways of the Healthcare system, this "Insider" strips away the "nonsense" and simply educates the reader about the few "core issues" that are the REAL causes of the Healthcare mess.  Only an insider of this caliber knows the "real deal".  His insight is astounding.

This quick read gets right to the point.  After you are done reading this book, you are guaranteed to know all you need to know to understand the problem.  It really is quite simple.  You will be amazed!

This book discusses the vital issues that you need and want to know.  Will you be able to continue seeing a REAL physician or will the Primary Care Physician become extinct?  How did our Healthcare delivery system evolve to such disarray?  Who are the actual culprits behind the determination of what really goes on?  Where do the Lawyers and Insurance companies fit into this equation?  You'll be surprised!  How much control over your healthcare treatment does your Primary Care Provider really have?  What is going on behind the scenes?  What should the public's role and responsibility be to help society get out of the mess?

Louis LoBalsamo M.D. is a Board-Certified Physician specializing in Internal Medicine.  His career so far has spanned seventeen years.  For fifteen of those seventeen years, he specialized in delivering Primary Care Medicine within the Private Sector and as an employee for the Federal Government delivering medical care to our Veterans.

His record is impeccable and his reputation locally is outstanding.  Prior to Medical School and Residency, both of which he completed at the State University of New York at Buffalo School of Medicine Consortium, he graduated Yale University with a Bachelor of Science Degree in Physics.  He has also excelled in the study of Mathematics and Logic since he was a child.  During his Junior year in High School, he was ranked within the top seven students Nationally in Mathematics by the United States Mathematical Olympiad Association.  He therefore has an unparalleled innate analytical and logical mind.  Problem solving has always been his strength.

He was born in Brooklyn, N.Y.  He grew up in the lower-middle class neighborhoods of Brooklyn and Long Island.  It is this background that also provided him with much needed common sense.  He worked hard to achieve his accomplishments.  Nothing was handed to him.  This uncanny combination of common street sense, an unmatched analytical mind, and intrinsic problem-solving capabilities, is what makes this author uniquely qualified to “spell out” and simplify the issues for his readers.

While in Medical School, he did medical research and published several Articles in Medical Journals.

Recently, he was listed as one of “America’s Top Physicians” by the Consumers Research Council of America; 2009 (www.consumersresearchcncl.org).