'Crucifixion' of the Child 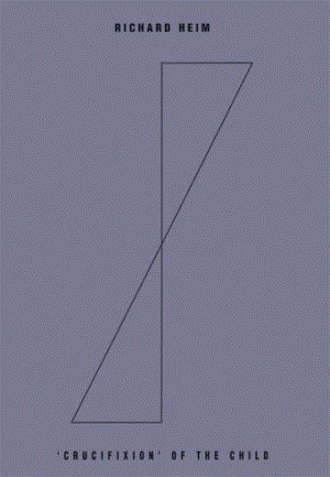 'CRUCIFIXION' OF THE CHILD. by Richard Heim, copyright 2009 All Rights Reserved

This 171-page nonfiction work is meant to be a personal companion volume which sets out the profound influence of child mistreatment upon religion and consists of entries on a myriad of related aspects starkly set out on separate pages for emphasis which many readers will find to be shocking and unusual. Among the topics are what evil really is, what Satan really is, resistance to freedom, removal of mule kicks and bites (the mule being metaphorical for the child abuser who is stubborn, strong and sterile, yet able to breed new child mistreaters.)Then there is crookedness in language, shamelessness, violence, vulgarity, cynicism, skepticism, revenge and the unknown/ unknowable.

One prominent section, about 65 pages, is the analysis and exposure as intellectual and religious fraud, in the author's view, of the writings of President Obama’s man in the pulpit, the Reverend Rick Warren, famous for his best seller, THE PURPOSE DRIVEN LIFE. This man is idolized by millions and no doubt means well, but his view is from a juvenile stage and fraught with many of the attributes normal in a juvenile but not in a whole adult. Those who follow his version do so because they, too, are stuck in a juvenile state and desperate for relief and are entranced. The reader might recall the controversy surrounding the participation in January, 2009 of this man in the Inauguration of President Obama.

THE PURPOSE DRIVEN LIFE, along with such movements as the Taliban, Al Qaeda, Socialism, the Roman Catholic Church and most mainstream faiths all seek to perpetuate, promote and preserve:

1. Juvenility in adults by doctrinaire notions that hamper normality;

2. The World-by-Magic view in place of the World-by-Logic one, painted as religious;

3. Actual or constructive slavery and false imprisonment (usually against women) and stealing, such as the current debacle in ;

4. The allowance of the killing of human beings in the name of

All of this is rooted in minds that come with abused, neglected or abandoned children grown up who are in:a resultant trance and living the ultimate life-lie which is that anybody can think his/her way into or out of anything. It is the acorn of the original lie hammered by parents into kids that they do not matter (shown by word or deed such as shaming,hitting,yelling,belittling, divorce, etc.) Kids believe it and lead lives thusly infected. They also harbor rightful rage. That rage spills out at the right opportunity. That trance enables, among many other things, the election in politics of addicts, law breakers, spouse-cheaters, the emotionally unavailable, and the ego-feeders. In fact, emotionally unavailable parents are usually behind that trance in their children.

Forty-nine percent of the world demands laws that force the giraffe to walk on its knees while another forty-nine percent pounds the table for laws that do something but they are in a chronic muddle and know not what. Only two percent knows. This book knows

Finally, the remedy is amply set forth and can be had by anyone serious and willing to do the emotionally hard work required to break that trance and to then pick up his or her life where it was broken off by unwitting parents who were themselves victims and a mere link in an endless chain back and forward. Children are driven out of their vulnerabilities and into their heads, cerebralization, the trance. Recovery brings back a life of being in one's vulnerabilities.

This work does not dismiss God but rather casts God as the final unknown, unknowable and overwhelming power that creates and, destroys ( ie. Acts of God).

Sueh is what Karl Jung was talking about when he observed that religion is a defense against a religious experience!

RICHARD HElM is also the author of ORIGIN OF MISERY ,2005, VERTICAL VERSE, 2006 and THE ORIGINAL LIE, 2007 which book was accepted into the Collection of American Literature at

THE INFLUENCE OF CHILD MALTREATMENT UPON RELIGION.

A PERSONAL COMPANION VOLUME AND STOREHOUSE AVAILABLE ON:

·        Such trance behavior allows the election of persons who are addicts, law breakers, marital cheaters and ego-feeders,

·        The emotionally hard work required to break that trance and to be free from the stubborn contamination that is to blame for the state of the world. It allows a reclaiming of vulnerability and an abandonment of cerebralization.

·        The unknowable mystery of God and the juvenile obsession to discover and dissect. God, the Creator, is also God, the Destroyer

·        Child abuse-dominated nations like and , one being in an atheist trance and the other, a theist one, as stark examples.

RICHARD HElM IS A NYC metropolitan area native who received his bachelor of Science degree locally and his doctorate in . He has long been interested in the mechanics of child mistreatment and neglect and the effects on society, the law, government and religion and the many gross misconceptions abounding.

Heim has had extensive hands-on experience with troubled families and mistreated children.

His varied interests include music composition, oil painting with solo and group exhibitions in and elsewhere including as a member of Pleiades Gallery in . Extensive experience with volunteer service includes hospital work in the ER and other departments, Chairman of the Selective Service Board #23 for 12 years, work for PBS-TV (Channels 24 in and 13 in NYC), work for Amnesty International in NYC, work on the 1988 Bush Presidential campaign, and other volunteer endeavors.

Past jobs include laborer, musician, tutor in languages and as as Pharmaceutical researcher, house painter and other occupations.

Heim is the author of ORIGIN OF MISERY, 2002, rev. 2005,ISBN 14208- 7975-8 ( nonfiction exploring the famous Changewater murders of Warren CountY,N.J. in 1843 with the execution of 2 innocent men in 1845 and parallels to modern society and jurisprudence). He also authored VERTICAL VERSE, 2006, Brunswick, ISBN 978-1-55618-213-6, a thematic verse collection on the banishment of human joy thru child maltreatment; GRACE UPON THE Rack, a 25-stanza verse published in April,2005,Venture Literary Magazine, Boston; and THE ORIGINAL LIE, 2007, Polygon, ISBN 978-0-9764768-3-2, a novel exposing the rampant misconceptions that adhere to the standard line in the childhood, life and works of Eugene O'Neill, the Nobel Prize and 4-time Pulitzer Prize-winning playwright. That book was added to the Collection of American Literature at , The Eugene O'Neill Foundation Library and the and the collection at the of at , .