Escape From Phnom Penh: Americans In The Cambodian War 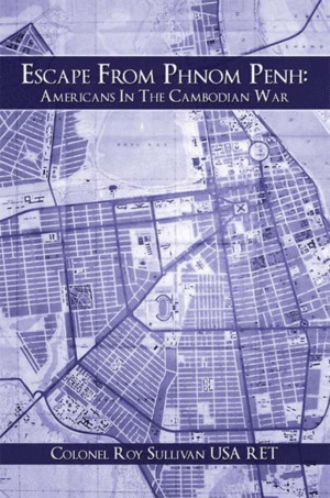 Army lieutenant colonel Sam Briscoe volunteers for a job in exotic, wartime Cambodia to escape the routines of Pentagon duty and an acrid divorce. His new job gains an unexpected dimension when the Army Chief of Staff assigns Briscoe a secret task while in Cambodia which only the Chief of Staff and an Assistant Secretary of State know about.

Once in Phnom Penh, Briscoe’s immediate boss, Brigadier General Cleveland, orders him to eliminate “phantom” soldiers from Cambodian army payrolls. Cleveland also admonishes Briscoe against advising the Cambodians and talking to reporters, particularly American ones. Briscoe quickly discovers that the pay for the non-existent or “phantom” soldiers goes into the pockets of their commanders. This introduces him to the fraud and graft rampant in the Cambodian armed forces as well as the government. Briscoe’s no win job is further complicated by an instantaneous--but forbidden romance--withAmerican freelance reporter Beth Keller.

Once the American ambassador, to whom General Cleveland reports, hears about the romance, he tries to blackmail Briscoe into coercing Beth to soften her scathing investigative reporting about diplomatic bumbling at the American Embassy.

While inspecting Cambodian infantry battalions, Briscoe unwittingly crosses the grey line between “advising” and “assisting” about which Cleveland warned. Beth Keller’s widely publicized article in U.S. media highlights Briscoe’s disobeying the U.S. Congressional edict, as well as his own general’s admonition against “advising.”

How Beth and Briscoe solve their personal problems, while balancing their jobs and precarious positions with the ambassador and general, add to the drama of the helicopter evacuation of Americans from Communist-besieged Phnom Penh. The struggle between the army officer, his general, the ambassador plus an embassy political officer stalking Beth ends with the evacuation. One of the four will be the last American escaping Phnom Penh. Another won’t make it.