by Eduardo Berdugo, Editor and Translator 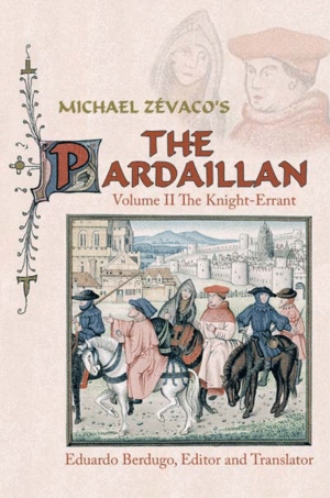 In the first days of April, it’s to say, when Pardaillan, well-dressed and transformed from head to toe, was nearing Paris, and when his son was trying to join Francis of Montmorency, we enter inside the palace of Mesmes, where Joan of Piennes and Louise were prisoners for some twelve days.

The marshal of Damville paced somberly and agitated in the great hall on the first floor.

He was disturbed, and upon finding Joan again, Henry felt taken back newly to his youth.

In the previous chapter we have seen that little by little his passions had attenuated until the point that he had not reproached Pardaillan at all.

Henry had managed to forget about Joan, or at least thus he figured it, but as soon as he saw her again and took possession of her, he understood that he loved her still. Perhaps his love took a different form, since now it was just pride, but he saw clearly that if in the past he had been capable of a crime now he would not hesitate to commit all kinds of violence and attempts to satisfy his passions.

“Before,” he thought, “when I observed her through the fence, at the cabin where she had sought refuge, when I felt my heart beat with force and my temples palpitate deafly, I used to tell myself that I’d never dare to come near her. My wishes were only that Joan would not belong to anyone else . . . , to ‘him’, to the hypocrite twee who seduced her with beautiful words that I’ve never known. Yes, I was then complacent with not seeing her ever again, provided that ‘he’ saw her neither. I remember that at this point when he wounded me, and I was taken to the castle by those lumberjacks, my most atrocious pain was to think that they were going to get together and everything that I’d done until then would have been for nothing. Happily, nothing like this happened, and when I learned that my father had disposed of the separation permanently, I had such an immense joy that it was good enough for me. Where does it come from, then, the love that I now feel?  Why didn’t I try to look for her if I loved her?”

The marshal stopped pensively and said to himself: “It’s because I hated my brother more than I loved her. That’s why the years could erase the love, when the hate was the same. And it was to the tune of that hate, to dominate him and to crush him, that I undertook this adventure from which maybe I won’t come out alive.” And he continued his pacing, proceeding with the monolog.

“Then, why does it bother me the fact that I found her? Why do I experience a passion I thought extinguished? Am I going to love her more than ever? Where could he be? Far from Paris, without any doubt. How much would I enjoy telling him that I’ve Joan in my power?”

While Henry pronounced those words, someone knocked at the door, and giving permission to enter, the squire appeared who had accompanied him at the of Pont-de-Cé inn.

Don’t miss the continued saga of the intrepid knight-errant John of Pardaillan caught in a web of treacherous and vindictive royal revenge! Why do the courtiers want to kill him? Why are Pardaillan father and son fighting against each other on different camps?

The long and bloodied religious war between Catholics and Huguenots (French Protestants) finally comes to an end as Queen Catherine of Medici through her handsomest and gallant son (whom she abandoned at birth to die) the Count of Marillac delivers to her cousin the Queen of Navarra Jeanne of Albret, his adoptive mother “. . . Here is what I propose: Long lasting and definitive peace the right of the reformed religion to sustain a priest and to build a temple here in Paris and with assured liberty to exercise their cult, ten strong bastions elected by the queen of Navarra with titles of refuge and guarantee, twenty court appointments for her coreligionists, the right to preach their theology, the right to access all employments, as if they were Catholics . . .” Or will she renege, a ruse to further her diabolical plans?

And finally, the mesmerizing encounter of Joan of Piennes with Francis of Montmorency, after sixteen-years of tumultuous separation comes to an end.