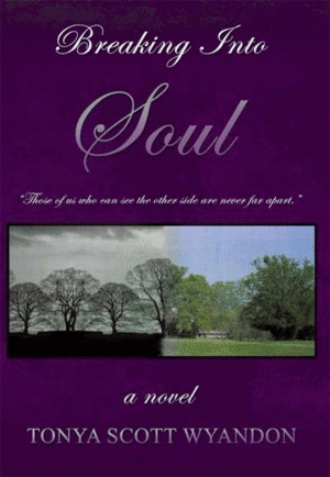 Ruby was still holding tightly to the gauze in her hand as she recalled Doctor Voltaire's instructions.  He insisted that she properly discharge of it herself.

Why does he have to be as superstitious as the others?  she wondered.

Ruby shifted her weight onto her left hip and stared out the window.  For a moment, she almost forgot she was holding her new baby girl.

And as southern superstition would have it, precisely seven days after delivering Blossom, Ruby hesitantly walked to the shed in the middle of a cold, rainy day.  She did not bother to use an umbrella, she did not care that she would get wet.  Ruby wore a large yellow raincoat with a pair of her husband's boots.  With her hands on the shovel handle, she dragged the tip of the blade through the grass as she marched.  Her curls quickly began to fall, but today her appearance was her least concern.  She was determined to accomplish the task at hand.

From the kitchen window, Lena watched as three-year-old Lynette sat on the floor beside her feet.  Lynette was content and playful, chewing on her favorite rubber toy.  Lena looked down at Blossom, now asleep in her arms.  She pushed the blanket away from Blossom's face to kiss her new grandbaby.  Lena began to fret.  She was worried about her daughter going out there all alone, but she knew better than to interfere.  Especially with the spirits.  So, she did what she was accustomed to doing.  Lena moved away from the window so she would not be noticed.

Ruby, with a determined mind, dug a small but perfect hole.  She paced the rhythm of her digging until she created a hole about three feet deep.  Placing her hand into her bra, she removed the veil.  It was still neatly wrapped inside of its original white gauze.  As the rain began to pour, Ruby looked up to the sky and tried to shield her eyes.  The pounding of the rain brought her back to her right mind.  Ruby dropped to her knees and carefully placed the wet gauze into the center of the hole.  With a rapid motion, she used her hands to push the dirt into the ground, packing it in tightly to secure its place.  As the rain continued, the dirt began to turn to mud.  Ruby knew this would not deter her.  She did not stop until she felt satisfied that her task was complete.  She needed to put this veil nonsense to rest.  Finally, Ruby looked around for an object to cover the hole.  Her chest heaved in and out from the exhaustion of manual labor.

Suddenly, the thought crosseed her mind that a stray animal or a rodent could uncover what belonged to her baby.  The uncomfortable thought made her body shiver.  Ruby looked around, searching for something to place on top of the muddy mound.  Lucky for her, her yard was filled with many pots, over-flowing with plants.  She grabbed on to the one closest to her, dragging it through the grass and stopping dead in the center of the mound.  Running for cover, she did not look back until she reached the door.

There, underneath a very large and shady pecan-bearing tree, Ruby left her worries.  She felt her body coming to life.  She now realized that it was pouring and this weather could be the very death of her.  Ruby closed the door and walked into the kitchen, soaking wet.  Lena was not there and she was glad the coast was clear.

Through the years, the large pecan tree outshone any tree or vegetation in her yard.  It was bigger and brighter and bore more pecans than its branches could handle.  Everyone in the neighborhood liked to come into the Sterlings' yard to pick their pecans.  Neither Ruby nor Abel would mind if they did, but there was one small stipulation.  No one was to touch Ruby's big clay pot filled with the purple hydrangeas or she would kill you. 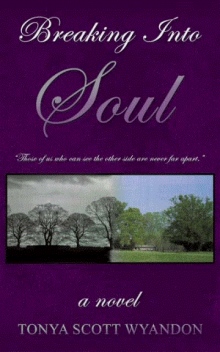 Blossom knows she’s different.  She was born with a veil, a thin membrane that covered her face, and gave her a special gift.  But for Blossom, the gift is so much more.

It is because of this supernatural inheritance, her life in the small town of is in stark contrast to that of her peers.  Only her closest friends, her inner circle, have been allowed to witness her abilities.

She finds a connection to Soul, a Norwood Indian girl, who lives in the backwoods of Bayou Sara, where her paternal grandparents own a farm.  Their similarities--and their differences--evoke a power struggle that ultimately defines Blossom’s destiny.

Breaking Into Soul is a mystical journey that traverses Southern traditions, Native American society, and the ultimate sacrifice of friendship for personal growth.

Tonya Scott Wyandon was born and raised in New Roads, .  She currently lives in .  This is her first novel.  Currently, she is working on her second novel, “Coming Into View,” the sequel to “Breaking Into Soul.”

For additional information, please submit to: