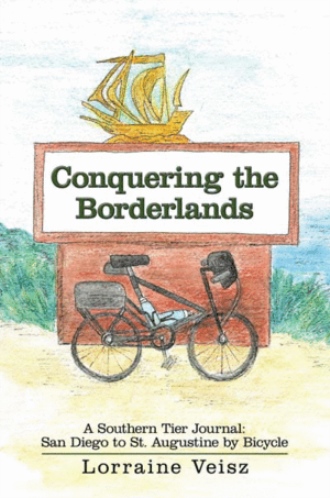 East of Globe our “,” now numbered Route 70, flattens out. The relatively tame elevation profile on my Adventure Cycling map is a pleasant change from yesterday’s climb. We haven’t gone far before I see Barbara stopped by the side of the road, and I pull over to see what caught her attention. She’s speaking to a scruffy-looking man who just emerged from a tangle of thorny bushes alongside the highway, which I suspect served as his campsite last night. He’s standing next to a bicycle with a cart attached to the back, piled high with what may be all his worldly belongings. Two tall flagpoles rise up behind his seat, one with a flag and the other with the black and white prisoner-of-war flag. There’s also a large antiquated-looking antenna attached to his bike, which he says is for his telephone. The man has been on the road for nine years, he tells us, and he’s headed for . I suspect he’s a veteran – he’s the right age.

I’ll call him our Ghost of Globe, after Jack Kerouac’s Ghost of the Susquehanna. In On the Road, Kerouac wrote about a ghost/man who emerged one night from a dark corner near the in . Kerouac was hitchhiking back to from at the time. He said that it wouldn’t have surprised him to see this “poor lost sometimeboy” out West, but he found it odd to see such a man in the “wilds” of .

The Ghost of Globe, a wanderer seemingly beset by the scars of past conflict, was indeed in a fitting place. For the next fifty miles, we’ll be riding across the 1.8 million acre San Carlos Apache Indian Reservation, one of the nation’s poorest. The Apache were the last tribe to lay down arms, but they could not escape the reservation system or its deprivations. Sixty percent of its nine thousand Apa

In terms of history, the Borderlands are the territories, from “Alta California” to “La ,” that formed the northern frontier of ’s empire. Conquering the Borderlands relates their histories, landscapes, and cultures as they unfolded during the author’s Southern Tier bicycle journey from to .

The Southern Tier route intersects the paths of Spanish conquistadors, stagecoach routes, and cattle drives, all of which come alive in the pages of this book. A ferry across the evokes Mark Twain’s account of life on the river; ’s bayous recall Evangeline, Longfellow’s poem about the Acadian exile from . Curious javelinas emerge on West Texas roads, carnivorous plants alongside highways.

On a personal level, the author describes the rigors of the trip    and the anxieties that spring from attempting a cross-country ride nearly forty years after the goal first captured her imagination. The author coined the term “chronological borderlands” for that stage in life when professional and family responsibilities have been met, and deferred dreams spring to life with a renewed sense of possibility, coupled with apprehension that physical limits may be closing the door.

The books is not intended to replace travel guides and maps, but to serve as a valuable companion piece that can further enrich the experience of Southern Tier travel – by bicycle, car or armchair.

Lorraine Veisz drew upon her experiences during a 3,160 mile bicycle ride from San Diego to Saint Augustine, her university studies and life-long interest in Spanish language and history, and nearly two years of research following her cross-country journey, to write "Conquering the Borderlands." Lorraine's background enabled her to combine source material from both Spanish and English language archives with her personal observations. Having finished this project, Lorraine is about to pack her folding bike aboard the sailboat she and her husband own, to seek new adventures on sea and on land.