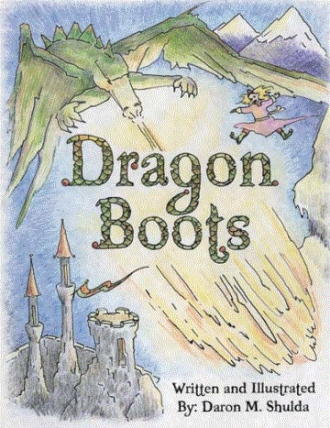 “How do you know my name?” Sydney asked.

The dragon licked its gleaming teeth with its fiery tongue and said, “You are the princess with the magic boots. You can run very far and jump very high. I have seen you, Sydney, and I have felt the tremor of your boots on the mountains.”

The steam from the dragon’s nostrils curled around the child’s face. She looked at her feet and stepped back.

“Those boots are very magical, my princess,” the dragon snorted. “Do you know why?”

“No,” Sydney replied, shaking her head with fear.

“Because they were made from dragon scales!” the angry creature roared. “I am going to take those magic boots, and then I am going to eat you, Sydney!”

Sydney screamed and ran away as fast as she could, crashing through bushes and jumping over rocks and trees. Her magic boots carried her faster and faster down the mountain! The dragon roared fire and jumped after her, swinging its tail and flapping its wings as it chased her.

Sydney jumped as high as she could from the mountainside, her arms flailing in the air as she fell for a very long time. Finally, she splashed into the middle of the cold, blue bay, and swam all the way to the bottom to hide.

The dragon was not fooled. It flew in a circle above the water, snarling and snorting fire, waiting for the child to emerge.

Princess Sydney's magic boots give her the ability to run very fast, and jump very far! She leaves the children of the village far behind when she searches for adventure in the surrounding mountains. Unfortunately, she is alone atop a mountain, when she meets an angry dragon.

In fall 2002, Daron M. Shulda's four-year-old daughter, Sydney, climbed onto his lap in the parlor of their big old house and asked him to tell her a story. She had been very rambunctious all morning, playing imaginary games, and running from room to room, clomping her boot heels on the hardwood floors. Thankful for some quiet time, Daron nestled into the corner of the couch and prepared to tell a classic fairytale.

He could not help but chuckle at the way the child was dressed. Sydney wore a frilly dress, a princess tiara, and a clunky pair of boots with high patchwork uppers and square heels. Inspired by his daughter's costume and her adventurous spirit, Daron spontaneously told the story of Princess Sydney and her dragon boots.

For Christmas that year, Daron printed copies of the story for family members and friends, and continued to write additional Princess Sydney stories for fun.

In fall 2004, Daron fully illustrated the original Dragon Boots story using India ink and colored pencil on parchment. That Christmas, family and friends again received the story as a present, complete with the exciting images.

In 2009, Daron M. Shulda is happy to publish Dragon Boots, with hope that it will be remembered as a loving gift to his daughter Sydney, and become a charming gift for other families.

Daron and his family live near Wichita, Kansas. The author works in the local aircraft industry and enjoys writing and illustrating stories in his spare time.